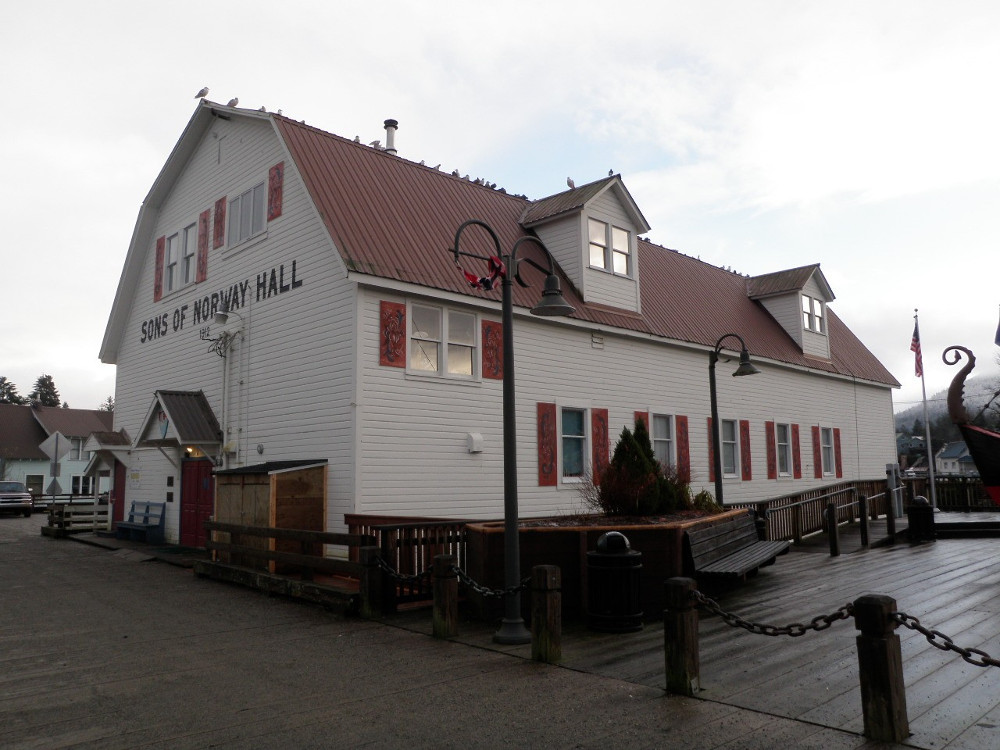 Among other changes, the new code would expand a downtown historic district to include Hammer Slough and Sing Lee Alley near the Sons of Norway Hall. (Joe Viechnicki/KFSK)

A wide-ranging revision of Petersburg code on zoning, construction and subdivisions passed the first of its three readings by the borough assembly this week. Assembly members are seeking more comment on potential changes and don’t expect a final vote on the new code until December.

The code revision creates new zoning classifications for service area one, or land within the old city limits of Petersburg. It sets new rules for what’s allowed and not allowed in those zones. It also proposes to extend platting authority, or subdivision layout, throughout the entire borough.

Local resident James Whitethorn didn’t like setting a limit on a caretakers dwelling on industrial land. “Prior to this there was no number at all,” Whitethorn said. “You could build as big as you want on either one of them as long as you are within the setbacks on your lot, on industrial property. So I would recommend that that 750 that’s mentioned in there a few times in your code book myself, I’d recommend having it the same as we had it before and primarily for the reason that it’s more tax revenue for the city if you keep it as large as you can and still fit on the lot.”

That residential use would be allowed on general industrial land as well as new classification, waterfront industrial land. It had initially been proposed for limit of 600 square feet but the planning commission voted to up that limit to 750 square feet.

Whitethorn also was against some restrictions on fencing height and placement for residential property and he asked for the code to recognize the practice of selling someone’s house as a timeshare.

The proposed code makes many other changes to current land use in the old city of Petersburg. It would allow a second living space, up to 800 square feet on residential property, something not currently allowed on single family residential land. That would allow tiny house construction and aims to bolster the amount of affordable housing in the community. It also proposes a more streamlined process for some permitting. And it creates two types of home businesses allowed on residential property, with different approval processes depending on whether customers or employees use that site.

The borough’s old code was adopted in 1985 and has been revised over the years. Petersburg’s planning commission has spent over a year to revise this new code language and recommended its approval earlier in the year. Earlier this month the assembly approved a timeline for its own review of the new local law.

Assembly member Bob Lynn wanted to revisit that approval timeline since the borough’s community and economic development director was planning to miss one of the public hearings. Lynn told Liz Cabrera he thought she should be available to answer questions.

“None of us here can answer some of the questions which the public might have and if we’re having a hearing and/or we can’t answer those questions and I really do think you need to be here, be present,” Lynn said. “Whether it be that meeting and I have no problem because it’s taken so long and there’s so much in it. I think we really need to look at extending this out over another meeting or two. Not say you shouldn’t be going but just to extend it out so that your presence is here because your presence is important.”

Planning commission chair Chris Fry said he would be available to answer questions for the hearing Cabrera would be missing.

Assembly member Jeff Meucci thanked the commission for its work on the new code and thought the assembly should vote on the proposal. “I’m in favor of this ordinance obviously but if assembly member Lynn at the next meeting wants to bring a revised schedule to push it back I mean I can deal with that,” Meucci said. “I don’t think the intent is to jam this down people’s throat but I’d like to see this document move along.”

Lynn’s proposal to extend the approval process into January failed by a 6-0 vote. The new proposed code passed in its first reading unanimously. New assembly member Taylor Norheim was not at the meeting.

Two public hearings are planned in November and the assembly is schedule for its final vote and consideration of changes in mid December.