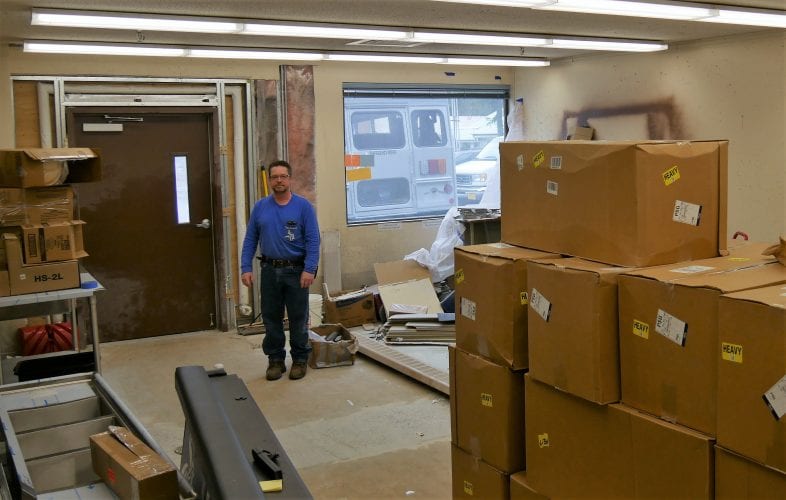 In May, 2018, Petersburg School District Maintenance, Director, Dan Tate, stands in what will be the first ever kitchen in the middle and high school. (Photo by Angela Denning/KFSK)

Petersburg School Board approved a $1.47 million contract for renovating the kitchen at the elementary school and building the first ever kitchen at the middle and high school. The unanimous vote came at a board meeting Tuesday night. KFKS’s Angela Denning reports.

The school board approved the contract bid of $1,473,322 for Jay-Brant General Contractors out of Homer, Alaska. The renovation project has been years in the coming.

“It’s going to happen,” said Superintendent Erica Kludt-Painter. “We talked about this last night I said it’s been how many years of talking about this? It has been signed, it is all in the right places, they cannot freeze us out again.”

Six years ago, the school district was approved for state funding for the project but it was pulled along with other capitol projects during the state’s fiscal crisis. Then on its own, the district started doing prep work for a kitchen in the middle and high school. Last year, the district got word that state funding was now coming through.

Since the amount had been frozen it doesn’t account for inflation. So, the district is pitching in $300,000, which the board also approved at its meeting. That’s money that the district already has, which was set aside for projects like this.

And the project plan has been pared down a little. Some of the work can be done in-house and Kludt-Painter says they are asking the contractor to work wisely.

“Reusing flooring that is only four or five years old, reworking any materials that can be reused,” she said.

It will be the first kitchen ever at the middle and high school. It will be a modified “catering kitchen” not a commercial one. The school’s lunches can be prepared there and it can be used to cook foods for extracurricular activities.

The kitchen at the grade school will see major upgrades. For years, it’s been an open floor plan with nothing dividing the cooks working in the kitchen from the students at the lunch tables. The new kitchen will create a larger space with an enclosed cooking area. Kludt-Painter says the space could also serve other purposes.

“One of the needs that happens in the elementary school is there’s no place really in the building to have all the kids at once,” she said. “Usually you have to truck them over to the auditorium, which is great, we have this beautiful auditorium and that’s nice for bigger events but it’s 15-20 minutes every time you transition kids. There will be space in that cafeteria.”

Even with modified plans, the renovation is still something to celebrate, said School Board President, Mara Lutomski.

The renovation project could start in the spring before school is out but most of the work will likely happen in the summer months.