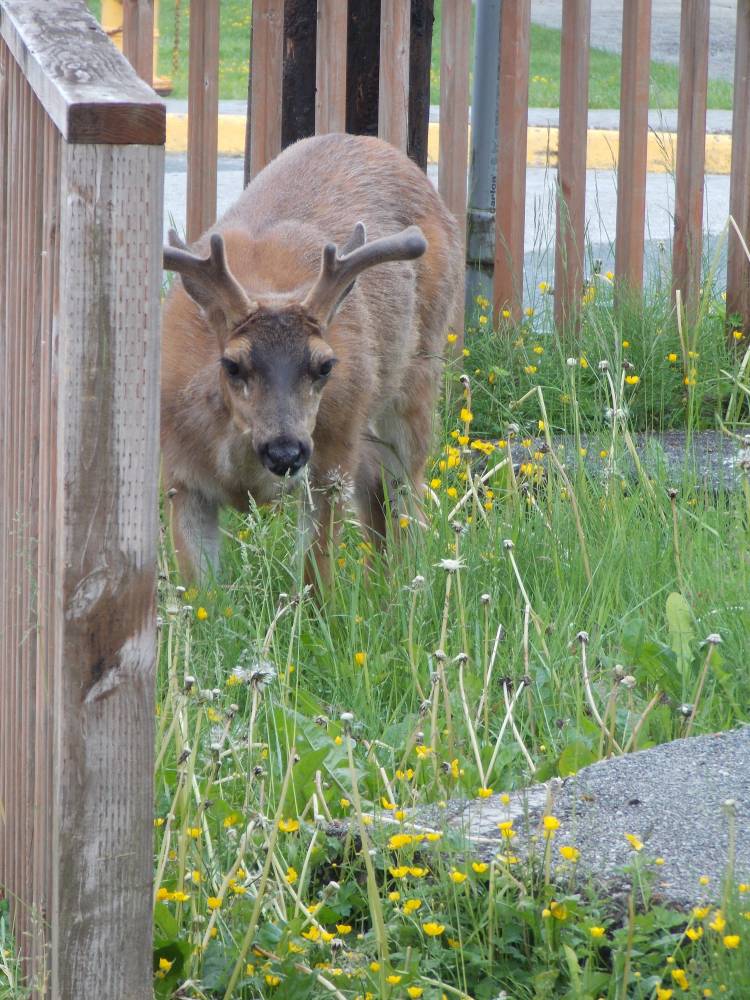 A buck grazes in the dandelions at KFSK (Joe Viechnicki/KFSK)

The state’s Board of Game meets in Petersburg next month to decide on proposed changes to hunting and trapping regulations for Southeast. Among the proposed changes is one to expand the area for an archery deer hunt behind Petersburg. The local Fish and Game Advisory committee supported the proposal at a meeting this month but recommended a change because of safety concerns.

The proposal pertains to what’s called the Petersburg Management Area, just south and east of downtown and the airport. Currently hunters have to be at least a quarter mile from the airport property or any homes, businesses or roads. 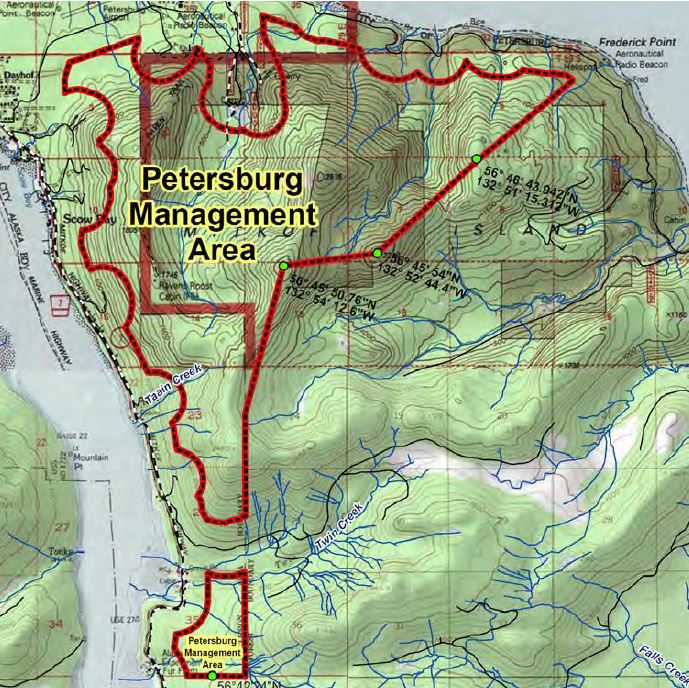 Archer Dan McMahon is seeking to reduce the buffer to 100 yards. “The whole purpose of the original hunt when it came around in the early 2000s was to use archers as a management tool to keep the deer population down in town,” McMahon told the committee during a meeting this month. “And though we take some deer every year, I think there’s probably a few more deer that could be taken, legally, by certified archers.”

McMahon told the advisory committee he requested information from the police department, which reported having to kill about 20-25 deer per year injured by vehicles on the island.
Fish and Game staff are neutral on the proposal and say there’s no biological concern with an increasing deer population on Mitkof Island and only a small increase in harvest expected.

The local group Devils Thumb Archers requested the special hunt and it was approved by the Board in 2002. The season runs from October 15 through December 15 and has a two buck bag limit. The hunting area includes the hillside behind the airport and Ravens Roost and out to Frederick Point. Hunters have to complete an archery class before participating.

Committee member David Benitz liked the idea of an expanded area. “I’ve hunted in this local hunt,” Benitz said. “And if you want to hunt where there’s some deer like up by the dump and stuff, it’s hard, to get a quarter mile from any trail or road. So I support this, I think it’s a great idea. Because that was the whole idea was a deer reduction program. But the quarter mile limit, when you get out there with a GPS and start looking around, it’s very hard to be legal, so I don’t even try. I haven’t hunted for years here.”

There was some concern about the proposed 100 yard buffer around trails and roads. Committee member Jerry Dahl asked about how far bow hunters can shoot. “I’m just saying if I’m walking down a trail and you’re 100 yards away from me are you going to hit me?” Dahl wondered. He said he supported the change but was asking for safety’s sake. McMahon responded generally bow hunters are shooting about 20-30 yards but weren’t very accurate beyond that range.

And Wildlife Trooper Cody Litster wasn’t concerned with the 100 yard range for bow hunters. “It would take someone pretty callous to take some half-witted shot at a 45 degree angle to get much more than your 100 yards,” Litster said. “So that part the state doesn’t have an issue with. What it will open up is some donut hole sort of areas, like the Hungry Point Trail, some of the places between, behind just back off of Sandy Beach, places where there’s trails where a hunter stalking a deer wouldn’t know about. So I would have concerns, the state would have concerns about those areas.”

The committee voted unanimously to support the proposal but recommended leaving out any of the area inside the airport loop, on the downtown side of Haugen Drive and Sandy Beach Road. Proposal 53 is the last in the proposal book to be considered by the board when it meets in January.