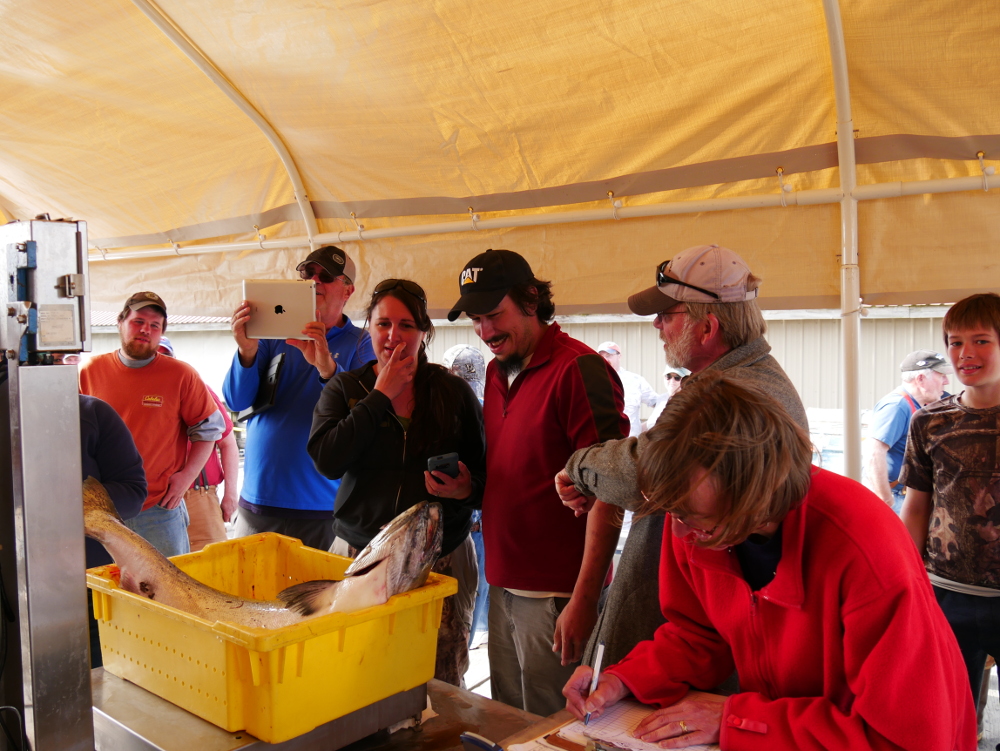 Karrie Byrer, center, weighed in her 2017 Petersburg salmon derby winner just before the end of the four-day competition. The 2018 event was cancelled and fishing closures likely mean the same fate for the 2019 derby. (Joe Viechnicki/KFSK)

King salmon sport fishing this spring will be closed on most of the inside waters of Southeast Alaska for a second year in a row. The Alaska Department of Fish and Game Monday, January 7 announced that keeping chinook salmon would be prohibited starting April 1st in many parts of Southeast.

In the waters of District 8 around Petersburg and Wrangell near the mouth of the Stikine River, the closure lasts through mid-July. Other inside waters in central Southeast are closed to king fishing into mid- June.

The closures are meant to conserve kings returning to the Stikine and other Southeast rivers. Fish and Game is forecasting a return of just over eight thousand (8,250) kings to the Stikine this year, well below the department’s goal for fish returning to spawning waters.

Fishing is also shut down in the Ketchikan area, near Juneau and in Lynn Canal. Similar restrictions were in place last year, leading to the cancellation of Petersburg’s salmon derby, normally held at the end of May. It’s likely that will be the case again this year, although the Petersburg Chamber of Commerce board hasn’t yet discussed the 2019 event. The organization wasn’t able to find volunteers to organize a coho competition later in the season. Other derbies in Wrangell and Juneau switched focus from kings to other species of salmon.

Fish and Game does expect some fishing time in June for hatchery king returns at Blind Slough south of Petersburg, City Creek near Frederick Point as well as Anita Bay near Wrangell. Fishing on those kings could open June 1st.