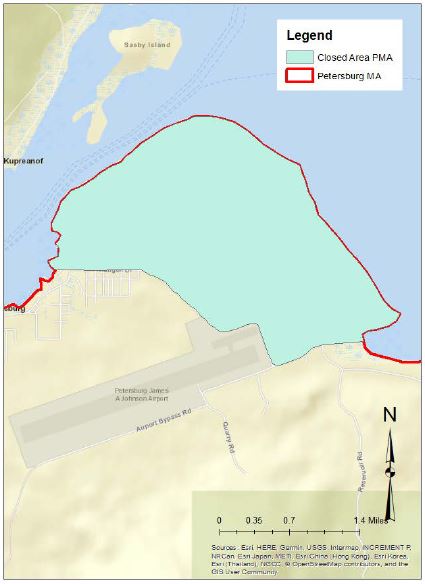 The area in blue will remain closed to archery hunting. Everything else will become part of the Petersburg Management Area with a 100 yard setback from roads and buildings. (Map from the Alaska Department of Fish and Game)

Another hunting regulation change approved by the Board of Game this week will mean an expanded area for archery deer hunting in Petersburg. The board Tuesday OK’d a proposal to shrink the bow hunting buffer from a quarter mile to 100 yards.

In 2002 the board created the Petersburg Management Area, essentially the northern portion of Mitkof Island but south of the airport. The hunting area includes the hillside behind the airport and Ravens Roost and out to Frederick Point. Hunters have to complete an archery class before participating. It was at the request of the local group Devils Thumb Archers. In that hunt, residents and non-residents archers can shoot two bucks a year from October 15 through December 15. But hunters have to be a quarter mile from the airport property, or any dwelling, business or road.

“It would allow some hunters who live near the edge of neighborhoods actually walk from their homes to hunt,” McMahon told the board. “You could do that today but you’d be walking a mile or so. But there’s quite a bit of opportunity roaded to drive, park and hike. But the difference, I think the quarter mile setback distance was probably put in place for safety purposes. But as an archer and a certified archer I feel that 100 yards is more than sufficient for safety since most archers shoot in the 20-30 yard distance.”

McMahon estimated there were around 100 certified archers in the community.

“If you shoot a deer with a bow could a deer, a wounded deer go 100 yards before he tipped over and died?” wondered board member Stosh Hoffman of Bethel.

“Yes he could,” McMahon responded.

“Do you think there’s a potential problem if you end up with a deer, a wounded deer in town, with only a 100 yard barrier?” Hoffman asked.

“Well there’s always potential for problems. If they go 100 yards, sometimes you can put a lethal shot in a deer with an arrow and they can go 100 yards. But most often a lethal shot and it won’t go more than 30 or 40 yards. If you do a bad shot with a rifle it can go miles. Same thing with a bow,” McMahon said.

McMahon thought deer near downtown Petersburg could support more harvest. He cited statistics from the Petersburg Police Department showing around 20-25 deer a year that the department is forced to kill after the animals are struck by vehicles.

Wildlife Trooper Cody Litster raised a safety issue about the proposal before the local advisory committee, noting that the change would allow people to bow hunt around the Hungry Point Trail and ballfields. The local committee recommended leaving that area out of the expanded hunt.

Petersburg’s police chief Jim Kerr told the board his department had no issue with expanding the archery hunt and agreed to keeping the area north of Haugen Drive closed.

“If we closed off that section completely there and if we opened up the rest and just make it 100 yards away from any road or structure that will open up and provide the residents of Petersburg access to the deer which are causing issues,” Kerr said.

The deer herd right near downtown Petersburg is thought to be thriving, with food from homes and gardens along with no predators. The expanded area was proposed to help hunters cull the numbers of the animals on the northern tip of the island. Less than 10 deer are killed in this hunt each year.

Board member Nate Turner of Nenana liked the expanded area. “I see value in people having access to the north side of the air field in between the community but obviously if you get too far into that community area that’s difficult,” Turner said.

The vote was unanimous to reduce the setback to 100 yards and keep closed the area north of Haugen Drive. The board voted to lengthen the season as well. It will now run from October 1st through December 15th, to mirror the new start date for rifle deer hunting on Mitkof Island and the Lindenberg Peninsula of Kupreanof.

One interesting side note: existing state regulations also allow hunting of small game using a falcon in this Petersburg Management Area. That language remains in with the latest change.