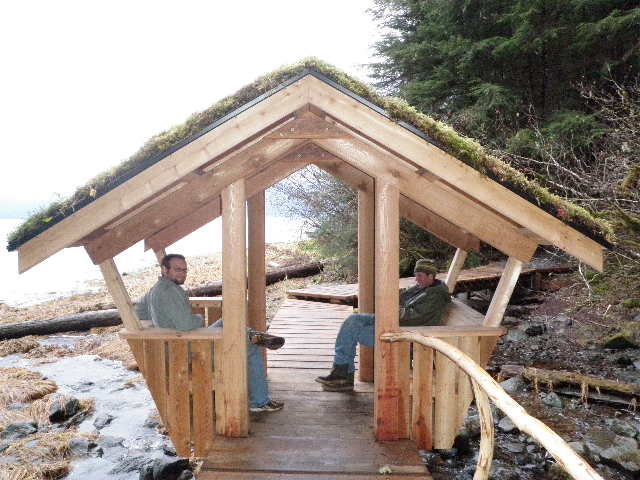 Petersburg’s borough assembly Tuesday discussed safety concerns with the iconic “troll bridge” at Sandy Beach Park in Petersburg. A local resident is asking for improvement to the walking bridge to keep someone from falling off and getting hurt.

The bridge crosses a small creek at Sandy Beach Park at the start of a borough trail to City Creek. Local resident Ryn Schneider asked the assembly to consider changes for safety reasons.

“I see the troll bridge as a safety hazard and liability issue due to the bridge’s deck which is four feet above the creek, the intermittent slippery wood decking and the lack of handrails,” Schneider said. “While it may be unlikely or infrequent that someone will fall off the troll bridge, the consequences of someone falling off this bridge could be severe injury.” Schneider asked the assembly to set up a process to review her safety concerns and work with community members to come up with improvements to the bridge’s structure to make it safer.

The bridge and its small red cedar gazebo with moss-covered roof were designed by local builder Dieter Klose and was finished in 2009. It uses logs cantilevered from either side of the creek to span the waterway. The two sides of the bridge are not connected and could make it more difficult for a traditional, fixed railing.

In a 2009 interview with KFSK, Klose said he wanted to make the bridge feel like a glorified log crossing.

“I always enjoy that when you’re in the back country and you want to get across a creek and there’s a log and it’s a little bit, maybe a little bit spooky,” Klose said in that interview. “The log bounces a bit and I thought well this would be good, just a glorified log crossing. I wanted it to bounce to give people a feeling of a little bit of adventure crossing. And the cantilevers were just basically to give it a bounce, a spring to make it feel like you’re crossing a log, a natural log.”

The bridge connects to a trail that’s been upgraded by local Eagle Scouts. Portions of it have also been reconstructed and improved by the Petersburg Indian Association. That includes a new trail access that bypasses the troll bridge and trail section into the park.

Assembly member Kurt Wohlhueter thought the troll bridge could be a liability for the borough. “There’s been some suggestions that if we deem this as kind of a liability then maybe we need to close it temporarily until we figure out some sort of way of making it safer,” Wohlhueter said. “I mean I understand what the intent was when they originally did it but you know with this litigious society nowadays anybody could slip and fall off on that and then we’re held liable for it.”

One option for the concerns could be to seek a risk assessment from the borough’s insurance company. Borough manager Steve Giesbrecht expected their answer would be that the span could be safer.

“We’ve avoided going that route because it’s an incredible popular Petersburg attraction,” Giesbrecht told the assembly. “It’s been there for at least a while. And for every time we start to talk about dismantling it or fixing it people get very upset at us.”

Assembly members weren’t interested in having an insurance company risk assessor come to town for an opinion.

“I mean we’ve had this discussion,” mayor Mark Jensen said. “It was about something to do with the harbors and you know we could build a bubble over the whole town to protect ourselves. Like I said, first I was on that trail was last week and it was, I’ll go back. It was pretty enjoyable. It’d be a shame to see it closed down because of safety, you could fall down walking out in the woods.”

“It’s a tough issue,” responded Giesbrecht. “I totally get what everyone’s talking about here. We built a bypass purposely so that people who didn’t want to walk on the bridge could go around it. You know the one thing we haven’t done which I think we are negligent on, which is we probably should put signs up in some fashion and just say, hey here’s the alternate route, you know and something that says, hey, cross at your own risk type thing.”

Parks and Recreation director Chandra Thornburg said she, Schneider and a local friends of Parks and Recreation group have been talking about the issue over the last six months. She said Klose was willing to help update the bridge. The assembly agreed signs would be an easy fix and may direct the borough to take other steps depending on input from Klose.