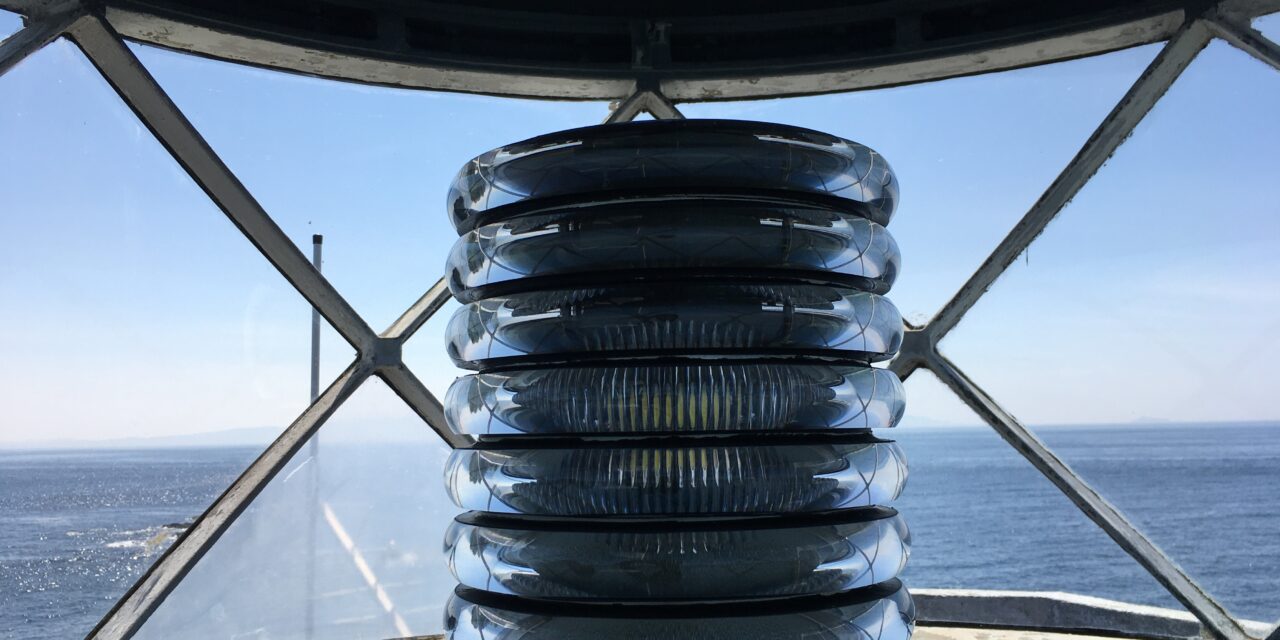 Out in the middle of Frederick Sound, where it intersects with Stephens Passage, is a tiny island. It’s thin and jagged and shaped a bit like a ship. It holds the first manned lighthouse in Alaska, Five Finger Lighthouse. The light itself is automated these days but the buildings are kept up by volunteers. One couple, Pat and John Gans, is spending six months living at the remote spot this year. And one of their duties is welcoming visitors and sharing some of the charm and history. Pat Gans took KFSK’s Katherine Monahan on a recent tour.

Pat Gans explained, “Five Finger Lighthouse was built in 1902, originally, and we were put here because this can be a treacherous waterway. And there was a gold rush in the Klondike. And many, many boats were coming up through Alaska to get to that gold and everyone was in a hurry. And there were a lot of fatalities in this area, so Congress decided to put in these two lights.

And at times, actually, the conditions out here get so rigorous that in the log book, the lighthouse team talks about the lighthouse being capped in ice, and that they could neither get in or out. So it could get tough for them. And there’s stories about the guys from the lighthouse rowing out to passing ships and begging for food.

And then unfortunately, in 1933, it burned down. The guys here, their water pipes had frozen up, and they had taken a torch to try to thaw out the water pipes. And so the wood behind the water pipes caught fire, and then the pipes were frozen still, so they didn’t have any water to put it out. And the entire structure burned down sadly. And then in 1935, the this new cement lighthouse was finished.

The light almost looks like coils, eight coils stacked on each other, clear plexiglass. And it’s only about maybe a foot and a half tall and a foot in diameter. It’s light sensitive, so it comes on on its own at night when it gets dark enough, flashes every 10 seconds, and can be seen for 18 miles.

In the cupola, you can get a sense of why it’s named Five Finger Islands. If you hold your right hand up, we are kind of like the thumb. And then there’s four unnamed islands out there. Those are the four fingers.

So this was such a treacherous stretch of water because the tide would go up and down and it would hide the obstacles. And the old sailors, the story was that in this area, there was a hand that came up from the depths, a giant hand, and would grab ships and pull them asunder. So Five Finger Islands was you know, it was a scary name. A place to respect.”

The lighthouse is now owned and maintained by the Five Finger Lighthouse Society. The non-profit relies on volunteers like Pat Gans to help preserve the historic structure.