Petersburg’s Second Street is getting new water and sewer lines this spring and the work will mean road closures for three to four weeks. It’s part of a million dollar project with S&S General Contractors of Sitka replacing aging utility lines in several neighborhoods around town. Workers put in new water and sewer lines on Noseum Street last fall. After replacing pipes on Second Street from between Gjoa and Dolphin streets, crews will do similar work on Odin Street and Gaufin Street later this spring. 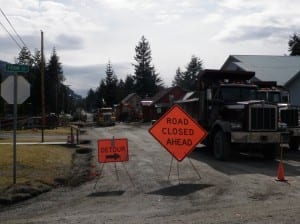 This latest work on Second Street will get the city closer to having a paved street for ambulance access at the Petersburg Medical Center. Joe Viechnicki spoke with the city’s public works director Karl Hagerman about the project.