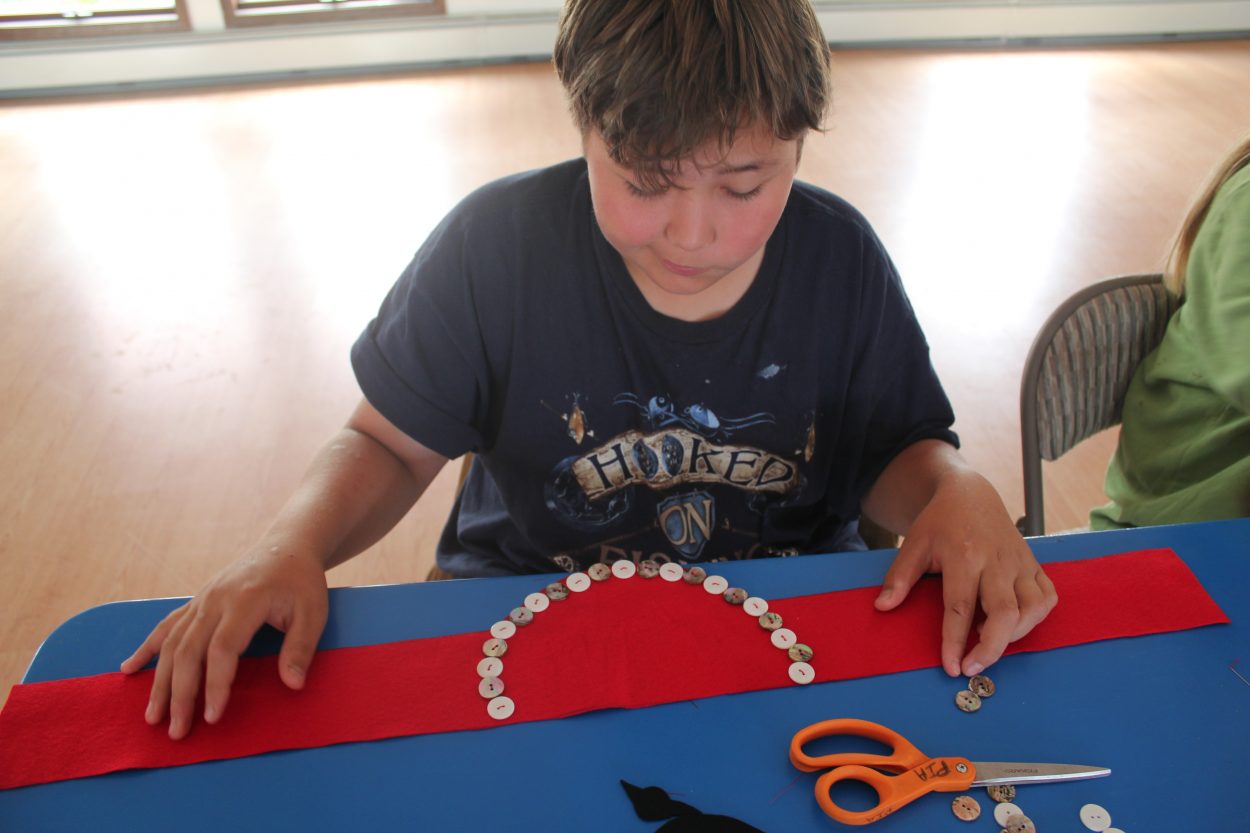 Nearly two dozen youngsters in Petersburg have spent some of their summer months learning regalia making, paddle carving and form-line drawing, along with language and customs of Tlingit culture. The Petersburg Indian Association’s summer culture camp, which wrapped up last week, is not just arts and crafts. As Robbie Feinberg reports, the camp is helping to connect children with the tribe’s history. 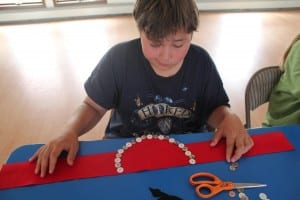 Sarah Cheney is holding a large, red headband made out of felt, helping out a child as he sews a black Tlingit eagle pattern on to its center.

“They’re getting better and better! The more they sew, the better they get,” she says.

Around them, two other children are doing the same thing, each concentrating silently, sewing flowers, bear paws and eagles on to different types of traditional Tlingit regalia. The process takes a long time, and it’s obviously new and unusual for most of the children.

Heather Berkley is one of those students. She shows off an apron she’s created with a black felt bear paw on it and buttons forming flower-like patterns. Berkley’s father is Tlingit, so she’s learned a few of these sewing techniques before. But she’s learning new techniques, too, and what she’s really excited about is showing her father a headband she just created.

“My headband, I put a flower on it because I like the colors on it and the beads that I used are abalone and coral,” Berkley says.

Over the past six weeks, twenty-one students like Berkley have learned how to create traditional products like this as part of the Johnson O’Malley Culture Camp, put on by the Petersburg Indian Association. It’s estimated that the camp has been held yearly in Petersburg since at least the 1970’s. For this year, each week has brought a different activity. There’s been paddle-making, drumming, a fish camp over at Sandy Beach, and learning native form-line drawing.

Thomas Gallant is the director for the camp. The way that he and the other staff have approached teaching the children here is to not overwhelm them with new information. Instead, he says they’ve picked a different topic each week and gradually exposed the campers to ancient customs.

Gallant shows an example of that by pointing at a white piece of paper across the room. It’s right underneath a clock on the wall, and it reads “Gaaw. G-a-a-w.”

“As you can see, around the room we have signs up of different things of what the tables were in Tlingit and clocks were and other stuff around the room,” he says. “So it was small stuff like that that we thought would be a nice root for the kids to start to learn their culture.”

By learning that language and culture slowly, Gallant says, the children here can pick up pieces of history and tradition easier. Gallant says that’s vital in a place where that tradition has been slowly dying out.

“It’s very important,” he says. “It’s kind of a tight grasp, cause we’re losing our elders, who were able to teach us. So we want to just be able to grab on as tight as we can and make sure we can push our culture into the future with the next generation to follow.”

Brenda Louise helps to oversee the camp as the grants manager for the PIA, and she agrees. The Tlingit people goes back thousands of years, and Louise says she sees pieces of that history all over Petersburg, in both the people and the landscape. And she doesn’t want to see it disappear anytime soon.

“Well, I have nine kids, so having them understand their culture and how being connected to this place – place meaning Southeast Alaska where the Tlingit and Haida tribes are – fits into who they perceive themselves and their sense of place,” Louise says. “We have petroglyphs out in Sandy Beach that date back to the time of Christ. The Tlingit people have been here long before that. That’s a very incredible heritage to be a part of. All of these kids that are here – people call Petersburg Little Norway, but actually it was a fish camp, and people were here long before Peters Buschmann showed up. So it’s really important that our children that are going through the school children have a connection.”

Because of the loss of many of its elders, the Tlingit tribe simply isn’t as tight and connected as it was centuries ago. But through the camp, and the children in it, Louise says the tribe has re-established some of those bonds.

The culture camp wrapped up for the summer last Wednesday, but the tribe is looking to continue teaching Tlingit culture to children during other seasons, too. The ultimate goal would be to add fall and spring culture camps in the future, which would allow the campers to learn even more customs, like subsistence hunting and fishing.