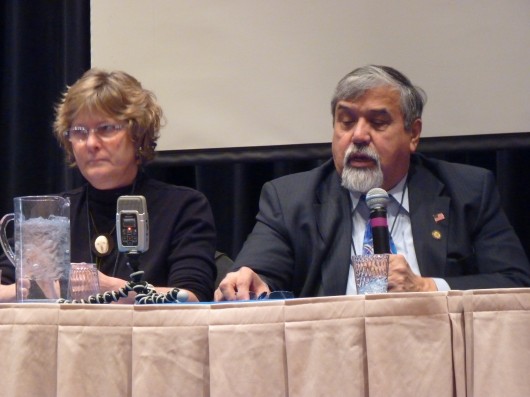 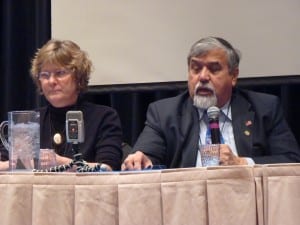 Former Haines Representative Bill Thomas is considering a run for the House seat being vacated by Juneau’s Beth Kerttula. But he’s more likely to take on Juneau Senator Dennis Egan.

Republican Thomas served eight years in the House. He lost a close 2012 race to Sitka Democrat Jonathan Kreiss-Tomkins after new boundaries put that city inside his district.

He hoped for a rematch, but an updated redistricting plan put Haines in with Petersburg, Juneau and a few smaller communities, not Sitka.

Thomas says he’s considering a run for Kerttula’s seat, which has been held by a Democrat for at least two decades. But he probably won’t do it.

“I think it would be an uphill battle, from what I’ve seen through the years, depending on who they put in there,” Thomas says.

District Democrats will nominate up to three replacements, with the governor making the choice. Thomas can’t apply for that, since he’s a Republican — and living outside the current district.

He can run for the seat later this year, when election boundaries change.

He says he’ll decide once he knows whether the new representative is a place-holder, or someone who would run as an incumbent.

“I’d rather right now wait to see what happens this next week or so with the appointment,” Thomas says.

Kerttula has held the seat for 15 years.

She says she hopes Thomas won’t run – because he’d lose.

“Bill Thomas is a friend, so I’m hoping he’ll think twice before he gets himself into this any further. But, the math alone means this will stay a Democratic seat – and a strong one,” Kerttula says.

“I’ll be the first one to admit, my chances of beating Dennis Egan straight up are nil,” Thomas says.

Egan was appointed to the post in 2009 when Senator Kim Elton resigned for an Obama administration job. The Juneau Democrat was unopposed in his 2010 reelection bid.

Thomas points to Egan’s recent hospitalization and wonders whether the Juneau Democrat will be able to complete another four-year term.

“I just want to have a debate with him saying are you going to spend your four years? And if not, will you step down within a year or six months after the election?” Thomas asked.

“There’s no way in heck I would quit serving in another term,” Egan says.

He says he’s fully recovered from what he calls routine heart surgery about three years ago. He also says leg surgery last year was successful.

He says he’s also getting back to full speed after an infection he caught in the hospital attacked his foot.

“I’ve filed a letter of intent and I have money and I plan on running,” Egan says.

Kerttula, who’s been House Minority leader, is leaving for a one-year fellowship at Stanford University’s Center for Ocean Solutions.

She could return and run again for her House seat, or Egan’s. But she’s not making any plans.

“We’ll just see what the future brings. But I can’t really see that far ahead right now. But I know somebody’s going to be in this seat for a long, long time,” Kerttula says.

For the next election, they’ll drop Petersburg and add Haines.

Juneau’s other representative is Republican Cathy Munoz. Her district is – and will be – all within the capital city’s boundaries.