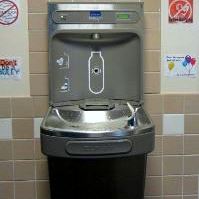 Students’ physical well-being is paramount to how well they perform in school. The Petersburg School District is hoping to improve that through a four-year, $600,000 grant which started this school year. An update on the grant was given to the district’s school board at their last meeting.

So far, the Healthy Living Grant has helped wellness projects in all of the schools. That includes ten modern water fountains being installed that feature a place to fill water bottles.

“The kids are loving it,” Evens says. “You can see them going and filling up their water bottles. The water is much colder, it’s filtered.”

Petersburg is one of nine districts in the state to receive the grant through the Department of Health and Human Services under the Obesity, Prevention and Control Program. Evens says drinking water was one of the main components of the grant.

“We had water. We had accessible water but the kids were not going to all the water fountains because they didn’t like the way it tasted, what it looked when they put it in their water bottles so this is very exciting that this is happening,” Evens says.

The hope is that if students are drinking from their water bottles, they’re not consuming other sugary drinks.

The healthy living grant is also helping to fund breakfasts for high schoolers and fifth graders. For the older students, it’s called the Second Chance Breakfast Program. Before this year, breakfasts were not available for the teenagers. Now, about 35 students a day eat at the school in the morning.

“Kids who have free and reduced lunch can use that for the second chance breakfast or they can purchase it and the kids really seem to be enjoying it,” Evens says.

“It’s amazing, it’s 35 people that are eating something and they’re all complete meals, nutritious meals for the most part and so that’s awesome,” Wells says.

Wells also gave an update to the school board on how the grant is helping. She says it’s funding a new pilot program for the fifth graders through the Healthy, Hunger-Free Kids Act. She says before the program they were feeding 80 meals per week. Now that’s jumped to 150.

“So we’re looking, you know, seeing if that increases our participations, feeds our kids, and how that impacts those students,” Wells says.

The middle school students have had a breakfast program in place that allows them to eat at school if they want but school board member, Sarah Holmgrain, says it’s the high schoolers who might need that meal the most.

“I’m willing to bet a lot of them go out the door not eating breakfasts whereas in middle school, parents still tend to make sure they get a breakfast or they are eating at school so this is great,” Holmgrain says, “I’m really happy to hear that this has been done.”

The healthy living grant also supports the esteem-building Girls on the Run program in the grade school as well as after-school snacks for all students.

Another new health related program the school district is implementing will allow parents to keep tabs on the finer details of the school’s menu. It’s a new computer software program.

She says part of the grant is proving to the state that the district is meeting their nutritional requirements…which, she adds, Petersburg has no problem doing.