Commissioners for the Thomas Bay Power Authority are wondering whether the organization’s president will be coming to any future meetings or if staff will be drafting a spending plan for the upcoming year. TBPA operates a hydro electric power plant that provides electricity for Wrangell, Petersburg and Ketchikan. But the day to day operations may be transferred to a different organization this year.
16TBPAweb
TBPA president James Stough of Wrangell was not at the meeting and his absence was a topic throughout the session. Joe Nelson is a commissioner from Petersburg. “I’m wondering in the absence of our president again, this is the second noticed meeting that he has chosen not to attend, has chosen not to communicate with us and we have no idea what his thoughts are, if he’s participating anymore there’s been no communication whatsoever that I’m aware of. I’m wondering if we need to put that on the agenda to elect a new president,” Nelson said. 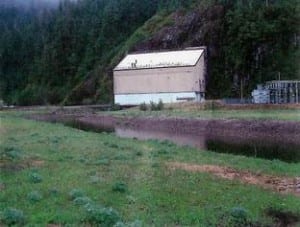 The operations at Tyee may be transferred to the actual owner of that hydro plan, the Southeast Alaska Power Agency. SEAPA is based in Ketchikan and also owns another hydro plant near that community. Some of the same people are appointed to a board that oversees that organization.

The transfer of Tyee still needs to be approved by the communities and SEAPA. But if it does go through, the move will essentially mothball the joint Thomas Bay power authority. Assemblies in both communities voted to negotiate the transfer with some conditions.

Earlier this spring however, Stough, who’s also on the Wrangell assembly, wrote a letter to the communities this spring asking them to cease and desist the negotiations over the transfer. Stough argued that Thomas Bay should be negotiating with SEAPA and not the municipal governments of Wrangell and Petersburg. The authority was created by jointly by Wrangell and Petersburg 40 years ago.

Commissioner from both towns were unsure about whether the Stough planned to continue in his appointed seat. l“Haven’t heard anything formal as to what Mr. Stough’s intentions are,” said Clay Hammer of Wrangell. “Any correspondence, very little feedback if any out of the Thomas Bay office in response to different letters I have wrote there. So I don’t really know what’s going on there. I just know for a fact though we cannot as a commission continue to be taken seriously if we continue to conduct our business in this matter. And so something’s got to give there.”

Meanwhile, the commission also had no administrative or office staff attending the meeting. John Jensen of Petersburg also wondered about that. “I myself think we probably should see if anybody’s even out in the office. We’re not getting any responses, we’re not getting our manager’s report, were not getting our financials. We’re not hearing anything from them. Is anybody even there? I mean somebody should go out and check the door and see if we’re open for business.”

Another commissioner from Wrangell, Dave Galla resigned this year. Five of the seven commissioners attended the meeting held in Petersburg, with Brian Ashton attending by phone. Vice president Robert Larson led the session. He told the commissioners he wanted to have an election of officers at their next meeting. The group voted to send a letter to James Stough to find out if he intended to resign. They also decided to direct their manager to draft a budget for them to consider at their next meeting.