Ferry system plans for a new route in Southeast 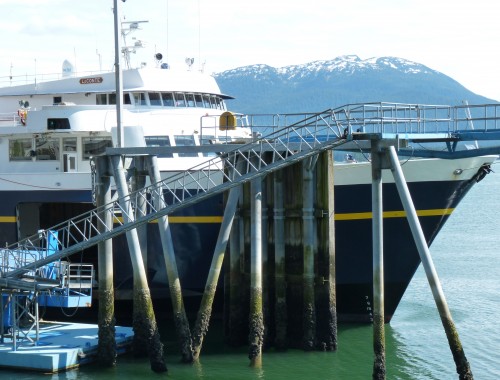 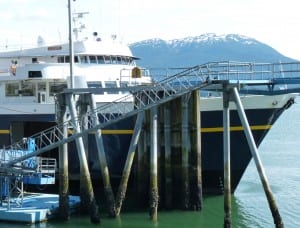 The state ferry system is planning a new route in Southeast Alaska. It’s being done in conjunction with a new, privately run ferry.

The ferry docks were built last decade for routes that no longer exist.

One sent a fast state ferry between Ketchikan and South Mitkof, about 25 road miles from Petersburg. The other was an Inter-Island Ferry Authority route connecting Coffman Cove, Wrangell and South Mitkof.

More than $15 million in federal transportation funds paid for construction. But officials say the money needs to be paid back unless the terminals are used.

Falvey says that’s a reason for the new route. “We want to take a look at it and give it an honest try,” Falvey says.

He says the small ferry LeConte will make a monthly trip on the route. As a result, Hoonah will lose one monthly sailing from Juneau.

“It’s necessary to show that the terminals built with federal money are being used for their intended purpose,” Falvey says.

Kent Miller is manager of the North End Ferry Authority. That’s the group preparing a used, 65-foot landing craft to sail along a similar route.

The authority expects what it’s calling the Rainforest Islander to dock at other landings at the start. But it hopes to adapt the Mitkof and Coffman terminals for its use. And that requires them to remain in state hands. Miller says the authority intends to start service in spring of 2015, around April 15th, and continue the service year-round.

The Coffman Cove-based ferry will sail to Wrangell and the South Mitkof terminal four days a week. A shuttle van will bring passers to and from Craig, Prince of Wales’ largest city. It will also take riders the 25 miles from South Mitkof to and from Petersburg.

“Our service will have to pay for itself out of the fare box,” Miller says. “And our financial analysis says that it can do that.”

Miller and the state ferry system are working together to avoid conflicts. Both support each other’s plans.

The state’s route is part of a proposed summer 2015 schedule just released for public comment. A teleconference is scheduled for Sept. 25 at 10:00 a.m. for Southeast and 1:30 p.m. for Southwest and Southcentral.

That schedule includes a few other changes. The fast ferry Fairweather will begin spring service May 15th, about two weeks later than usual. It links Juneau, Angoon and Sitka.

Also, the Tustumena will begin its far-Southwest sailings a little later this year, due to repairs to its drive system.

“We’re looking at May 5th. If we get the shafts repaired quicker, we’ll go ahead and run that earlier chain run if we can,” Falvey says.

The Tustumena will also call at Old Harbor, on Kodiak Island, six times next summer, up from four.

Falvey says he knows other communities want more state service. But the money isn’t there.

“We’re working hard to find efficiencies,” Falvey says. “And I’m finding efficiencies here and there. … We’re maintaining the same service and doing it with a hold-the-line budget right now.”

The proposed schedule covers May through September of next year.

The Sept. 25 teleconference will begin at 10 a.m. for Southeast schedules and 1:30 p.m. for Southwest and Southcentral schedules.