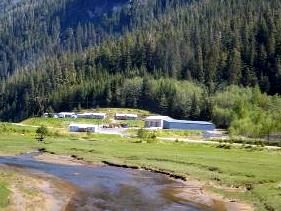 The Tyee Lake Power Plant used to be managed by the Thomas Bay Power Commission. The authority is considering its ongoing role, since the Southeast Alaska Power Agency took over management. (Courtesy TBPC)

The Thomas Bay Power Commission Tuesday resolved to ask the borough assemblies of Wrangell and Petersburg how it can contribute to the communities, after a management transfer removed its original responsibilities.

The two assemblies created the commission to oversee the Tyee Lake power plant, which provides electricity for Wrangell, Petersburg and Ketchikan. The plant is owned by the Southeast Alaska Power Agency. SEAPA took over operation and management of the hydroelectric facility last month.

That left the Thomas Bay Power Commission without a clear purpose.

“I think we’re gonna go ahead and put together a letter basically so that we’re responding with a unified voice as to what direction it is our assemblies would have us go,” Hammer says.

“I guess what we can speak publicly to is at this point there were some things that have come to light since we basically closed up shop in the office there, and we’ve decided to go ahead and pass some of the financials back to SEAPA and just kind of review and see if anything jumps out as being not quite up to snuff there,” Hammer says.

The commission discussed the recent SEAPA meeting at which the board voted to pay this year’s annual rebates to member communities. Wrangell and Petersburg will each receive around $200,000. This is likely the final year for full rebates as SEAPA attempts to fund an expansion of the Swan Lake dam.