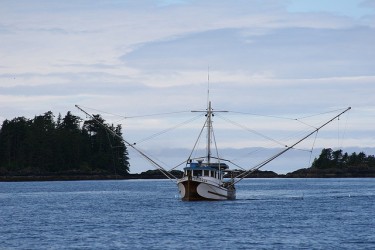 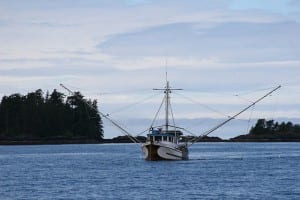 A troller fishes near Sitka. The troll season has been extended 10 days through the end of September. (Supafly/Flickr Creative Commons)

The Southeast Alaska summer troll fishery is being extended by 10 days. That allows continued fishing through the end of this month.

The Alaska Department of Fish and Game’s Pattie Skannes says all species of salmon except Chinooks can be harvested. But the fishery is mostly about cohos.

“What normally happens in the season closes by regulation on Sept. 20th, unless we do an assessment of the coho run and determine that it’s strong enough to warrant extending,” she says. “So this year, that was the case. It’s been shaping up to be a very strong return.”

Skannes says the projected total is 15 percent higher than the past 30 years’ average.

But the extended season doesn’t necessarily mean more fish will be caught.

“The effort is relatively low during September. On the average, less than 1 percent of the troll coho harvest has been taken during those 10-day extension periods,” she says.

The new data means the allowable wild commercial catch is set at 2.3 million, up from earlier projections.

The coho troll season has been extended 13 times since 1994, including this year.

The extension has exceptions. Skannes says some Southeast fishing grounds have already been closed to protect Chinooks.

“There are five areas of high king salmon abundance that are closed: The Fairweather grounds, an area just north of Cape Spencer, waters off Yakobi Island and Kruzof Island, and waters just south of Whale Bay,” she says.

The winter troll fishery opens Oct. 11th. Its management plan will be released early next month.