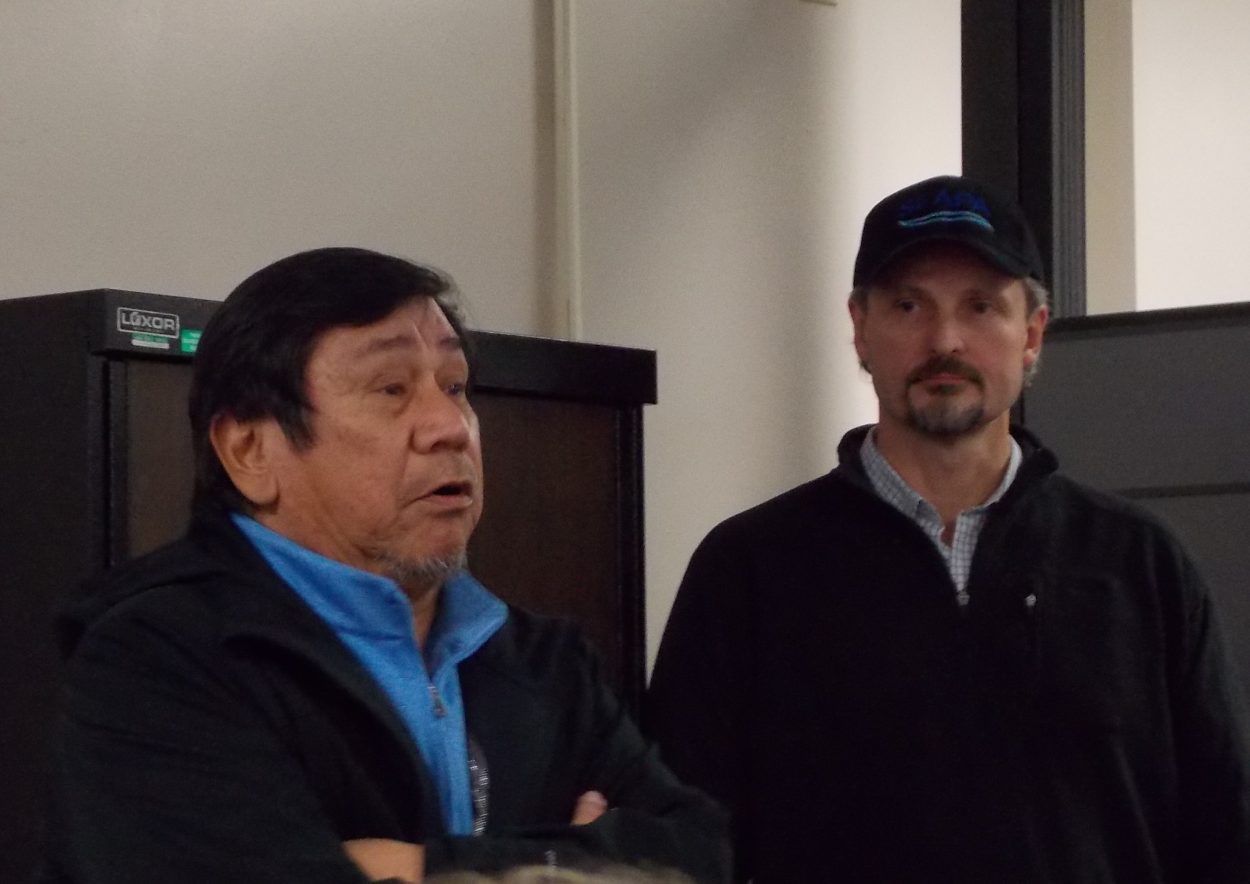 A multi-million dollar electrical power line extension to connect Petersburg and Kake is a little closer to becoming reality this year. The U.S. Forest Service has released a draft Enviromental Impact Statement examining three possible routes for the connection, which could bring cheaper electricity to Kake. That town’s mayor made an impassioned plea for support of the project during a meeting Wednesday in Petersburg.

The Kake Petersburg Intertie as it’s called, has been under study for decades but the environmental review of the project underway has supporters thinking it’s a little closer to construction.

“This is a huge milestone for this project. I think it’s been conceptualized for decades essentially,” said Trey Acteson, CEO of the Southeast Alaska Power Agency, the Ketchikan based owner of transmission lines and two hydro-electric projects near Wrangell and Ketchikan. SEAPA would own and maintain a new transmission line to Kake, if it pencils out and if SEAPA could land grant money for the tens of millions of dollars needed to put up poles and string the line across Kupreanof Island.

Acteson acknowledged concern over any possibility of the state providing money given low oil revenues. “I’d just enourage people to take the long term perspective when they look at this. It’s been going on for decades and over those decades oil prices have gone up and down, and up and down. The fiscal cycle in the state of Alaska will modulate over time. What this project will allow us to do is get it queued up, get it through the permitting process and then essentially having it shovel ready for when the opportunity for funding comes along.” He thought the revenues from a proposal natural gas line could one day fund projects in Southeast like this intertie.

As the raven flies, its only about 40 miles of Kupreanof Island, and mostly Tongass National Forest land, separating Petersburg and Kake. The routes under consideration make that a little longer, between 50 and 57 miles. But there’s a big separation in the cost of electricity in the two places.
The Inside Passage Electric Cooperative is a Juneau-based non-profit electric utility that sells diesel generated power to Kake and other small southeast villages.

IPEC’s general manager Jodi Mitchell attended the meeting and noted people still have Christmas lights on in Petersburg. “If you go into Kake you’ll see they don’t have Christmas lights. Often times most of the residences are dark because they can only afford to have one light on there, in their house. In order to keep under that 500 kilowatt hour level. So it’s a quality of life issue as well as a financial issue.”

Whether there’s hydro power available on the current grid depends on the weather. A warm wet year like this one means SEAPA would have had electricity to sell – a dry cold winter and Ketchikan is forced to run diesel generators to make up for lack of that water. SEAPA and others are looking into expanding capacity or adding other power sources for the future.

There’s also the question of how to get the powerline across Kupreanof Island and that’s where the project meets some resistance. Joe Sebastian of Kupreanof, a small city of a couple dozen people across the Wrangell Narrows from Petersburg. “We are for Kake getting this power. I think it’s extremely important and long overdue, but we’re also saddled with this other tire, spare tire, that we have to deal with.” That “other tire” is a potential road and ferry connection under study by the state of Alaska and federal highway administration. That project’s opposed by Kupreanof and could mean a new ferry terminal or road right near the otherwise roadless community.

IPEC Jodi Mitchell said it made sense to follow a federally identified road corridor on the northern side of the island. “We’re trying to do what the future is going to bear out,” Mitchell said. “It does not make sense to go in an put in an intertie that’s gonna require 83 helipads, 83!”

Those helipads would be used for line maintenance and repair along the unroaded portion of the northern route. Of the three options under consideration, two would follow the northern route, cross the Wrangell Narrows in Petersburg and head across the north side of Kupreanof Island.

Another possibility would cross the Wrangell Narrows about 10 miles south of Petersburg and then head across the center of Kupreanof Island, with a second water crossing in Duncan Canal. One of the northern route alternatives is the proposed action, selected by a steering committee made up of officials from Kake, Petersburg and the power utilities. All three would make use of existing forest roads across most of Kupreanof Island.

Officials at the meeting repeatedly made the point that the powerline was a separate project from a state of Alaska and Federal Highway Administration study of a possible road and ferry link. However, project supporters acknowledged the route along the northern end of Kupreanof would be chosen with that road connection in mind.

Dave Beebe asked about the rationale for selecting the northern route as the proposed alternative. “Seeing how the central southern route has the least environmental impacts and, by appearances, probably the least cost, how is it that the steering committee can then sort of impose a rationale that’s really not based on environmental consequences or cost?” he asked.

SEAPA’s Trey Acteson responded the road possibility could not be ignored. “There is a possibility that there will be a road there at some point in time. And that potentially would make O&M (operations and maintenance) costs cheaper on the line And O&M costs are a concern.”

Operations and maintenance costs are things like clearing downed trees from the powerline corridor and repairing the line and poles. Those costs would have to be paid by customers in Kake and will factor into the end price of power from a transmission line.

SEAPA commissioned a report completed last November and that study looks at economics and cost of construction. The cheapest to construct is the center-south route, as it’s called, at nearly 57 million dollars. The two northern routes are estimated at 60 and 65 million dollars.

Kake mayor Henrich Kadake made an impassioned plea for support. “I served for 15 years as mayor of Kake and we’re so close to permitting this intertie. We’re so close. And I’m not going to drop it again. Because I seen it dropped four times in my lifetime already. We spent over a million dollars every time, to try and get it to this point. And we’re just a few months away from getting this thing permitted. And when we get it permitted who knows when we’re ever gonna find money to build it. But we’ll be ready, we’ll be shovel ready.”

Petersburg mayor Mark Jensen thanked Kadake for coming to Petersburg and appreciated his words on behalf of that community. “I think they need some kind of a substantial power source. I’m totally in support for a powerline to Kake regardless of what route it ends up going. I think it’s very important that we support this.”

The Forest Service’s draft EIS says the center south route would have the least impact of the three alternatives on old growth forest, roadless areas and deer habitat. That route would also have more of the powerline along already existing forest roads and would require fewer helicopter pads.
The environmental review will determine which of the three route options, if any, should be permitted by the Forest Service. That decision will be up to the regional forester. The Forest service is taking comments on its draft EIS through February 11th.