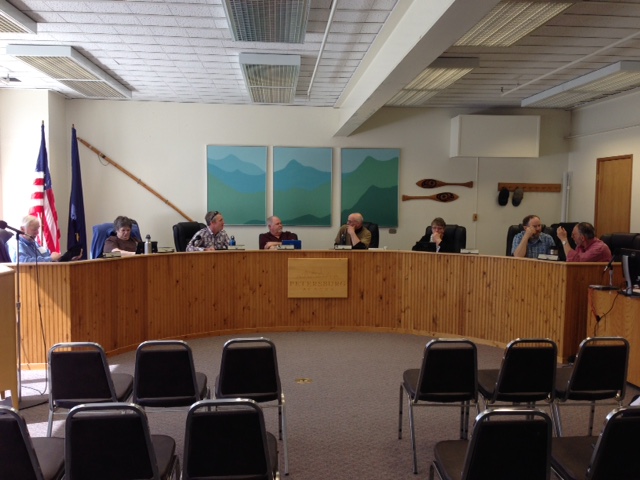 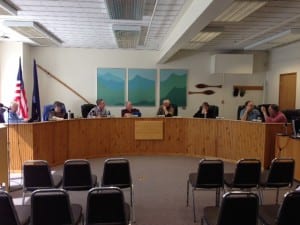 The Petersburg Borough Assembly prepares to gavel in for a regular meeting. Photo/Angela Denning

The Petersburg Borough Assembly met at noon Monday and breezed through their agenda within an hour, taking action on several items.

Assembly members passed a resolution that pursues a cart-based system for curbside recycling.

The vote came after the initiative asking the Petersburg Borough to continue the blue bag recycling program as is was withdrawn by its sponsors.

“It looks like we’ll just be moving forward with the blue cart program for people who are interested in participating,” said Mayor Mark Jensen.

The motion to go ahead with a cart-based system passed unanimously.

Assembly members authorized the purchase of 20 portable radios for the police department for about $60,000. Police Chief Kelly Swihart told the assembly they will provide better coverage in the core area.

“These portable radios will be for the police officers and fire department command staff,” Swihart says. “The smaller portables that we have now we still may be able to use those internally for a time or we may need to surplus them out. We just haven’t made that decision yet.”

The authorization to purchase the radios passed unanimously.

A resolution setting millage rates for fiscal year 2015 to 2016 passed 6-1 with John Havrilek as the only dissenting vote. Service Area 1 would see an increase in property tax millage of .04 over last year. It equals an increase of $4 per $100,000 of assessed property value.

The borough assembly also listened to a presentation on a proposed remodel of the electric building. Architect, Linda Millard, detailed three possible options and the assembly supported the most expensive option for several reasons. The assembly vote gives the architect firm the go ahead to move forward with the design plan up to 95 percent.

KFSK news will have more on the details of the proposed remodel of the electric building in future stories.