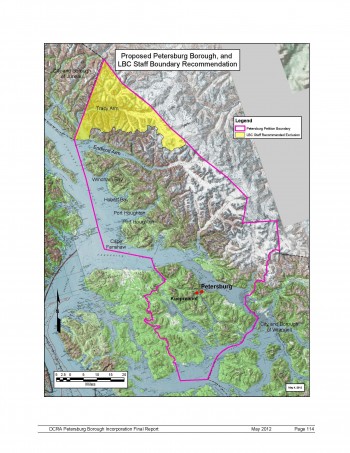 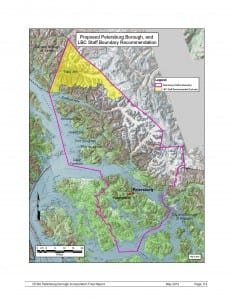 The Alaska Supreme Court is scheduled to hear a local boundary case Wednesday morning that could redraw lines around a chunk of Southeast Alaska the size of Delaware.

You can watch the arguments in this Alaska Supreme Court case live at 10:30 a.m. Wednesday on 360north.org.

The contested land is almost completely uninhabited national forest – Juneau “estimated” the population at one – but with the land goes federal receipts, some property and sales tax revenue, and local authority.

The case pits Juneau against Petersburg and stems from Petersburg’s dissolution as a city and reincorporation as a geographically much bigger borough in 2013. Its northern border now comes to Holkham Bay, where Tracy and Endicott arms empty into Stephens Passage.

The usual authority on these matters, the state’s Local Boundary Commission, cut about 500 square miles of land around Tracy Arm from Petersburg’s original annexation request. It was a concession to Juneau, where tourism connections made it a better fit, commissioners said.

But Juneau wants another 1,500 square miles more excluded from the Petersburg Borough and argues it has better claims to those lands and waterways that weren’t properly considered by the commission.

Juneau appealed the commission’s decision and lost in Superior Court in 2012. Now Juneau’s appealing again in the Alaska Supreme Court.

Juneau argues the Local Boundary Commission didn’t fulfill constitutional obligations during its deliberations by “artificially limiting” what Juneau could submit during the commission’s decision-making process.

Petersburg argues that the commission did properly weigh the competing claims — its fisherman are responsible for more than 90 percent of commercial haul from the contested area — and acted within its authority.

If Juneau prevails, Petersburg may be forced to revert to city status.