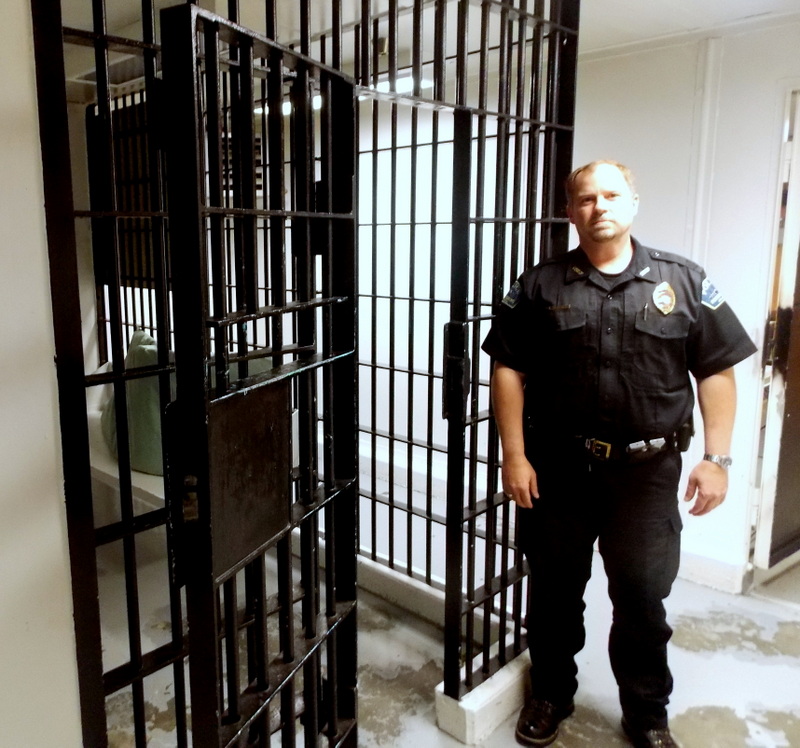 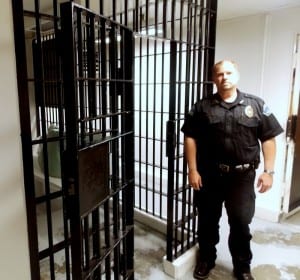 Kelly Swihart, Petersburg’s Chief of Police, stands in front of one of the cells in the community jail. (Joe Sykes)

Budget cuts to state troopers are taking place all over Alaska. But in small Southeast communities, like Petersburg, it’s a double whammy. That’s because community jails are also taking a hit. And the two are inextricably linked. Joe Sykes explains.

When you think of doing time, most people imagine something on a grand scale like out of the film The Shawshank Redemption. But the Community jails in Southeast are a little different from that.

Kelly Swihart is Petersburg’s Chief of Police. He shows me a cell block made up of two rooms lodged at the back of the Petersburg police station.

He takes me into one of the cells.

“We have two steel bunks with some mattresses here and over in the corner is a combination unit of a sink and a toilet. It’s pretty sparse,” he says.

The maximum stay here is 15 days at the moment. After that an inmate will be transferred to a larger facility in Juneau or Ketchikan. The state troopers are responsible for the transportation of people from community jails. But there are no Law Enforcement troopers in Petersburg and Swihart thinks the swingeing cuts to the state troopers program will make it difficult for them to move prisoners in good time.

“The chain of command at the DOC and the department of public safety need to connect,” he said. “Right now we are only supposed to hold people for 15 days based on our facility set up so they’ve only got a couple of weeks to get em out.”

And he says what makes it extra hard is the Department of Corrections has slashed the budget for community jails. In Petersburg, state funding fell from 320,000 dollars to $185,000. He’s put in a proposal which would limit the length of stay in Petersburg’s jail to 9 days. That would make it even harder for the state troopers to get there on time.

“Cuts to community jails has been a great concern to Alaska state troopers,” said Colonel James Cockrell, the Director of Alaska State Troopers. He says he’s already seeing a backlash from police departments in small communities as the troopers do not have the budget anymore to act as effectively in moving prisoners.

And much of the issue here is about maintaining relationships. The Department of Corrections controls the budget for the jails while the Department of Public Safety deals with the State troopers. Alaska State Troopers are being told to cut a further 2.6 million dollars this year. With both agencies making severe cuts Cockrell says they will have to start to prioritize services.

This is something that really concerns Kelly Swihart but he thinks whatever happens the community jails need to stay open.

“The state needs to have a jail here. We need to have that type of facility here in Petersburg,” he said. “Without that facility we would have a negative impact on our quality of life and it would negatively impact our public safety.”

For the time being the jail here is safe. But Swihart says it might not be long before further cuts spell closing time for community jails across the state.