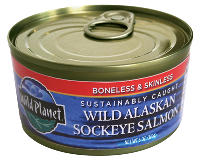 The federal government has agreed to buy up to $30 million worth of canned Alaska sockeye salmon. The announcement was made this week by the US Department of Agriculture Secretary, Tom Vilsack.


Last year’s sockeye salmon harvest was a good one. It was the second highest in the past 10 years, totally more than 35 million fish. Some of those red salmon ended up being canned and many of those cans have yet to sell. At least, until now.

Senator Lisa Murkowski wrote a letter to the USDA requesting a purchase of the salmon through the Emergency Food Assistance Program.

“I don’t know how else to say it other than it’s a win-win,” she said. “You know you’ve got folks on both sides that are able to benefit from it. We’re seeing fishing industries that can see those dollars and stay in business and food banks are able to fill their shelves and serve needy and struggling families in Alaska and across the nation.”

The fish will be distributed to food banks in all 50 states.

Alaska’s Food Bank serves families all over the state through 300 partner agencies. Last year, the non-profit gave out 6.8 million pounds of food to needy families. Canned sockeye salmon will be a welcomed addition to the shelves says Michael Miller, Executive Director of Alaska’s program.

“Protein is sometimes a really difficult commodity to get as a food bank even here in Alaska and Lower 48 has the same problems that we do with that,” Miller said. “So, I think that all of the food banks across the country are really going to benefit from having this salmon in their inventory.”

One of the challenges with protein is the shelf life. Miller says often times they get frozen meats as donations and while it’s also welcomed, it takes more work.

“That takes a lot more handling and sometimes people who are hungry don’t really have the same access to refrigeration and freeze as other people,” Miller said. “So the canned protein, like this is very portable and very shelf stable product that anybody can have access to.”

The $30 million to buy the surplus red salmon is coming from existing funds through the Emergency Food Assistance Program. The program has made similar purchases in recent years. Last year, $13 million worth of canned pink salmon was bought and in 2013, $30 million in canned pinks was purchased.

The food program has been around since 1983.

When you file for your PFD by March 31 deadline, you can support a Petersburg nonprofit when filing too - learn more, by clicking the image

Getting to know some of those that worked in Petersburg Canneries