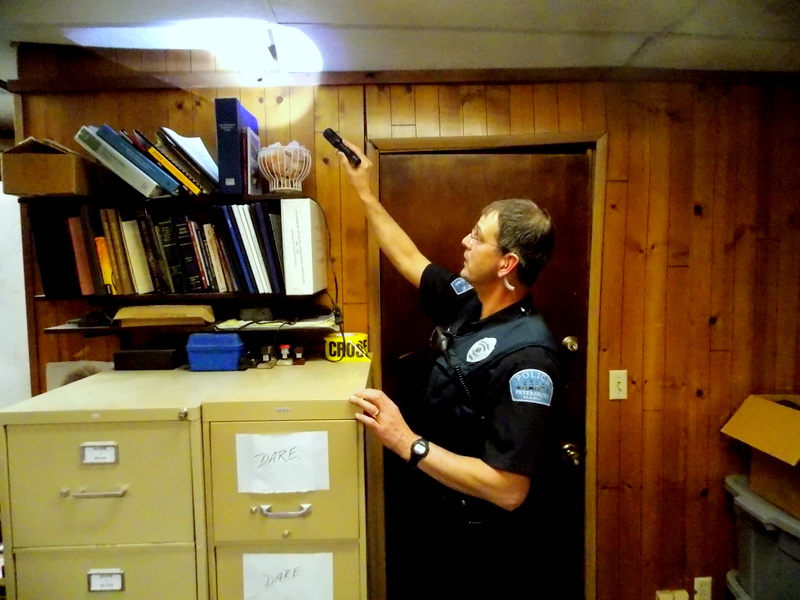 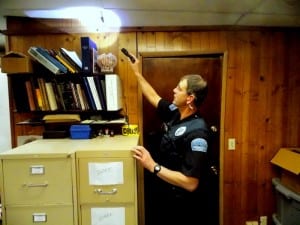 Police Officer, Derk Thorsen, takes a close look at the buckling ceiling in the squad room of the municipal building.(Joe Sykes)

People in Petersburg have been talking about renovations to the municipal building for the past 30 years. Now it finally seems to be coming to fruition. Joe Sykes reports.

The municipal building in Petersburg was built in 1958 and looks every bit its age. The outside is greying and discoloured and the inside is even worse.

Chief of Police, Kelly Swihart, gave me a tour around. He took me into the squad room:

“You can really see the structural issues in the ceiling here. This door frame is coming off and this wall’s buckling,” he said.

The door no longer fits into its frame and it looks as if any minute now the ceiling might cave.

Kelly Swihart says the renovation has been too long in the making.

“It’s time. My guys deserve a safe professional environment to work in because they do an awful lot for the community,” he said.

Now, after many years of back and forth it seems as if the renovation now only has to clear only one final hurdle. There is about 3.4 million dollars that remains unfunded but Swihart is confident they can make up that shortfall and has a plan in place.

“It’s certainly a challenge but the manager and the finance director have come up with a plan to borrow money from existing reserves to make up that shortage and we can do that without increasing any tax rates or going out to bond,” he told me.

The problem for Swihart is at a time of tight fiscal circumstances it’s tough to take a project like this that final step.

But according to Corey Rowley, a police officer sitting in on the public safety meeting last week, getting this thing up and running is essential. That’s because it’s not just the floors and the doors that are dangerous. The community jail as it is right now is so cramped officers fear for their safety.

“If you have somebody in there that has an issue” he said. “It’s a pretty unsafe place to be doing business back there.”

And looking at the plans he’s encouraged by the space the new building will give staff.

“Compared to what we have right now it allows for a bit more safety for the officers,” he said.

Community jails are an area where state funding has been slashed and committee member Sally Dwyer wanted to know whether they could keep the same number of beds.

But Swihart explained that while they are thinking about cutting the number of beds in the jail because of a lack of money, the building plan allows for a scenario where the funding is reinstated.

“We took a pretty good hit and we’re still working with the Department of Corrections to come up with a plan but we thought it was important to stick with a plan in case that funding comes back,” he said.

“I’m hopeful that we can go out to bid this fall and we start demolition later in the fall or early winter,” he said.

He hopes the plan to raise the remaining 3.4 million dollars will go up for a vote in the assembly by the end of the month.

If that passes then he and his officers can look forward to a time when they can focus a hundred percent on their work and stop worrying about the roof falling on their heads.