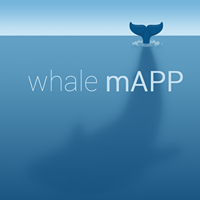 Southeast Alaska is a summer haven for whale researchers. They come to study the marine mammals who fill Southeast’s waters.

The problem is research is expensive and they can only study a handful of whales at a time. So now some scientists are turning to citizens and android smartphones to aid their cause. Joe Sykes reports.

Brenna Campbell has been sailing up and down the inside passage every summer for the past 25 years. She’s tied up for the night in Petersburg’s north harbor.

Campbell is a retired geologist and this little two berth sailing boat is her home. She lives a quiet life and doesn’t get many visitors. And because of her solitary sojourns she’s now at the center of an experiment that a group of scientists in the Pacific Northwest hope will change the future of whale research.

She shows me her android phone. “It’s a map you can download, it’s called whale mAPP,” she tells me.

The whale mAPP app allows users to log sightings of marine mammals. These are then entered into a database and sent back to Oregon State University where researcher Courtney Hann tries to figure out what the data means.

Hann is the brains behind this project and says in order to understand whales and their like we have to use all resources available.

“Instead of looking at the study of one whale in one small area, it’s saying let’s gather all of our forces together and work together to look at how these animals move across really vast distances we can’t even travel across,” she says.

Scientists might not be able to travel across these distances but the myriad people who boat up and down the Pacific Northwest during the summer months can and often do.

“Last summer I had 1200 sightings recorded over three months over the entire area of southeast Alaska and there was no one else who was able to collect that type of data,” she tells me.

Hann says collecting so much data helps scientists understand the behavior patterns of marine mammals but it also aids the development of a new scientific field.

Despite her optimism Hann isn’t blind to the drawbacks of citizen data. She understands civilians’ eyes aren’t as informed as scientists and so has built in a rating system on the app to try and counter errors in sightings.

Just like you can rate your favorite song on iTunes, whale mAPP has a starring system for judging how confident you are about what you saw. This allows novices like Brenna Campbell to use the app without worrying about making a mistake.

Back in Petersburg we’ve been trawling the dock for about an hour searching for a sign of marine life.

“I don’t see anything around. You hit the binoculars and it gives you your various species. I just saw twoSstellar sea lions last night so I’ll just hit Steller sea lions,” she says.

She then hits 5 stars because she is confident in her sighting and the entry goes into the database. It’s as easy as that. The App uses GPS satellites to track the smartphone’s movement so it doesn’t matter when a citizen scientist is out of cell service, a common problem in southeast Alaska. As soon as it’s uploaded the sighting can be seen by Hann and her team.

And while scientists like Hann are able to study that data and see what it means for the marine creatures of the pacific, Brenna Campbell is just happy she can contribute while doing the thing she loves: sailing.

“It’s fun that this information I’m collecting might actually make a difference in the survival of a species,” she says. “It makes you feel like you’re contributing not just being a sail bum.”

At the moment the app is only available in limited release on android but if Courtney Hann has her way sail bum scientists and smartphones will help shape the future of whale research in the pacific northwest.