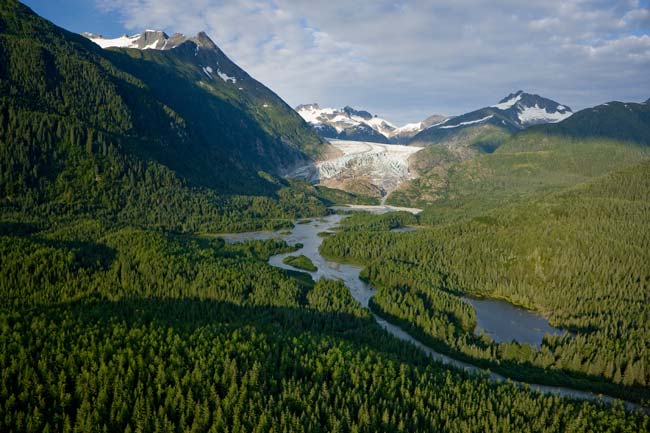 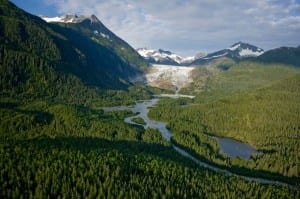 View of the Mendenhall Glacier in the Tongass National Forest. Photo/americanforests.org

While the Petersburg Borough Assembly has agreed on most recent issues, one topic brought some varying opinions at their last meeting. Assembly members were considering whether to support getting rid of the Roadless Rule on the Tongass.

At 17 million acres, the Tongass is the country’s largest national forest. It covers most of Southeast Alaska. The Roadless Rule keeps roads from being developed on the Tongass.

The borough resolution would ask Governor Walker to ask the federal court to reverse the Roadless Rule.

“This is such a hot topic with so many people that it’s uncomfortable to even speak out about it,” said Cindi Lagoudakis, one of two assembly members who voted against the resolution.

She says one of her main reasons for voting ‘no’ was the cost of litigation. She also says she doesn’t think much benefit would come to the state economically from getting rid of the Roadless Rule. She says it won’t revive the timber industry.

“I don’t feel that the Roadless Rule seriously impacted the ability of the Tongass to generate logging to generate income from logging,” Lagoudakis said. “I do think it has some impact. I think the bigger impact to economics is just the cost of operating in Southeast Alaska.”

Lagoudakis says she feels like the resolution is a false promise that there would be economic growth.

Assemblyman Jeigh Stanton Gregor did not support the resolution either. He says although the Roadless Rule is far from perfect, he can’t support getting rid of it.

“It’s an important part of preserving the long term health of our subsistence and commercial fisheries,” Stanton Gregor said. “And plus I think a wealth of other reasons, but based on those primarily I can’t support this resolution at present.”

On the other side of the issue were three assembly members: Nancy Strand, Mark Jensen, and Bob Lynn.

“I don’t agree with going to court and doing that. I think there needs to be some kind of getting to ‘yes’ here because there needs to be jobs in Southeast Alaska. I’m sorry, there just has to be,” Lynn said. “And how we get there…I think we need to have that, begin to generate that discussion.”

Assembly woman Nancy Strand voted for the resolution. She says she sees points on both sides of the issue. And, although she would prefer dealing with each proposed road individually, she thinks it could be interfering with development.

“With mining exploration becoming more and more active,” Strand said, “it seems to me that they should perhaps rethink the Roadless Rule.”

Jensen says he agrees with them that having the rule in place could be costing the region jobs.

“I’m not in favor of clear cut logging. I mean, that’s the thing of the past,” Jensen said. “But if you hold up road construction to a mine or to a hydro projects for instance if the road was ever going to go through to Kake by not being able to build a road…that increased the cost of that hydro-line significantly. So, I’m in support of this resolution to ask the Governor to ask the Federal court to reverse their decision.”

The borough assembly also heard from three residents who supported keeping the Roadless Rule in place: Mike Steinbrook, David Beebe, and Becky Knight. They spoke against the resolution for several reasons including the possibility of harming wildlife habitat; that the Roadless Rule still allows roads to be built on the Tongass, and the government’s inability to maintain the roads that are already in place.

“In times of fiscal conservatism, we should really be fixing what we have not adding more to the pot,” Knight said.

In the end the assembly vote was 3 to 2, which means it fails. It needed one more vote in favor of the resolution to pass.

Assemblymen Kurt Wohlhueter and John Havrilek were absent from the meeting.