A team of scientists is heading to Petersburg today to investigate a dead orca whale found on the Kupreanof Island shoreline.

Greg Lutton was moose hunting on Kupreanof Island this week and said he saw the dead whale on his way out of Portage Bay. Lutton said he was very surprised to see the dead whale. “I’ve been fishing for 40 years now and never seen a dead killer whale,” he said.

Lutton said the large female orca has no signs of trauma and he measured it to be 17 feet and four inches long. The carcass is on the beach, right at the entrance to the narrow bay. Portage Bay is on the northern side of Kupreanof Island, between Petersburg and Kake. Lutton said the dead whale still looks pretty fresh and thinks it just washed up there. 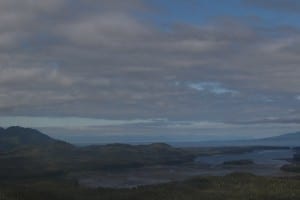 NOAA Fisheries spokeperson Julie Speegle said that agency is responding to the report. “We do have a team of marine mammal experts heading to Petersburg today to secure that killer whale and to get some initial samples. We are going forward with plans to do a necropsy in the next few days.”

Speegle cautioned people to stay away from the whale carcass. “For your own safety, we don’t know what killed this marine mammal and it’s also part of federal law to stay your distance from marine mammals.”

Sometimes the cause of a whale’s death can be determined quickly but it can take several months before necropsy results come back. Anyone else seeing a dead or stranded whale should report it on the NOAA Fisheries marine mammal stranding hotline 877-925-7773.