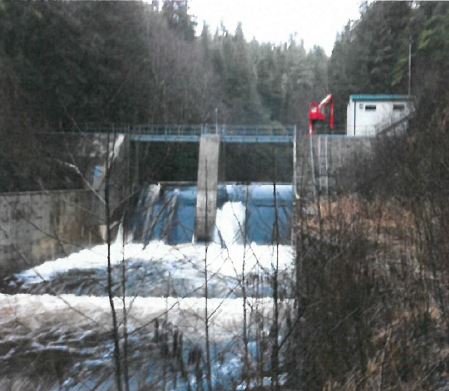 An electrical cooperative in Southeast Alaska is looking into developing a new hydro electric power plant in the village of Kake. The Inside Passage Electrical Cooperative this year fired up a new hydro plant in Hoonah and thinks the proposed plant in Kake could be easier to build than that one. That new power source could also cut Kake’s diesel generation in half.
Kake residents and businesses buy their electricity from the Inside Passage Electric Cooperative, a small member owned cooperative which also has customers in Hoonah, Angoon, Klukwan and the Chilkat Valley. IPEC celebrated the opening of a new hydro electric power plant in Hoonah this year and CEO Jodi Mitchell said the cooperative is delighted with the performance of that new plant.

“That project is saving over 10-thousand gallons of diesel per month, which is just so exciting,” Mitchell said. “Whenever it starts raining in our beautiful pristine lovely Southeast Alaska, I think about how that turbine is spinning and how that’s saving us so much money or saving the rate payers so much money.”

Now IPEC is pursuing a similar project for its 300 customers in Kake, another small Southeast town that has depended on diesel generators for power. IPEC used a grant from the state’s renewable energy fund to commission a reconnaissance study this year looking at three different options on Gunnuk Creek, right in the center of the village of over 600 people. 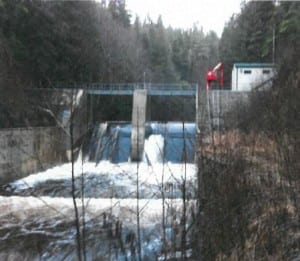 Photo from the Gunnuk Creek reconnaisance report of September 2015 commissioned by the Inside Passage Electric Cooperative.

Mitchell said the project would provide about half of Kake’s current energy needs. “It would save an estimated 6.2 million gallons of diesel over its 50-year design life. So, it will make a significant dent in the required diesel generation for Kake,” she said.

Depending on how the project is funded and other factors, it could lower Kake’s high electrical bills, about five times the cost of energy in larger Southeast communities.

Gunnuk Creek already has a dam completed in 2007 and designed to supply a hydro plant. It’s also a site that has housed a hydro plant in the past used to power a cannery. Mitchell said the Kake project would be similar in size to the one IPEC completed in Hoonah.

“But it will actually be less expensive to build, because again, because there’s already an existing dam there,” she noted. “And it’s also right in town. We won’t have to build a transmission line to it as we had to for the one in Hoonah.”

IPEC’s reconnaissance study looked at three construction alternatives. The cheapest option, and the one that’s recommended, comein at five and a half million dollars. The two other alternatives could provide more of Kake’s power needs but have price tags of over 18 million and 39 million dollars.

Kake leaders and residents for decades have been seeking a cheaper source of energy, whether it’s through a new project, or connection to the power grid that runs from Petersburg to Ketchikan. That’s another long-term possibility for Kake, a transmission line to Petersburg over 40 miles away. That project is estimated to cost 57-65 million dollars and is under environmental review.

The Southeast Alaska Power Agency would pursue that connection if it makes economic sense. In an email, SEAPA CEO Trey Acteson writes that the two projects are very different. He writes “The benefits of the proposed Kake-Petersburg Intertie are more comprehensive, providing a catalyst for long-term economic growth and prosperity through access to stable low cost renewable energy.” Acteson notes that electrical use in Kake is low and business development limited because of the high rates but that could change with a connection to SEAPA power sources.

IPEC’s Mitchel said the cooperative still supports constructing the transmission line from Petersburg. “But that project will probably just be placed on the back burner until the fiscal situation in the state improves,” Mitchell said.

In the meantime, IPEC is applying for grant money to build the Gunnuk Creek project. Officials with the city, school district, Kake Tribal Corporation and Southeast Conference have written letters in support of the project and an Alaska Energy Authority grant application. Those letters call this project “low hanging fruit” which will mean relatively quick reduction of electricity rates for the community.

Leaders say lower energy costs are needed for Kake to survive or grow, especially for businesses that do not benefit from the state’s Power Cost Equalization program that offset high rates.

The IPEC board this year decided to spend up to 250,000 dollars to do design work on the recommended alternative. That’s the next step for the project, besides permitting and securing funding. Mitchell hopes to have the project construction-ready as soon as next July.