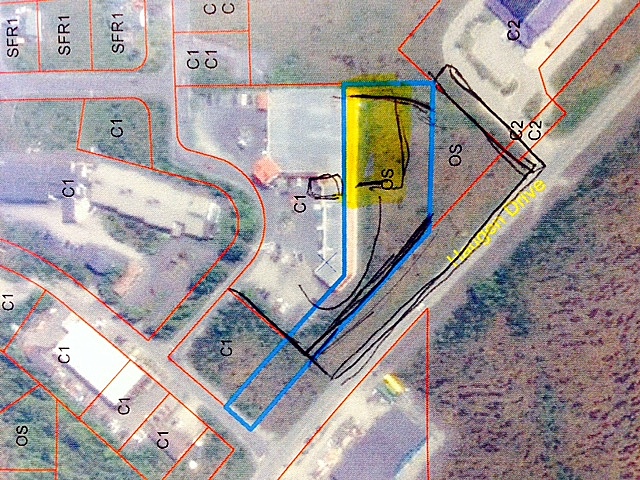 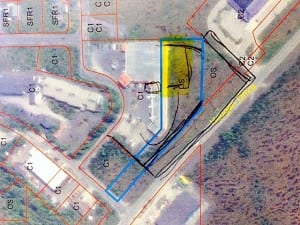 The highlighted yellow area shows the general area of the Hammer and Wikan expansion.

The Hammer and Wikan business in Petersburg would like to buy land from the Petersburg Borough to expand its grocery store along one of the town’s busiest roads. Store managers explained their intentions at a recent Planning and Zoning Commission meeting.
Hammer and Wikan would like to build on to the back of the grocery store to make room for better loading and unloading, storage space, and for housing more bulk items. The expansion would add 50 feet to the back side of the store along Haugen Drive.

Hammer and Wikan CEO Larry Martin told the commission it would be a public improvement.

“We would like to kick the back room out of the grocery store and get us a better receiving area, and also more backroom storage, and could open us up for Costco products,” Martin said. “And I think it would be good for the community.”

Martin said it would be a whole new structure added to the store but it would all look like the same building with doors connecting them. Workers would access the new area from the existing road, driving around the back of the complex.

Hammer and Wikan doesn’t care which way the borough decides to go as long as it’s available for commercial use.

“We would like to see that property put up for sale, whether it’s to us individually or as an auction is fine too,” Martin said. “Down the road that’s the only way we could expand.”

Initially, the borough looked at two parcels of public property between the store and Haugen. The assembly decided to keep one of them undeveloped as open space for the time being while considering the other one for commercial.

Borough Planning Director, Liz Cabrera, told the commission that by selling the property as commercial through an auction, the borough would no longer have full say in what happens to the land.

She said that the group’s bottom line right now was to decide if selling the public land was in the community’s best interest.

“Basically, you’re looking at it in terms, is this something that the borough should keep because there’s some other value or other use we want or is it okay to sell this property?” said Cabrera.

In the end, the commission voted to recommend that the borough move forward with the sale. They included language to maintain both the public utility easement on the lot and the pedestrian trail or to re-route the trail if needed.

A final vote on rezoning the land is at the borough assembly’s next meeting November 23.