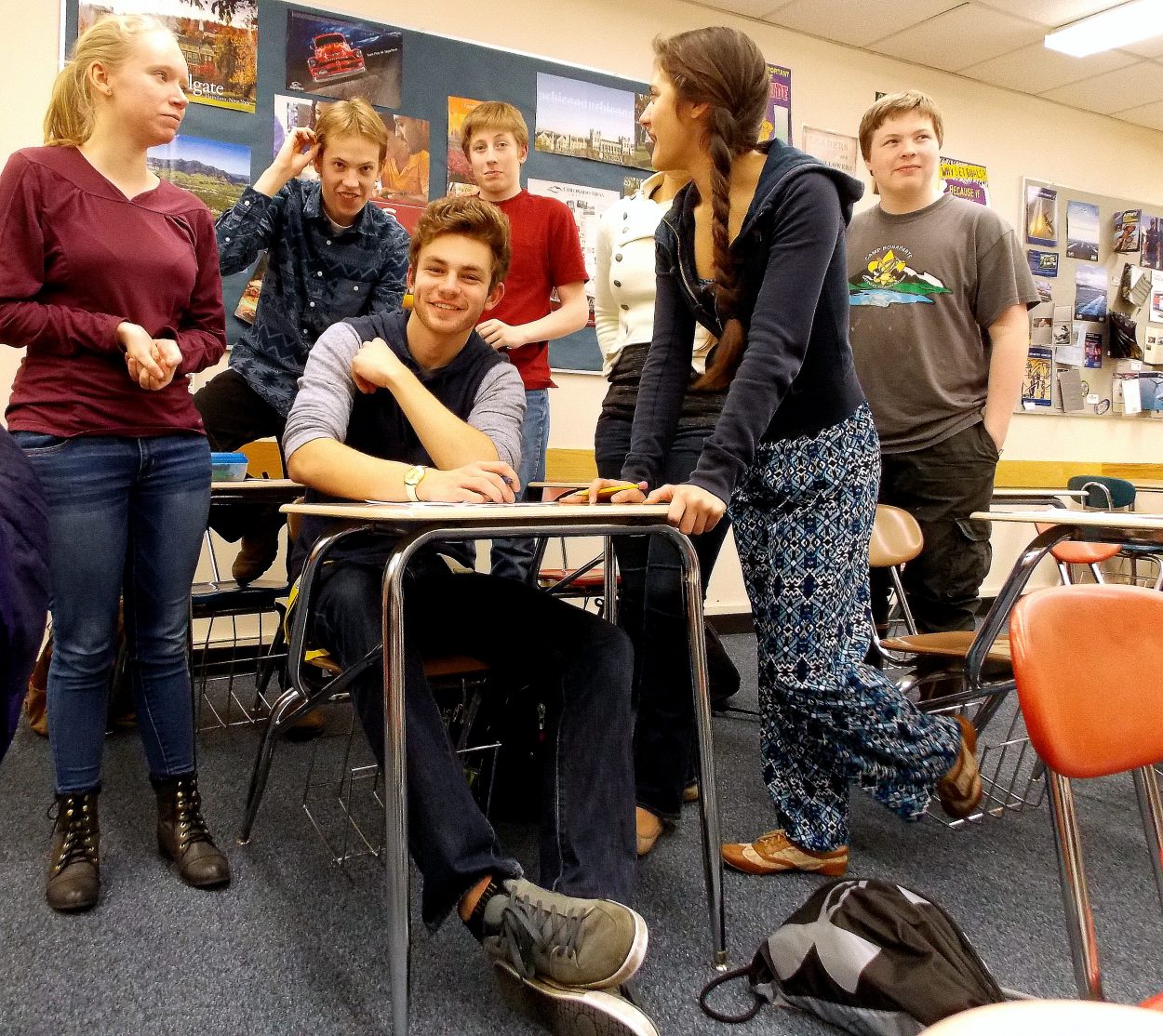 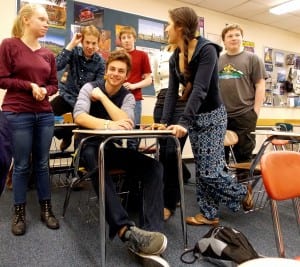 A group of Petersburg High School students are working on two-15 page science based research papers for a statewide competition. The Alaska Tsunami Bowl, an academic competition, will take place in Seward at the end of February. Angela Denning stopped in to one of the team’s after-school practices.


The competition has a theme every year and this year’s is “Community Resilience”.

The Petersburg students are split into two teams, Team A and B. Sophomore, Helen Martin, explains what Team A is doing.

“We’re working on a research paper about the probability of a tsunami hitting Petersburg and how we would be able to bounce back from that and how and what we would do to make sure everyone is safe before it happens,” Martin said.

Team B is researching, “a market crash in China and how it would affect us here,” said Anders Christensen, a sophomore on the team.

Christensen and the others in the group recently traveled to Sitka for Whalefest which is a gathering of scientists throughout Southeast. The students heard lectures on things like climate change and sustainable ecosystems. There was also a Quiz Bowl.

“So in Quiz bowl, there’s teams of four, they face off in ocean and science related questions and they have buzzers to buzz in,” said senior Chauncy Sandhoffer. “There’s multiple choice and there’s also written answers, written questions and overall it tests your science knowledge in certain topics and subjects.”

Senior Tucker Hagerman said the questions can range “from biology to chemistry through oceanography to the physical geography to all the way out into space.”

To prepare the students have been practicing two days a week after school. Besides practice tests, they go over presentations on specific topics.

“It was just the other week we did sponge and the anatomy of sponges and the different physiological parts to a sponge such as spongin and spicules,” Hagerman said. “The spongen is the protein within a sponge and the spicules are silica skeleton of a sponge.”

Petersburg did well at the Sitka Quiz Bowl. The A team, named “Ocean Motion” won three of its four matches. The B team won one of four.

The B team is known as “Suspiciously Swanky Scyphozoans”.

One of the coaches, Joni Johnson, said all the players pitched in.

“It seems like in the past we’ve had one person that’s dominated on the buzzer,” Johnson said, “and this time around there were a lot more folks weighing in. It was pretty cool.”

The Sitka Whalefest was considered a scrimmage. The real competition is at the end of February in Seward and that’s where the research papers come in.

Johnson says this year’s theme—community resilience–is broader based than in the past.

“It’s really more about socioeconomics or sociology than it is just a pure scientific question,” Johnson said. “At least for me anyways, it’s kind of outside my comfort zone as a coach and when you start talking about people and how people respond it gets even messier.”

Kelsa Sperl is a junior on Team B doing the market plan.

“Right now we’re researching, trying to narrow it down to just more Southeast Alaska,” Sperl said. “We started out by looking at just exports to China and the numbers and prices and now we’re trying to narrow it down to how much money just from Alaska and how much fish is exported from Alaska to China. And then we can see if China’s market crashed then how much that would affect Southeast Alaska and our fishing community.”

So far, Team A has found that Petersburg is not very prepared for a tsunami.

“Right now we’re thinking that if a tsunami hit it’d be super devastating,” said Chauncy Sandhoffer, “but there’s also a very small risk of one hitting.

That’s because of the geography and bathemetry, which is like a topographical map of the ocean floor.

Sophomore Marissa Nilsen said the bathemetery of the Stikine Flats near Petersburg, “looks flat but it actually kind of shears off and gets pretty deep pretty fast and that build up right there could slump and that would be an underwater avalanche and that could cause water displacement and the effect could be a tsunami.”

That’s not the only possible cause. It could be what happened a few years ago when a plate boundary off the panhandle of Alaska jumped a little bit, caused an earthquake and displaced water.

“We all blamed it on my little sister because we thought she was shaking the bed in the next room,” Murph said. “And then my mom come downstairs and she’s like, ‘There’s a tsunami warning we have to go.’ So we all packed up in the car and put our dogs in the car too and grabbed the peanut butter and the wool blankets and the Harry Potter books and went up to an elevation of 100 feet and read until they told us it was clear.”

There wasn’t a tsunami that day but these students are looking at the “what if” scenario.

The research papers will be graded by experts. Then each team will prepare a 20 minute oral presentation on their research.

This will be Tucker Hagerman’s third year going to Seward. He said the key is preparation.

“It’s very important to make sure that every little kink gets smoothed out to have a perfect presentation,” Hagerman said. “In some ways, yes, it is something to worry about but also there is a lot of time between now and then that we can put in a lot of effort and make sure that that gets done.”