Petersburg’s borough assembly may look into asking the legislature to re-direct tens of millions of dollars set aside for a proposed road and ferry connection to the nearby village of Kake. The idea sparked a discussion at the end of Petersburg’s assembly meeting Tuesday.

Assembly member Jeigh Stanton Gregor kicked off the discussion item saying he was interested in finding money to build Petersburg’s big capital projects, the police station, a new hospital and potential new harbor projects. Stanton Gregor wondered about the money appropriated for a road and ferry connection between Petersburg and Kake.

“And I start thinking about capital projects both in Petersburg and in Kake,” Stanton Gregor said. “Kake has capital projects I imagine on their list, I don’t wanna speak for Kake but I imagine they do. And I was wondering if it’d be possible for us to ask the legislature to re-allocate those funds proportionately to population and, I’m just thinking out loud here, proportionately to population and project type between Petersburg and Kake.” 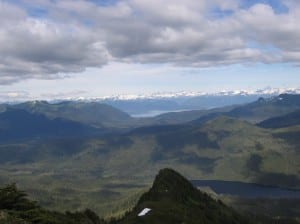 One possible route for a road across Kupreanof would link existing forest roads near Twelve Mile Creek on the northern end of the island.

Sitka Republican state senator Bert Stedman secured that 40 million dollar appropriation for the Kake road project in 2012 when he was co-chair of the Senate finance committee and the state was flush with oil money. He’s been a supporter of building a one lane gravel road along the northern end of Kupreanof Island, linking some existing forest roads. The appropriation has prompted an ongoing study for improving transportation access to Kake, done by planners at the Alaska Department of Transportation and the Federal Highway Administration. A draft environmental review of that project is expected out sometime this year. After all the planning work that’s happened, there’s about 37 million dollars left of that original appropriation.

Cindi Lagoudakis agreed the money could have better uses than the Kake road. “The federal highway administration at the last public meeting said the project doesn’t meet the purpose and need,” Lagoudakis said. “So if we can’t even plow the road out to Banana Point to keep it functional all winter I don’t see the Kake Petersburg road as being able to serve the function that it was originally intended. And I’d like that money to be an effective economic engine in Southeast Alaska so I’d be very much in favor of writing a letter and asking for that money to be re-directed.”

Others weren’t so certain that Petersburg, Kake or Southeast Alaska would be able to keep the money in the region if the legislature were to re-appropriate those funds.

Mayor Mark Jensen was leery about making such a request. “We should do a little research before we ask for something like this to be re-allocated,” Jensen said. “It might be able to stay in our district. That would be a good hope. But I’ve been told it could end up in the port of Anchorage. Just my opinion.”

The assembly agreed to do a little more research before making an official request and will have it on the agenda for their next meeting in February.

The city of Kupreanof opposes a road across the northern side of that island. Petersburg hasn’t taken an official position on the project yet. State representative Jonathan Kreiss Tomkins, who represents all three communities, said Kake was planning to vote on the issue this month.