Lightning hits jet: ‘It just sounded like a big explosion’ 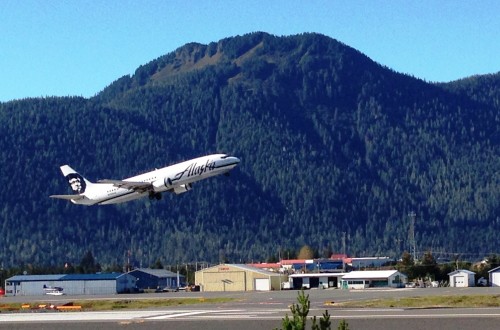 An Alaska Airlines jet takes off from Petersburg’s airport in 2014. A Sunday night flight from Seattle to Ketchikan and Juneau was struck by lightning. (Photo by Ed Schoenfeld/CoastAlaska News)

An Alaska Airlines flight on its way to Ketchikan and Juneau was struck by lightning Sunday night. No one was hurt, but it shook people up.

It was about 15 minutes into its trip to Ketchikan and Juneau.

“All of a sudden there was this, like a big boom, explosion-type sound. And everyone just kind of gasped on the plane, ‘What was that?’” she said.

George Reifenstein was also on the flight.

“It shook the plane too when it happened. It just sounded like a big explosion,” he said. “There was a brilliant flash. And some people who were aft of the engine saw some flames.”

“And then, maybe a minute went by before the pilot got on the intercom and he said, very calmly, ‘You know, that was lightning and this happens. And we have to turn around and head back to Seattle,'” Bakalar said.

The plane landed, everyone got off and was eventually loaded onto another jet for an uneventful flight north. That included a dance team, from Ketchikan, and passengers headed on to Sitka.

The lightning strike was a first for the passengers we talked to. But Zaninovich said it’s not rare.

“It’s fairly common. But we take these things seriously,” she said.

According to an article in Scientific American, each airplane in the U.S. commercial fleet is struck lightly by lightning more than once each year.

Passenger Bakalar, who writes the blog One Hot Mess, said she hopes it’s not all that common. Once, she said, was enough.

“There’s the expression, ‘Lightning won’t strike twice in one place,’ I guess. So maybe the chance of me being on another flight that gets hit by lightning is low. Let’s hope,” she said.

No official details about damage to the Boeing 737 are available yet. But some passengers said they saw burn marks once they left the plane.

Read Bakalar’s blog post, In Case You’ve Never Been on an Aircraft That’s Struck by Lightning, Please Allow Me to Enlighten You (So to Speak)