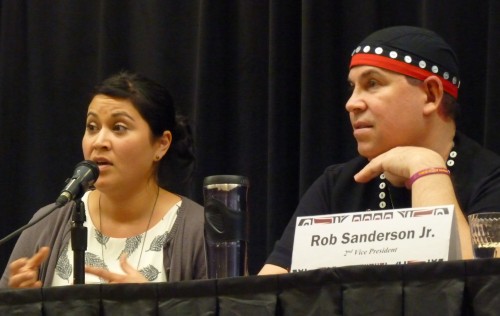 Southeast Alaska’s largest tribal government is pressing for an intensive environmental analysis of the region’s health. It’s part of a larger push for protection of transboundary rivers, which flow from British Columbia into the region.

The Central Council of Tlingit and Haida Indian Tribes of Alaska wants to document the region’s waterways so it can measure any damage that might be caused by mines on those rivers.

“We believe that there needs to be a sustained environmental analysis and data collection and modeling and the development of key indicators that determines what the environmental quality and health of the ecosystem exists in Southeast Alaska,” he said.

Will Micklin of the Tlingit-Haida Central Council discusses environmental monitoring March 9, 2016, at the Elizabeth Peratrovich Hall in Juneau. (Photo by Ed Schoenfeld/CoastAlaska News)

He said council officials have been meeting with the EPA, the State Department and other federal agencies.

He said the council understands there won’t be any new appropriations. But it’s come up with a plan to shuffle existing budgets to get the study going.

“We have put forward our analysis and we are expecting back from them in a very short time what sort of cooperation and collaboration we can pursue,” he said.

The central council has joined fisheries and environmental groups, as well as the Walker-Mallott administration, in lobbying the federal government to get involved in the issue.

The concerns focus on the Unuk, Stikine, Taku and other rivers that flow into Southeast Alaska waters.

Council official Rob Sanderson Jr. said mine development on the B.C. side of the border could pollute those waterways, damaging commercial fisheries and tourism.

“But the most important part, I believe, is our way of life. Protecting everything from the fish to the smallest organism in the river,” he said.

British Columbia mine developers and supporters have said they’ve built or will build safeguards to protect regional watersheds.

Meanwhile, Lt. Gov. Byron Mallott has been reaching out to Canadian officials overseeing such issues. After his election in October, Prime Minister Justin Trudeau appointed new ministers to agencies overseeing Environment and Climate Change, and Fisheries and Oceans.

Mallott said he asked about a frequent request of mine critics, that a cross-boundary water-issues panel called the International Joint Commission take up Alaska’s concerns.

He said he heard more interest in consultations and agreements already underway.

“The bilateral process that British Columbia and the state of Alaska are now engaged in would be the most likely place that an issue or question might suggest a referral to the IJC,” he said.

The lieutenant governor also said he’s also pursued International Joint Commission referral with the State Department. He said officials made it clear it’s not the direction they want to pursue.

But he’s asking for a more detailed explanation.

“We would like to have clarity, not so much for ourselves, but for all of the stakeholders engaged in this whole issue to hear a clear statement from the State Department as to their view of the place of a potential IJC referral,” he said.

Only one transboundary mine, the Red Chris, is in operation. Most others are under exploration, on hold or waiting for financing.