Alaska’s Board of Game last week voted to remove a requirement that animal traps have some kind of identification in Southeast Alaska and other parts of the state.

The Board met on statewide proposals to change hunting and trapping regulations last week in Fairbanks. The Alaska Trappers Association submitted proposal 78 seeking to remove the trapping ID requirement statewide. Markers with the trappers name or some other identifying information are required in Southeast. It’s also required around Tok if traps are set near a road.

The requirement was put in place because of conflicts between trappers and other people who have seen pets or wild animals caught in traps.
The Alaska Trappers Association proposed the change arguing trap tags are cumbersome and can lead to interference with lawful trapping.

“I’m going to vote for the proposal but I think somewhere along the line we have to encourage, I’m convinced the trappers association is on this and they’re working on it because it’s gonna take a big effort to educate the public, and the public has got responsibilities too,” said board member Pete Probasco of Palmer. “There’s a lot of irresponsible dog owners. They’re the ones who make lots of fuss, go out there in areas where dogs are supposed to be leashed run free and boy they raise a hue and cry.”

Board chair Ted Spraker of Soldotna and board member Nate Turner of Nenana are both members of the trappers association. 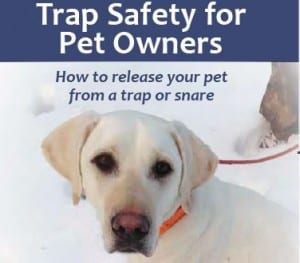 The Alaska Wildlife Alliance opposed the change arguing it would end trappers accountability for incidental catch of wildlife and pets.
Advisory committees for Juneau, Wrangell, Sitka and the Lynn Canal opposed removing the ID requirement.

Lieutenant Paul Fussey with the Alaska Wildlife Troopers said the ID helps with enforcement. “When we run into this incidents, or there’s snares or traps left after season, or someone’s caught a deer, in the majority of these cases, the public has found them, there’s no repercussion, we cannot find out who it is,” said Fussey. “So it helps with enforcement.” Fussey noted that 42 of 49 states, not including Hawaii, require trap tags.

The vote was 7-0 to approve the change and remove the ID requirement.

The board also voted down a proposal to require checking traps every 24 hours and a proposal to move trapping away from cities with more than 1000 people.

In other business, board members deferred action on a proposal that would have required a permit for anyone keeping domestic sheep within 15 miles of wild sheep populations.