As the regular Legislative session nears its scheduled end date, lawmakers are expecting to continue work on budget solutions past the 90-day mark approved by voters. Legislators still have to reconcile competing versions of the state budget and have yet to approve new taxes, changes to the Alaska Permanent Fund or other fiscal proposals. Petersburg’s representative in the state House, Sitka Democrat Jonathan Kreiss-Tomkins says those decisions have to be made this year but he thinks that work is going to take awhile.
Asked about the possibility of going into “extra innings,” to use a baseball metaphor, House district 35 representative Jonathan Kreiss-Tomkins gives it a 99 percent chance.

“This is probably one of the most historic legislative sessions in state history because of the magnitude of decisions, I’m gonna say needing to be make and should be made,” Kreiss-Tomkins said. “It’s uncertain whether they will be made, trying to create a fiscal plan, a sustainable future for the state of Alaska that involves everything from the Permanent Fund to broad based taxes to deep and strategic cuts to state spending, all of it and it’s super complex politically and financially and we’re nowhere close to a solution yet.”

Kreiss-Tomkins is a member of the House minority and expects his vote will be important for any budget agreement that will require the three-quarters vote legislature need to spend down the state’s constitutional budget reserve. 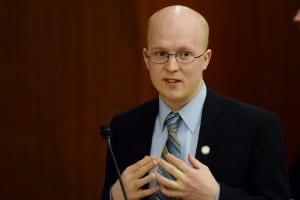 As for new revenue sources or other long term solutions, Kreiss-Tomkins said he’s had informal conversations about budget solutions with administration officials and other legislators.
Several bills introduced in the Senate propose to increase the share that school districts and municipalities would have to pay into employee retirement systems, cut municipal revenue sharing and end the Alaska performance scholarship for the top graduating seniors.

Kreiss-Tomkins said he’s not crazy about those proposals. “That’s kind of the direction the senate is heading,” he explained. “The governor has been very clear where he would like to see us go which is a sustainable fiscal plan and then the House has not really, when I say the house that’s probably an unfair generalization, Republican leadership in the house has not made it clear what they see as the sustainable solution. I guess were still kindof working through the options and there’s not a consensus approach yet.”

Also this month the Senate passed a bill allowing concealed weapons on University campuses and a senate committee moved a bill to eliminate daylight savings time and put the state on Pacific time. The Sitka Democrat does not think those measures should be moving ahead of the fiscal problems of the state. “You know right now we’re working on some of these I would say secondary or tertiary bills and there’s not a clear path forward on the budget and that’s really problematic to me. Whereas if we were making progress on the budget I wouldn’t see it so much as an issue that there’s these other pieces of legislation that we’re moving and are getting attention but unfortunately that’s not necessarily the case.”

In the final days of the regular session, the legislature is now operating under its 24-hour rule, meaning hearings can be called with only 24 hour advanced notice. During an April 7 press conference members of the Republican led House majority cautioned that things would be moving quickly.

“You know we’re facing some very difficult decisions and there are no easy choices,” said House Rules chairman and Anchorage Republican Craig Johnson. “As we go through the process we’re in we have to make decisions that will protect our economy, that will not be easy. You know grabbing the permanent fund is the easiest thing to do. It may or may not be the right thing to do but we’re looking at all the options and all the choices. There’s a lot of work going on on a lot of different things on some monumental pieces of legislation. So stand by, hang on and sharpen your pencils.”
House majority members were asked during that news conference whether it was a good use of the legislature’s time to be considering bills on daylight savings time or allowing concealed weapons on University of Alaska campuses, given the state’s fiscal situation.

Johnson thought it was a good use of time if committees do not have budget bills in front of them. “If state affairs had oil taxes or some of those other revenue sources in front and they were putting those off to hear those bills then I would say absolutely yes. But that’s not the case in state affairs and so, it’s their job to go out and vet those bills that are out there. It’s a yes and no question. If it’s putting off some of the important things that we need to do to stabilize our economy and do what we need to do then I would absolutely be saying we shouldn’t be doing it. But that’s not the case.”

House speaker, Mike Chenault a Nikiski Republican was hopeful that the work would be finished by the scheduled 90-day end of the regular session. “That would be our choice, we would like to get out of here on time. But that’s gonna depend on how the negotiations go between the minority and the senate and even the governor.”

Chenault thought legislators would enact new revenue sources and agreed that doing nothing was not an option. The 90-day scheduled end of the regular session is April 17.