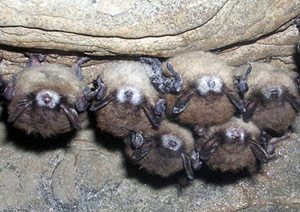 A disease that’s killed millions of bats on the East Coast was recently found in Washington state. Experts fear it’s only a matter of time before it reaches Alaska. Very little is known about bats in the state. To help learn more about bats in Southeast region the Alaska Department of Fish and Game has started a program that asks the public to help survey the flying mammals. Angela Denning reports:
White-nose bat syndrome keeps bats from hibernating properly. It’s a fungus that irritates them and wakes them up too early. And since it’s cold out the bats can’t find insects they need to survive so they starve.

“So it’s really, really serious,” said Steve Lewis with the Alaska Department of Fish and Game. “It may cause a couple of extinctions of our North American bats.”

Lewis and other bat experts don’t know how the disease could affect bats in Southeast because very little is known about bats in the region. People have long known they exist because they can be seen at night. But only in recent years have scientists identified seven species of bats in Southeast. Two larger-sized bats—the silver-haired bat and hoary bat. The later weighs between 20 and 35 grams which is about the size of a mouse. Then there are five kinds of little bats known as myotis. They are really tiny. 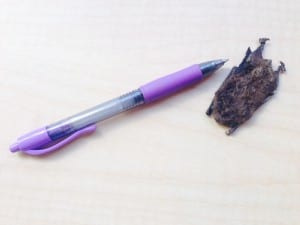 The carcass of this small brown bat compared to a pen. Alive they weigh between 5-7 grams. Photo/Angela Denning

As Lewis likes to say, “You could put three of them in an envelope and [it’s not] overweight.”

They weigh just 5 to 7 grams each. But the ravenous little guys love their insects. Just one bat can eat 1,000 insects in an hour. They prefer moths but also go after mosquitoes.

The five little bats look so similar that you can’t tell them apart just by looking at them. You have to test their DNA or turn to the tricky business of their calls.

There is acoustic equipment that can pick up bat calls and translate them into something human ears can hear. Lewis has been traveling around Southeast training the pubic on the equipment as part of a citizen bat monitoring program. The program relies heavily on the public to do the surveys. Half a dozen Petersburg residents have signed up to participate.

This is their part: They drive a specific route 45 minutes after sunset. There is a microphone attached to the roof of the car by a magnet. A cable connects it to a bat detector in the car. There’s also a GPS on the dashboard. You need two people, one to drive right around 20 miles per hour and the other to watch the equipment. In Petersburg the route makes a loop on Mitkof Island and takes about an hour and half to complete. 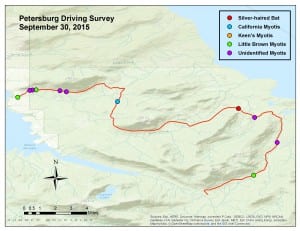 This graph shows the bat species detected near Petersburg in a survey done Sept. 30, 2015. Image courtesy of Steve Lewis

Lewis says you will know when you’ve heard some bats.

“Because you’ll have your bat detector turned up with the volume and so you’ll go along and you’ll hear tah tah tah….and that will be a bat,” Lewis said.

The longer part of the drumming call when the sound changes is the bat eating an insect. But it actually happens a lot faster. What we hear has been slowed down eight times.

Between the data stored on the bat detector and the GPS scientist will know what bats were heard where. All of the digital data will be stored on a memory card and later e-mailed to Juneau.

Scientists want to find out where the bats are hanging out. They are guessing that it’s a bit different than larger bat caves down south. 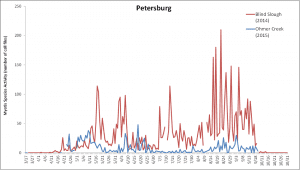 This graph shows the Myotis bat species documented near Petersburg with a fixed detector in recent years. Image courtesy of Steve Lewis

“We’re getting a feel that they hibernate less in caves and more in cracks in the ground, talus slopes and things which makes us hope that white-nosed syndrome won’t be quite as serious up here because there’s not hundreds of thousands of bats all aggregated into a cave hibernating together so it may not spread as fast anyway but we really don’t know at this point,” said Lewis.

They do know that at night the bats are foraging in open places like over muskegs and water. In the daytime, they like roosting in old growth trees, especially mothers with their pups who prefer being under the tree’s peeling bark on the south side where it’s warmer.

In general, Lewis says bats have a bad reputation for being scary which is undeserved. He says while you don’t want to handle them because they could carry rabies, they aren’t a scary creature of the night nor are they a kind of flying mouse as they’ve often been called. 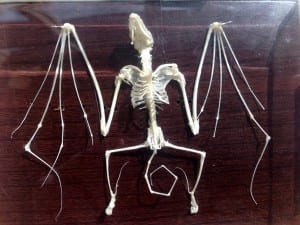 This bat skeleton shows that the fingers of a bat make up most of its wings. Photo/Angela Denning

“They’re not flying mice at all,” Lewis said. “They’re very small but they’re long lived so our bats here, the little brown bat lives anywhere from 20 to 35 years. And they have one pup a year if they manage to raise it. So, when they get knocked down by something like white nose it’s going to take a really long time for our bat populations to rebound.”

The citizen bat monitoring program will run May through September in Southeast. The goal is to get a survey done every two weeks at each location during that time.

The program began in Petersburg last summer. So far, five different kinds of bats have been detected.

The Petersburg Public Library has a sign-up sheet for the bat detector equipment. You sign up for a week at a time. It’s sensitive equipment and can’t be used in rain, dense fog or wind. You have to be trained before you can use it. Librarian Chris Weiss is able to do that training.