Students watch tadpoles hatch from eggs in the muskeg 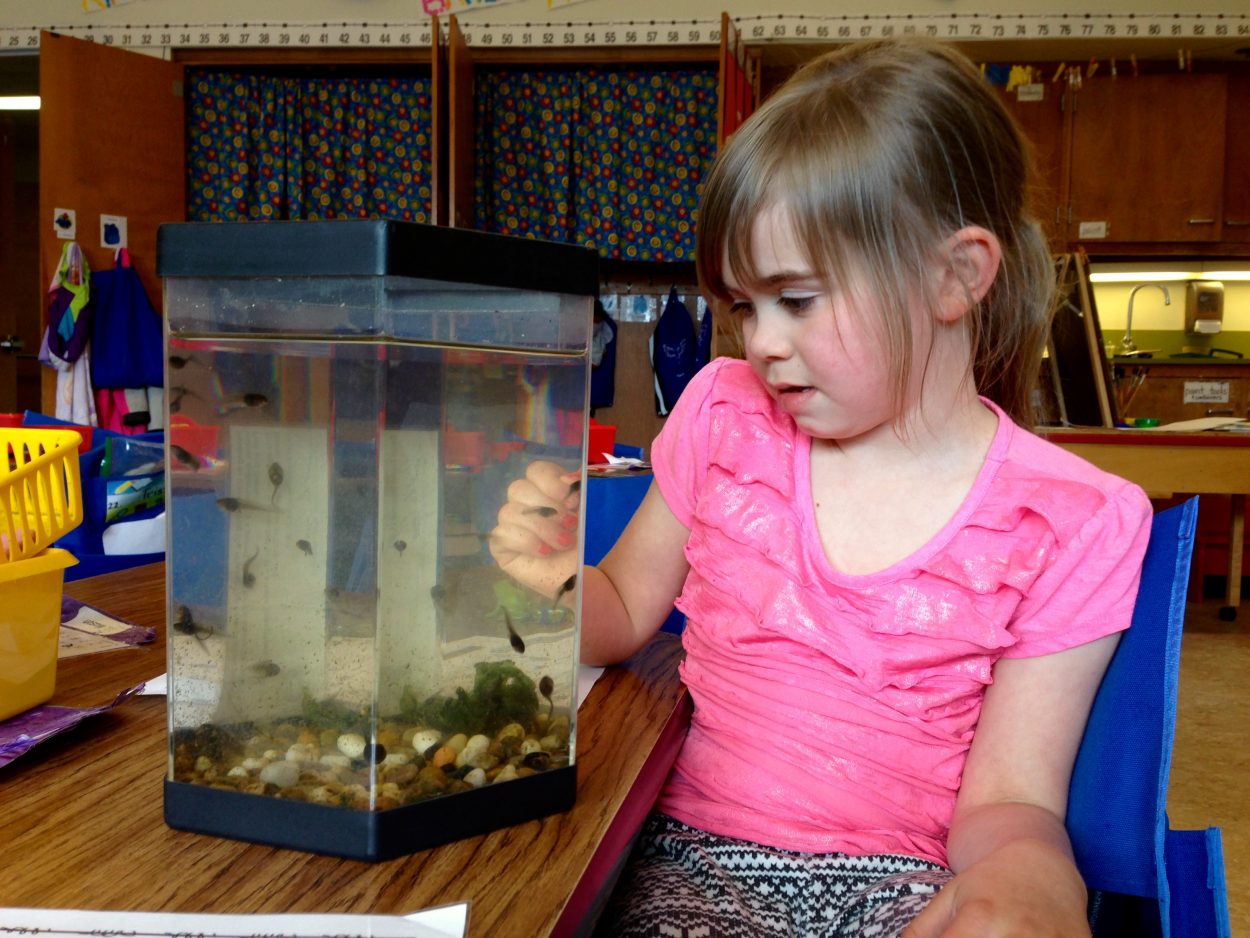 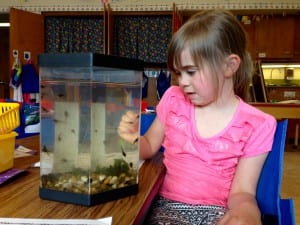 Brody Whitethorn checks out the tadpoles in her kindergarten classroom. Photo/Angela Denning

The life cycle of frogs is clearly fascinating to kids. So, when one Petersburg student brought some frog eggs to school it started off a flurry of activity. KFSK’s Angela Denning reports:


A few kindergartners are peering into a small aquarium of tadpoles that are feverishly going after green algae at the bottom of the tank.

These tadpoles used to be eggs in the muskeg behind James Clark’s house. He’s nine.

“Me and my friend went in muskeg and I saw some eggs,” Clark said. “And we were studying about frogs in reading group.”

So, he put some eggs in a jar, brought them to school and gave them to his reading teacher, Lisa Schramek.

“He was really excited,” Schramek said. “He wanted to bring some to school and share with everybody.”

“Yeah (laughs) a jar full of eggs,” Schramek said. “So, I immediately hopped on the Internet on my break to find out how to keep these eggs from dying.”

That was a learning process. Schramek got the eggs into an aquarium with rain water. A few weeks later they hatched.

“The kids were convinced after they hatched that they had died quickly because they hatched out, they were very small and dark black and they all fell to the bottom of the tank and were hardly making any movement at all,” said Schramek, “and that lasted for several days.”

Turns out that’s totally normal for newly hatched tadpoles. Schramek learned to feed them every day—algae from a rain barrel–and to change their water a few times a week.

Kindergarten teacher, Becky Martin, soon got on board with the project. When the aquarium came to visit her classroom the 5 and 6-year-olds loved it.

“And they were so motivated by that I thought okay, what do I do to link this to what we are already studying and doing?” Martin said.

She found little books about frogs and they talked about the frogs’ life cycle.

Kindergartner Drew Beavers explained, “They start out in a life cycle like this, eggs, tadpole, front feet, baby frog, and frog.”

He has grown up in Petersburg and has seen lots of frogs out in the wild but said he’d never seen a tadpole before.

“So what do you think about them?” I ask him.

Beavers is not alone. Classmate Brody Whitethorn likes them too. She remembers a day when she saw a bunch of frogs near Blind Slough.

“They were like bouncing everywhere,” Whitethorn said. “And I got to hold one of them. They were so slimy and they had little feet that were so cute.”

Flipping through a booklet about frogs Whitethorn explains the great variety that’s out there. 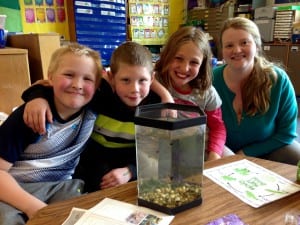 Amphibian expert, Josh Ream, thinks he knows exactly what kind of tad poles are in the school.

“Given the location, I’m almost certain this is a Columbia Spotted Frog,” Ream said.

Ream works for the Alaska Department of Fish and Game and is a founding member of Alaska’s Herpetological Society. He says there are six native species of frogs in the state. They’re important to the ecosystem because they keep insect populations in check and are prey for birds, fish and small mammals.

“Amphibians are considered great indicators of ecological health,” Ream said. “So whenever something starts to happen to an amphibian population it can be a good cue for researchers to look into what’s happening in the broader system.”

Ream found out about the tadpoles in Petersburg from Schramek.

She got a permit from Fish and Game to keep the tadpoles. It stipulates that the tadpoles cannot be in contact with any other amphibians to prevent diseases. And Ream says they are to be returned to their source.

“We think that it’s probably an ethical and responsible project to keep them in the classroom and release them at the site of capture,” he said.

“Like if we release them they can be like, ‘oh, maybe this is where we got found when we were in just eggs’,” Thynes said. “I want them to just like have a happy life. Not get disturbed or anything.”

School is almost over so it’s unknown what stage the tadpoles will be in when they’re released. Some of them seem just about ready to start growing legs.

Joshua Ream will be in Petersburg this weekend with the Alaska Herpetological Society. On Saturday, from 10 am to noon they will be conducting amphibian surveys at the baseball fields looking for frogs, salamanders, newts, and toads. They would like help from anyone interested. Meet by the batting cage before 10 a.m.