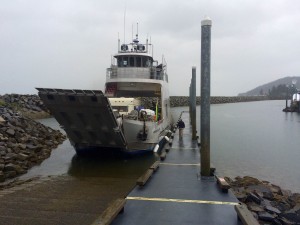 A small ferry boat in central Southeast Alaska, in just its second year of operation, is out of service indefinitely. The Rainforest Islander is a 65-foot converted landing craft based in Coffman Cove, on eastern Prince of Wales Island. The ferry has been making twice a week runs to Wrangell and Mitkof Island south of Petersburg since mid-April.

Robert Baker is one of two captains on the boat and is serving as a part-time general manager for the North End Ferry Authority. That’s the independent port authority formed by Coffman Cove residents to offer the service. Baker said the authority discovered water in the rear of the vessel Sunday, May 8th.

“The vibration from the starboard engine and screw has caused some cracks back there,” Baker said. “Some of the welds cracked and so it consequently cracked the plates in the bottom. And so it needs to be fixed before we can be in service again.”

Baker says the Rainforest Islander is waiting to get into the Wrangell boatyard to have the vessel fixed. He did not know a time frame for when the work could be completed. The service had to cancel bookings for the weeks of May 9 and May 16 and is not taking any reservations. A restart of service could be announced on the ferry’s website.

The Rainforest Islander started up last August after months of delays and then suffered mechanical problems not long after start-up. It was repaired and returned to service in November before shutting down for the winter the following month. The service was to run this year from mid-April through mid-October. The Rainforest Islander had originally planned to sail four days a week but reduced that to two days a week because of low bookings.