Community members in Petersburg have started up what they hope is a regular, perhaps monthly, discussion on drug abuse in the community and possible solutions. The first meeting this month focused on prosecution of drug dealers and help for those addicted.

More than two dozen residents and community leaders gathered at the ANB/ANS Hall this month on one of the nicer sunny summertime evenings of the year – giving up a couple hours to talk about a problem that’s not a new one for the town.

“A lot of us have concerns about the amount of drugs that are being dealt in the community,” said Will Ware, who was moderating the discussion. “And that is a righteous anger to have but certainly be careful for those that we’re not point fingers at those who are still in the midst of their addiction, or those that are out, or the beginning stages of it, this isn’t what it’s about. This is really for, this group got started at a grassroots level on folks who are frustrated at the amount of drugs being dealt in the community. Really that’s what kind of pushed this meeting tonight is what can we do to help curb that, if anything?”

“Well I think this a good start by coming together and being involved and deciding to make the commitment to be active and try and solve the problems that we’re having,” said Petersburg Police Chief Kelly Swihart. “I think from there we really have to drill down and identify what the issues we’re experiencing are, if those issues are an actual problem and then brainstorm ways to try to solve the problems and then implement those solutions. And then give it some time and see if it works.”

The group discussed a previous attempt in the community to restart a local crime stoppers hotline, where tips on criminal activity could be called into an anonymous hotline for a reward. Swihart noted that effort did not have enough interest to keep going. Others noted that the hotline would have been staffed by police dispatch and Swihart acknowledged that was an issue.

“I think that initially that the phone was set up in our office because the phone is manned 24-7,” he said. “And when I was up in the Valley, the crime stoppers line was maintained by the Palmer PD, although it came in on a non-recorded line. Up there you’ve got a higher population base, down here we’re gonna recognize voices. It’s hard to maintain that anonymity.” 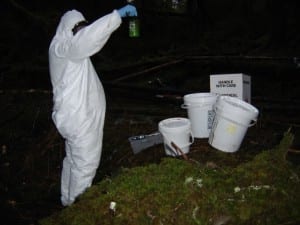 Law enforcement found the remnants of a suspected meth lab near Hammer Slough not far from downtown Petersburg in 2010. (KFSK file photo courtesy of the PPD)

Swihart also noted recently passed criminal justice reform legislation, Senate Bill 91. He said that bill would be decriminalizing some criminal acts and taking away tools for law enforcement. Residents questioned the chief about the possibility of having another drug dog in town.Swihart said the PPD was working to partner with the Drug Enforcement Agency to bring a drug dog to be based in Petersburg that would have to be available for use around the region or the state.

“As I said the dogs are incredible tools but they’re not a cure all,” Swihart said. “I wanna go back to that reasonable suspicion and probable cause and I know there’s been some discussion on that. We just can’t direct a dog to make that smell or that sniff anywhere we want because those sniffs in a lot of cases can be deemed searches and they’re protected under the fourth amendment. So I want people to realize while the dog will be a great benefit to us, it’s not something that we may be able to use in the way people are envisioning us to be able to us it.” 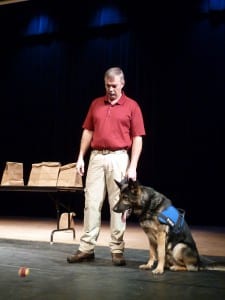 Audience members also talked with the chief about what kind of reporting on illegal activities the public could help with and the level of proof police needed to prosecute people dealing drugs. Swihart said over the past year law enforcement has seized 4,200 dosage units of methamphetamine and heroin either here or on its way to Petersburg.

“And like I said that has minimal positive impact on us because it is so prevalent and so cheap, when it gets picked off, they just send another shipment,” the chief said.

Besides the focus on trying to slow the supply of drugs in town, the discussion also turned to helping those who use drugs.

Chelsea Tremblay wanted to present a few ideas on that topic. “All the different ways from prevention to help with people who are in the midst of struggling, to help with their families to having a sober house living space to starting a Narcotics Anonymous,” she said. “I think this discussion of the prosecution and legal side of it and the state support is very important but we’re so familiar with icebergs up here that’s just the tip of it.”

Several former drug users talked about the lack of support services in Petersburg to help recovering addicts. Petersburg Medical Center’s clinic has a program using a drug called suboxone to help addicts, but drug users noted the high cost of that program.

DenAdel told the group she had numerous support groups when she lived in Juneau for 20 years and said it was difficult to live without that help here.

Nicole McMurren thought recovery support groups could be formed here. “When I came out of treatment and went into recovery for alcohol, there was a group sponsored by Petersburg mental health and it was until recently we lost some personnel, and that worked for me, because an anonymous group, I’m not a person of faith so that wasn’t a tool that was useful for me. Certainly we see that it can be useful for others but there was a group at that time. So there are other things and other kind of groups that can be formed to provide support, perhaps in a less formal kind of umbrella, but things we can do also.”

Petersburg has had community discussions in the past about drug abuse, some focusing on use amongst local school students.

School superintendent Erica Kludt Painter thought kids and adults in the community would benefit from learning about the drug problem. She pointed to her past experience working in rural Idaho and having the state police teaching about the problem there. “It was a perfect environment for it, easy to get all the components and there were meth labs all over where I was,” Kludt Painter said. ‘And so that education component was huge for the people to be looking for things. They would say, if you see piles of batteries, they gave us things to watch for. Even to watch what people are buying in stores and that sort of thing. So I still think that education piece in general is huge for our kids and our parents in our community in general.”

The group agreed to have regular meetings, possibly once a month. This first meeting was not heavily advertised but future meetings should be posted around the community. The next discussion is tentative scheduled for Thursday, July 14 at 7 p.m. at the ANB/ANS Hall.