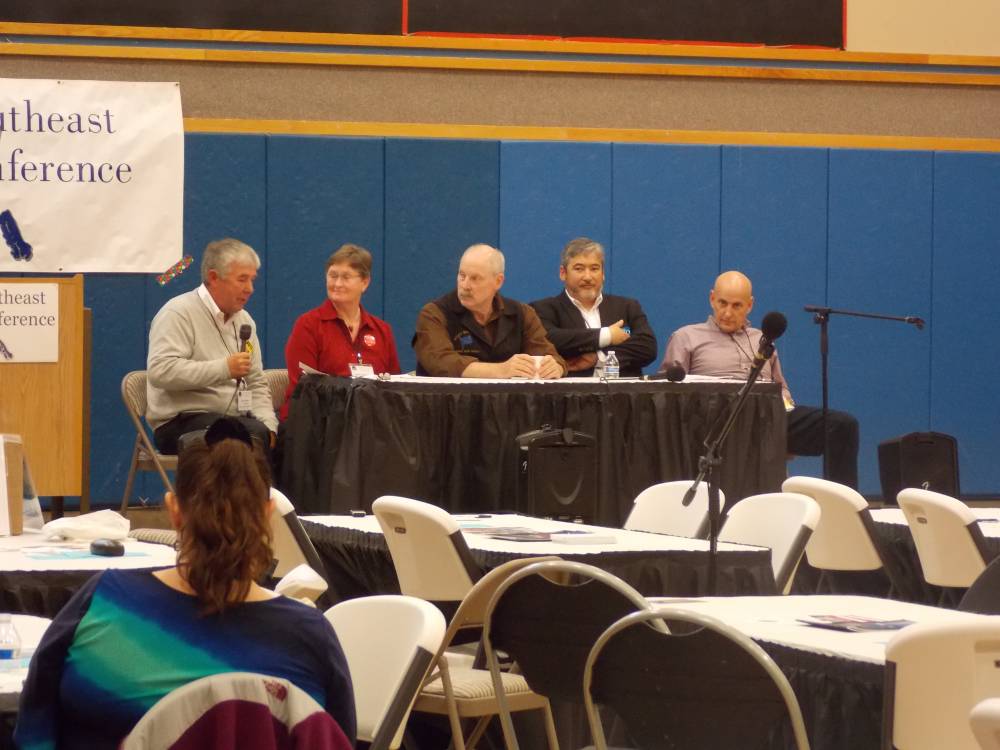 Candidates for state office representing Southeast Alaska presented a wide range of approaches to fixing the state’s multi-billion dollar budget crisis in September. Ideas ranged from use of Permanent Fund earnings, to an income tax, to more budget cuts, to harvesting natural resources.

Five candidates for state office appeared on a legislative panel hosted by Southeast Conference during that organization’s annual meeting in Petersburg. They aren’t all the candidates running for office in the region. The candidates were asked what they saw as the right balance of new revenues for the state.

Ketchikan state representative Dan Ortiz, an independent who caucused with the house minority, called it a travesty that the legislature didn’t come up with a fiscal plan. Ortiz thought the legislature would have to start voting on revenue measures this session. “We’re going to have to look at Permanent Fund earnings as a source of revenue at least in the short term for our operating budget, which means we need to restructure the Permanent Fund,” Ortiz said. “But in doing so I honestly believe that that’s the best hope that we have in preserving a Permanent Fund dividend into the future.” Ortiz also thought the best of some bad alternatives is an income tax and said he’d prefer that over a sales tax. He thought the state would have to look for other revenue and continue to cut spending.

One of Ortiz’ opponents in for the House district 36 seat, Ketchikan Republican Bob Sivertsen did not put too much stock in an income tax. “Prosperity isn’t gauged at how well the bureaucracy’s doing but it’s private business,” Sivertsen said. “We need to get out of the way. We’re going to have to use our natural resources as a big part of this long term. We talk about an income tax and you look at 43 percent of the state will pay that. It’ll raise approximately 330 million dollars, we don’t know what it costs to administrate it yet. When you’re talking about over a three billion dollar hole, 330 million doesn’t get it done.” Sivertsen thought it would be a multi-year process to fix the budget. Constitution party candidate Kenneth Shaw is also running for the house district 36 seat, representing Ketchikan and Wrangell. 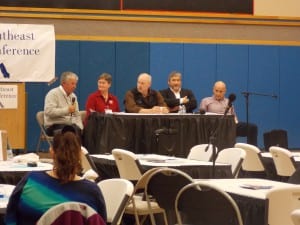 Another candidate for state house, Sitka Republican Sheila Finkenbinder is seeking the district 35 seat, representing Sitka, Petersburg, most of Prince of Wales Island and a number of smaller villages. “Being a brand new candidate here it’s a little early for me to be speaking very intelligently about sources of revenue but like Mr. Ortiz I’ve been listening to my constituents, or not yet constituents, voters,” Finkenbinder said. “When we’re talking about taxes they are preferring an income tax, if it comes to that, over a sales tax. People talk about the education tax that they used to pay and the income tax that they used to pay. I’ve also heard ideas such as the fish box tax for charter guided and unguided fishermen that take a lot of fish out of this state.”

Finkenbinder also thought the state would have to restructure the Permanent Fund and promote new businesses to bring more money to Alaska. Finkenbinder is challenging incumbent democrat Jonathan Kreiss-Tomkins for the house district 35 seat. Kreiss-Tomkins had a prior engagement and did not appear at the legislative panel.

Juneau Democrat Sam Kito III told the gathering that the legislature would not be able to make significant reductions in spending for some of the largest pieces of the state budget without significant negative impacts to the state’s economy. He suggested capping the Permanent Fund dividend and using the fund’s earnings would cover a big part of the state’s budget deficit.

“What the governor has put forward puts a lot of components and tools on the table that we can use in the legislature to figure out how we’re going to identify or divide up that revenue stream so that we can have a real discussion about what our state’s going to look like in five years,” Kito said. “And if we don’t do something this year I think most people have said and I agree that we end up in a situation where we could very send our state’s economy into a recession.”

“And if we don’t do that and just plug the hole with this tax, that tax or the next guy’s tax all we’re going to do is be right back in the same boat in two to three years,” Stedman said. “So you’re going to see more cuts coming in the next two to three years or so and they’re going to be relatively painful because the easy cuts have already been done.” Stedman represents southern and central Southeast Alaska communities.

Lieutenant governor Byron Mallott ended his keynote speech to Southeast conference with the belief that state government will make necessary changes. “I believe the 2017 Alaska legislature will do what it must because the alternatives are too draconian to consider,” Mallott said.

Governor Walker last year proposed a wide array of budget cuts and new revenue sources to make up for a deficit of over four billion dollars. The legislature did not enact any of Walker’s budget proposals but did cut state spending.

Editor’s note: this story has been corrected to show Haines write-in candidate Bill McCord’s challenge for the House district 33 seat.