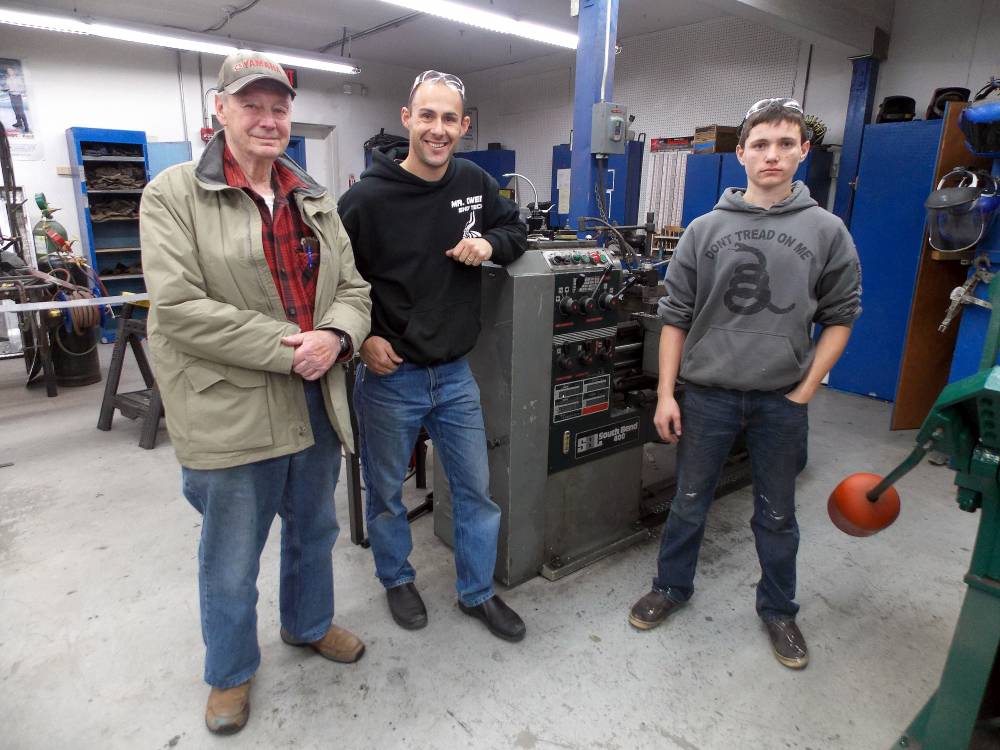 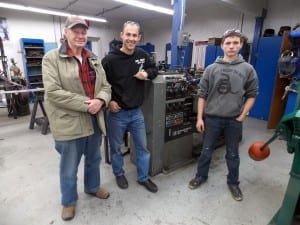 Shop class isn’t for everyone but for some students, it’s everything. A former Petersburg High School shop teacher, who is connecting with new students, agrees that the shop is where it’s at. KFSK’s Angela Denning has more:

15-year-old Sebastian Davis is securing an aluminum rod to a part of a lathe machine in the high school shop. The teenager is interested in learning more about the huge machine, which turns metal so it can be carved and shaped. Davis starts up the motor and, wearing a face shield, he slowly leans in and begins carving into the metal piece.

Paying close attention to the progress is Bill Neumann, a Petersburg shop teacher from decades ago. He’s wearing a baseball cap and a red flannel shirt.

The school purchased the lathe in the late 1980s while Neumann was still the shop teacher.

This lathe is for metal. But the teenager is also interested in wood working. Davis has begun a new project of building a large dog house in the next room. He walks me over to a pile of six-foot long alder logs that he harvested.

He says the house he is making is for his large dog Milly.

“Half German Shepard, half Malamute,” Davis says. “And I got a little sled over here that I position them in, run that on the band saw, and makes two sides flat, nice and level them up.” 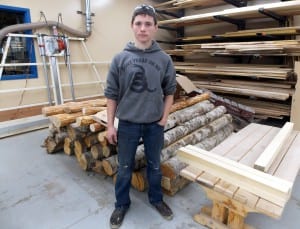 Shop class has interested Davis from the beginning. As a freshman he built a fold-up wood stove for camping. He says he likes that shop is different than his other high school classes.

“I’m not sitting down,” Davis says. “I’m actually doing stuff with my hands. And not listening to the teacher lecture us the whole time.”

Neumann, the former shop teacher, understands. He’s taught the subject for 30 years. He retired from teaching in Petersburg in 1989.

“Well, I loved it and I got along very well with all my students,” Neumann says. “I just loved being a shop teacher. It was so neat. The informal-ness I guess. I don’t think I could have been a classroom teacher like a math or history teacher or something.”

Neumann empties a plastic bag full of knives into a cardboard box.

“Every year we would have the class and I would make a knife from scratch and the kids would get their metal out,” Neumann says. “I have no idea how many we made in here. 500 maybe over the years you know. Kids loved making them, it was a great project. This is one I think I carried for years and years deer hunting, gutting out deer and that I mean we used them, and the kids all used them.”

“We mass produced those and we sold them as quick as we could build them and I bet we made, over a number of years, probably 100 smokehouses and they’re still around town,” Neumann says.

Back at the lathe machine Neumann monitors Davis’ work and tells him, “I think that would be just…if you wanted to cut a square shoulder on something, you know, but I think the round nose, just the roughing it down.”

One of Neumann’s favorite projects as a teacher was helping his class build a mini log cabin out of alder complete with windows and furniture. Now, he will get a chance to see that kind of project come together again as Davis pursues his log cabin dog house.

The idea to bring the two together was the current shop teacher’s, Dave Owens.

“I thought what a great opportunity, we’ve got a young guy who’s interested in this, Sebastian has a lot of skills, a lot of talents just working with his hands, watching him take on that project and wants to do it right,” Owens says. “It just seemed like a natural connection to bring the two of them in.”

Neumann has visited the school shop over the last 27 years that he’s been retired, maybe a few times a year. But now he says he plans to make it a regular habit.