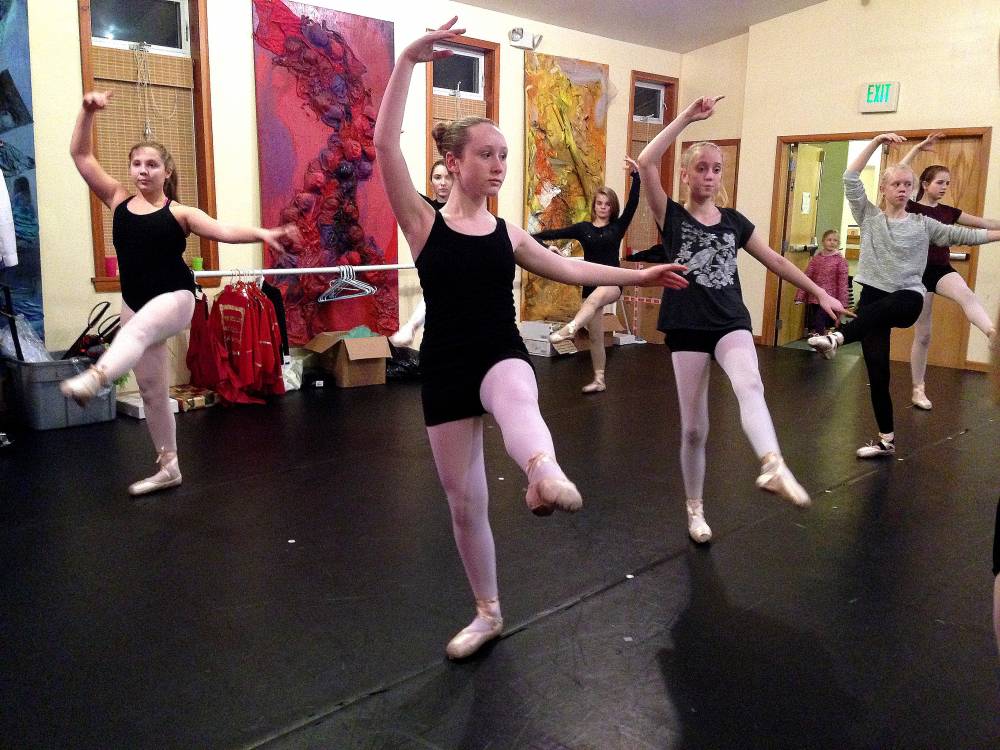 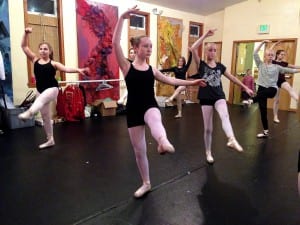 Rose Quitslund, who will dance as Clara in the Nutcracker, practices ballet drills in the Pointe 1 class at MDT studio. Photo/Angela Denning

Petersburg might be a small island town of 3,000 but the local kids really like to dance. 150 children will be in The Nutcracker ballet this weekend. KFSK’s Angela Denning stopped by Mitkof Dance Troupe Studio during one of the ballet classes to find out more.

Lanky teenagers in black leotards and pink ballet shoes are stretching at a ballet barre. It’s the Point I Class so these students are learning how to move gracefully on their tip toes.

Teacher Kathleen Boggs says the class is, “very taxing on both body and mind.”

Boggs knows ballet well. She started dancing when she was three-years-old. She understands the dedication it takes to learn its technical moves.

And she knows the Nutcracker particularly well. She was in it herself since she was five. The local dance studio has been focused on the recital since the first day of classes in September.

“The nutcracker takes more work than any other production because it’s a full story,” Boggs said. “So in addition to every class working on their pieces there’s also solo parts, duets, and so many additional parts and an entire production that goes into it. So we work on their pieces in class but then they have to come on Saturdays, we come on evenings, we come on Fridays and we keep working.”

The new pointe students will not be “on pointe” on stage but they will be dancing. Although the Nutcracker is a traditional ballet, Petersburg’s version includes preschool through high school aged dancers.

With 150 dancers, costumes are a huge part of the production. Dance teacher, Kaili Swanson says parents really get involved.

“It’s wonderful,” she said. “I have a lot of parents who will say, ‘Can I help with anything?’ [I tell them] yes, I have some costumes that need help, to be fixed or whatever. ‘Okay, I’ll take them on.’ It’s great. Parents are very willing to help with anything they can.” 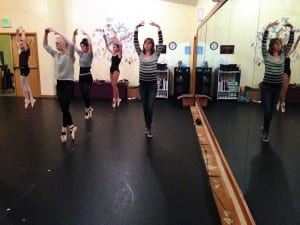 In larger cities, ballet students often just do that–ballet. Boggs grew up in Tucson, Arizona and by the time she was in middle school she was going to dance practice four days a week.

“Just for class and if I wanted to be part of the show we would audition and then have additional rehearsals in the evenings and on Saturdays aside from our classes,” Boggs said.

In Petersburg the teachers balance their dance classes with what they know students can give. In a small town, kids are often involved in many different things.

“We have to work around several other sports, and teams and groups and activities and organizations and it’s really stressful to do so but we support them in being part of all of those things,” Boggs said. “That makes it really challenging to have them here. So when they’re here we are demanding of their time and of their concentration and their effort.”

Except for Clara. She’s the main character in the Nutcracker ballet and the role requires a special dedication to dance.

“We look at the young lady’s dancing ability but also her maturity level and her willingness to accept the challenge,” Boggs said.

The dancer makes a commitment to the ballet that lasts the season. She can’t be away at sporting events or go on vacation over Thanksgiving. In addition to her own dance classes she comes to the studio an extra four or five times a week.

And that was just fine for 13-year-old Rose Quitslund. 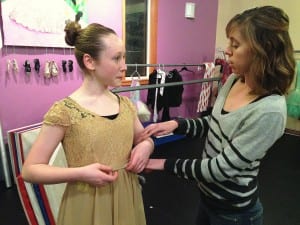 13-year-old Rose Quitslund, who will play Clara in the Nutcracker, gets help with a costume from MDT Studio dance teacher Kathleen Boggs. Photo/Angela Denning

Quitslund was asked to play the part by her teacher on a Sunday but she couldn’t tell her peers until that Wednesday.

“So it was really, really hard not to tell my friends because everybody was like ‘Oh, my gosh, who’s going to be Clara?’ Quitslund said. “It was really hard but I didn’t tell anybody.”

Swanson made that call. She says it’s been wonderful to work with Quitslund.

“She’s such an intuitive dancer,” Swanson said. “You tell her to do something and she just does it no problem and makes it beautiful.”

Quitslund says she is attracted to dance like she is other art.

“I’ve always really liked drawing and art and I’ve done dance since I was two so it’s another form of art,” Quitslund said. “I don’t know, it’s like you get to express yourself in another way.”

Quitslund rejoins her peers in front of the room-long mirror and follows her teacher in more dance drills. For her, the effort is worth it when she can make art come to life.