The Petersburg borough assembly has started making changes to a local law on ballot initiatives, referendums and special elections. The changes would remove the deadline for filing ballot initiative petitions six months in advance of an election and may mean fewer special elections in the future.
The changes will impact the timing of when an issue goes to a public vote. Under the current law, completed initiative or referendum petitions go on a ballot within 90 days. If there’s a regular election within that timeframe it goes on that ballot. If not, the borough has to hold a special election within 90 days.
The proposed change would only require putting an issue up to vote at any election already scheduled at least 90 days from certification of a completed petition. That means most citizen votes would be decided in the regular election in October. 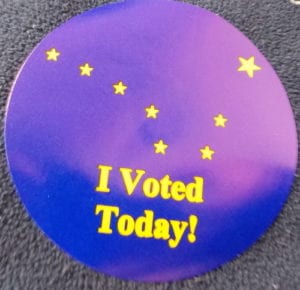 Assembly member Eric Castro wanted to remove the special election requirement. “I really do like the idea of that,” Castro said. “I think it’s important for our community members to have a voice but not necessarily at the expense of the entire population.”

It costs the borough money to put on an election. The last special election in Petersburg was in 2004. The ordinance change doesn’t prohibit a special election ballot if the assembly decides the issue needs to go to a vote sooner than October.

Assembly member Kurt Wohlhueter questioned how that would work. “Would that have to be something that the assembly would have to vote on if they wanted to have a special election if somebody approached us and it was like mid-, you know between mid elections or is that going to be something that they could just file a citizens initiative and go through that process?” Wohlhueter asked.

“It would have to come to the assembly and we would vote on it, whether to have a special election,” responded mayor Mark Jensen.

Another change is removing a 180 deadline for filing a petition for an initiative vote. Under the new ordinance, a petition completed by sponsors and certified by the borough clerk would have to be done at least 90 days from a planned election. Anytime after that and the borough could wait to put an issue up to vote the following year. If this ordinance passes, it actually gives residents more time this spring to get a petition signed by voters and certified by the borough clerk.
The assembly passed the changes in first reading unanimously.

The assembly also approved the third and final reading of an ordinance making changes to borough’s Local Improvement District process. Borough residents within the old city limits can request the extension of a borough service or utility through that process as long as two-thirds of the petitioners agree to pay for that service extension. The borough plans to send out notices to some neighborhoods that could seek paving through a Local Improvement District this year. The ordinance leaves it up to the assembly to set terms for paying back the cost of a project and also gives the assembly the power to stop a project during the process. Mayor Mark Jensen and assembly member Bob Lynn voted against those changes.