U.S. Forest Service in Petersburg gears up for a fish pass project and timber sale 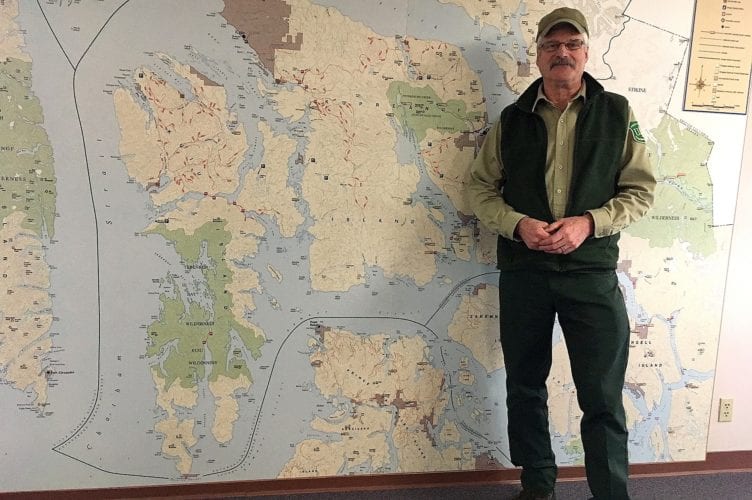 Dave Zimmerman stands next to a map of the Petersburg Ranger District that’s featured near the main entrance of the U.S. Forest Service office in downtown Petersburg. Photo/Angela Denning

The Petersburg Ranger District is gearing up for another season out in the field on the Tongass National Forest. As Angela Denning reports, a local project of priority is reconstructing a fish passage in Mitchell Creek. And there is a plan try and re-sell timber on North Kuiu Island.


I meet with Dave Zimmerman in his office at the U.S. Forest Service building in downtown Petersburg. He’s the district ranger for the Petersburg area. He shows me a giant map on the wall, which includes Mitkof, Kupreanof, and Kuiu Islands and some mainland near Thomas Bay. Within these boundaries, the local district helps manage wildlife, fisheries, timber, plants, hydrology, and recreation and trails.

“Our job, the forest service, people want us to be stewards of this land,” Zimmerman said. “We also want it available for people to see and use. Drive our road systems, fly into our lakes, fish, photos, so it is a national forest, it’s for the American public to use.”

Besides recreation, there are occasional commercial uses in the forest like mining and timber.

Currently, the district is reappraising timber on northern Kuiu Island for resale this year. They tried to sell it last year but Zimmerman says no one was interested until after the sale was over. So they are repackaging the deal with the hopes to have it sold by September. It is estimated to include 13 to 14 million board feet of old growth.

Besides timber, other areas of the Forest Service are ramping up as well. The district hires about 15 seasonal employees to help get projects done when the weather is good.

“Ninety-nine percent of that work is outside of Petersburg here. It’s in the field somewhere,” Zimmerman said.

This summer one of the sites to be focused on will be Mitchell Creek on the Lindenburg Peninsula of Kupreanof Island. Workers will be reconstructing a salmon pass there.

“It was built about 25-30 years ago. There’s a falls there that the coho couldn’t get up,” Zimmerman said. “So, they built this fish passage if you will, it’s not really a fish ladder but there’s different pools so they can work their way up and above. So, we’ve opened up more habitat for coho. And they’ve been coming back and we’ve increased that coho production on that stream.”

Zimmerman says most of the fish biologists will be working with that project this summer.

The Forest Service keeps track of all of the creeks that have fish within the district. Workers map them, marking barriers where the fish can’t swim any further. Depending on how much habitat is above the barrier the forest service might step in to expand it like they are at Mitchell Creek.

“If it just goes for a little ways it’s not really worth $300,000 or $400,000 to do something,” Zimmerman said. “If it opens another couple miles of stream for habitat it becomes economical that we do something like that or at least consider it.”

Zimmerman has been working with the Forest Service for 48 years. He says the budget is often cut, very seldom do they see increases. In recent years, the recreation arm has seen decreases. This year, he says timber funding went down. But the Mitchell Creek fish pass reconstruction is the type of project that continues to receive support.

“It’s a matter of strategically getting the projects that are going to be the biggest return for our money,” Zimmerman said.

In other words, the more fish that spawn, the population would increase and could benefit fishermen.

“The reason that we wanted to go there is it’s getting to the point that it’s starting to disintegrate a little bit and so that structure is starting to maybe fail,” Zimmerman said. “So, we wanted to repair it before it did a total failure.”

Zimmerman says they hope the rebuild will last for the next 50 years.

One trail project that has seen funding recently is the popular Raven’s Roost Trail in Petersburg. The first mile has been redone, replacing planks across muskeg with a wide, gravel path. Zimmerman says there is funding for reconstructing the rest of the trail another three miles up to the Raven’s Roost Cabin.

“We’re completing the survey and design and that’s going to be used to prepare a contract for the reconstruction of the remaining three miles,” Zimmerman said. “They’re redesigning that from where the gravel stops now and you start getting steeper. That’s all gonna be relocated and redesigned and reconstructed. And once you get on top, where it’s flat, that’s not as bad. So, reconstruction is funded and planned for 2019 to 2021.”

So, that’s still a few years off. But the Mitchell Creek project will get started soon. And then there will be ongoing maintenance projects this season. The district works closely with the Petersburg Indian Association, which has a contract to do a lot of the road maintenance on Mitkof Island.