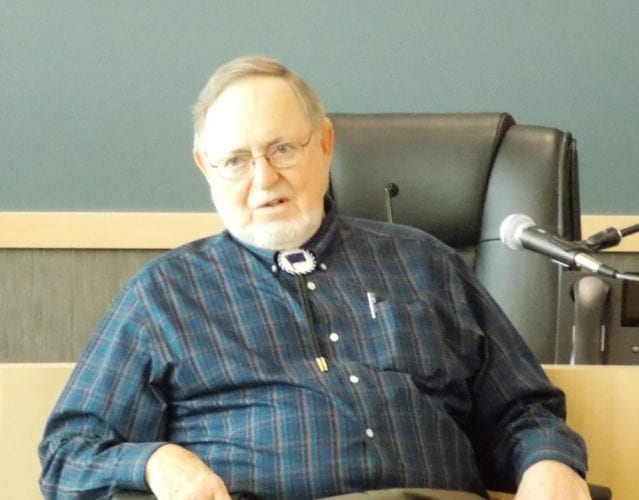 Alaska Congressman Don Young Monday defended his bill that could give up to two million acres of the Tongass National Forest to the state of Alaska. Young was in Petersburg, a community that just passed a resolution opposing his legislation. Young told an audience in Petersburg that the municipality would not lose federal funding because of his bill and said he wouldn’t run for re-election if it did.

Young’s bill HR 232 would allow states to select or purchase up to two million acres of National Forest land for logging or other uses. Petersburg’s borough assembly came out against that bill earlier this month, citing concerns over state management of the forest land, potential loss of federal funding and U.S. Forest Service jobs. Young explained to a couple dozen residents why he’s supporting the bill.

“The Tongass was not allowed to be selected lands when we became a state,” Young explained. “We were allowed 103 million acres of land as a state, of our selection of lands that were not reserved at that time and the Tongass was reserved. So the only land you have are the communities themselves. There are no other lands. There’s no opportunity of any other type of resources development and you have to have resources development, in time you will need it. So if you don’t want it, if Petersburg doesn’t want it, that’s your business. But I am still going to push for two million acres of land in Southeast Alaska for the people in Southeast Alaska for the improvement of each of their communities.”

Petersburg receives Payment in Lieu of Taxes, or PILT payments, because the borough cannot collect property tax on the federal land. Within the borough, 96 percent of the land is part of the National Forest. The borough in the past has also received payments for schools and road work, under the Secure Rural Schools Act. That program, passed by Congress in 2000, increased and stabilized the forest receipt payments that had once depended on federal revenue from timber sales and other economic activity on national forests. It has meant hundreds of millions to rural communities near National Forests around the country. Both PILT payments and Secure Rural Schools need reauthorization by Congress to continue. Young said his bill wouldn’t impact those payments.

“You’re not going to lose your PILT monies, you wont lose your Rural School monies if there’s any monies,” he said. “And I say if, I think we’re gonna still maintain that. The whole thing was based on very frankly stumpage. We don’t cut any more trees, so if they wanna save the trees then they oughta pay for it. And so I think your school funding, somewhat protected, maybe not increased but protected. That’s what I’m predicting will happen. It’s part of the program.”

Both PILT and Secure Rural Schools payments are based on the amount of forest land in a borough. Audience members challenged Young on the point, questioning how Petersburg’s federal payments could remain the same if there’s less National Forest Land in Alaska.

The topic of federal funding came up for other programs. Audience members thanked him for his past support of funding for Essential Air Service, the Alaska Sea Grant Program and public broadcasting. Those programs would be eliminated under a budget proposed by President Trump. Young thinks Congress will approve a budget with those programs funded.

“Now in the lower 48 it has been abused,” Young said of the Essential Air Service which pays airlines to provide stops in Alaska communities. “There’s people put in airports, some of the members of Congress put airports in their hometowns when there’s only another airport 20 miles away. But here we don’t have that alternative. We’re pretty sure the delegation is going to be able to protect the Essential Air Services for Alaska.”

Young was also thanked for his lack of support for a repeal of the Affordable Care Act, which which withdrawn from the House when it lacked the votes. Young said he expected to have another bill on health insurance before the House by July.

He also answered questions on climate change, enforcement of federal law on marijuana, cuts to the Environmental Protection Agency and a repeal of prohibited hunting practices on federal wildlife refuges in Alaska. Young is visiting numerous communities around the state as well as attending a conference on the arctic in Seattle.