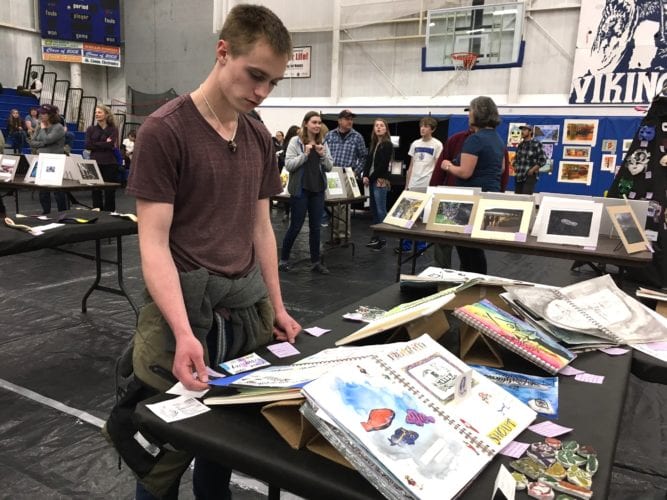 About 90 high schoolers from around Southeast, Alaska spent four days in Petersburg making art. The regional art festival known as Art Fest came to a close Sunday night with a show in the gym. KFSK’s Angela Denning has more:


Colorful art is everywhere, on the walls, on tables. There are sculptures, copper jewelry, leather masks, and carved wooden spoons. At a nearby table, people thumb through the pages of visual journals. Some of the journals feature homemade carved stamps. It’s all work students have created over the last four days while taking courses from several local and regional artists.

“It’s very rigorous,” says Ann Luetkemeyer, one of the instructors. She’s the Middle and High School art teacher in Wrangell. She led a course on making paper sculpture light boxes.

It’s layers and layers of paper cut outs that are back-lit inside a shadow box. 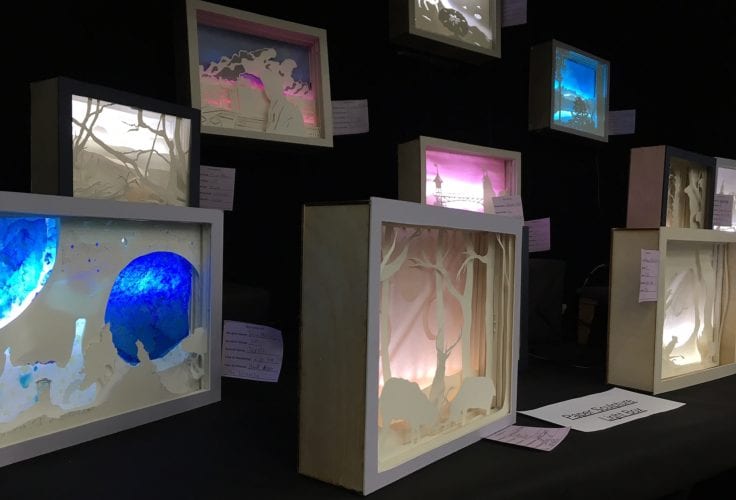 “They came out beautifully, a lot of cutting and X-Acto knives, so it’s a lot of detail work,” Luetkemeyer says. “I didn’t have any student that complained about the work. They were really focused, really engaged in it.”

But the long hours at the festival didn’t bother 17-year-old Zach Breen of Skagway. He chose a workshop on painting long boards using formline, the design in indigenous art of the Tlingit. He says it was difficult getting the design down.

“There’s certain ways to do it,” Breen says. “You start with a shape called an ovoid and then you kind of work off of that shape to create different animals.” 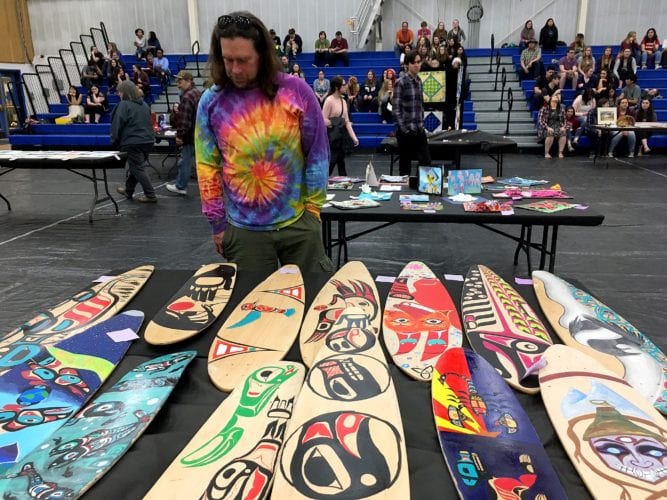 Another course was taught by instructor, Angela Imboden, from Juneau. She’s participated in Art Fest before. This year she was teaching a class called parallel pen wizardry. It’s creating designs through calligraphy but with special pens.

“We can do a lot of different types of strokes,” Imboden says, “and that’s what the kids learned how to do and then they put it together with calligraphy letters and then with tattoo designs.”

I ask her, “What did you think about the students that were at Art Fest this year?”

“I want to take them all home with me!” she jokes. ”They’re so fun, they’re so enthusiastic. Some of them had never done calligraphy and it was a little frustrating at first for some of them to get the thick-thin and the hang of how to hold the pen and how to do the different strokes but they stuck with it and they did beautiful work.”

Part of Art Fest is celebrating the students’ achievements through awards. Students cheer from the bleachers as some of them are called out for honorable mentions and best of shows. There are over a dozen categories. 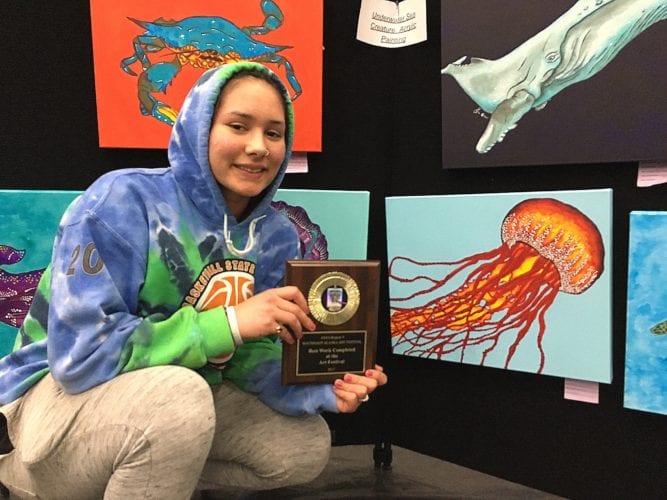 Senior Jacqueline Bennum of Kake poses with her Best of Show award for the jellyfish painting displayed here. Photo/Angela Denning

Receiving one of the top honors is Senior Jacqueline Bennum. She wins best of show for a jellyfish she painted using acrylics. It’s a bright reddish orange creature that pops out from a sea of pale aqua.

Bennum is from the village of Kake with about 600 residents. She has never been to Art Fest before. Kake doesn’t have an art program so Bennum’s history with art has mainly been sketching on her own.

“It was a really great experience coming here and getting to meet everybody,” Bennum says, “and coming from Kake and not having and art program it was a pretty great thing to get to express myself in ways that you don’t really express yourself back at home.”

She decided to go with the painting class because it was a practical art form she could share later on. 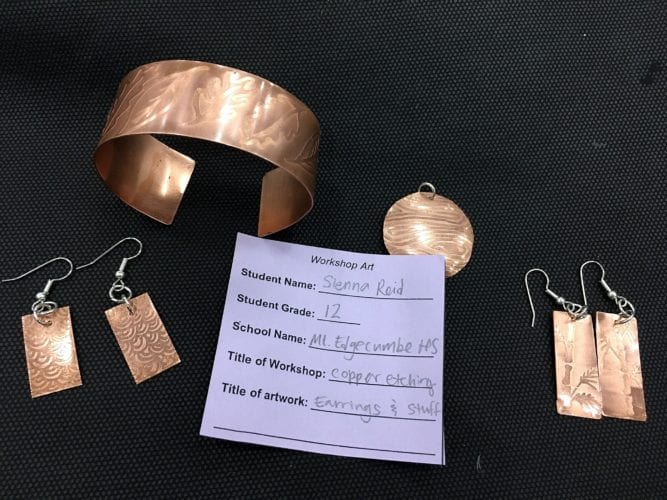 Copper etching was one of the classes taught at the Art Fest in Petersburg this year. Photo/Angela Denning

“It seemed like something I could actually really take back home and show them that it is possible to learn how to get into painting and stuff and it doesn’t require very much as opposed to like jewelry or carving,” she says. “It could be really self-taught.”

And it’s not limiting. She’s learned that there are many different ways you can pursue painting…which she’s eager to try out in the future.

Art Fest happens in Southeast every spring, hosted by different communities every year.

Other over-all festival awards are as follows: 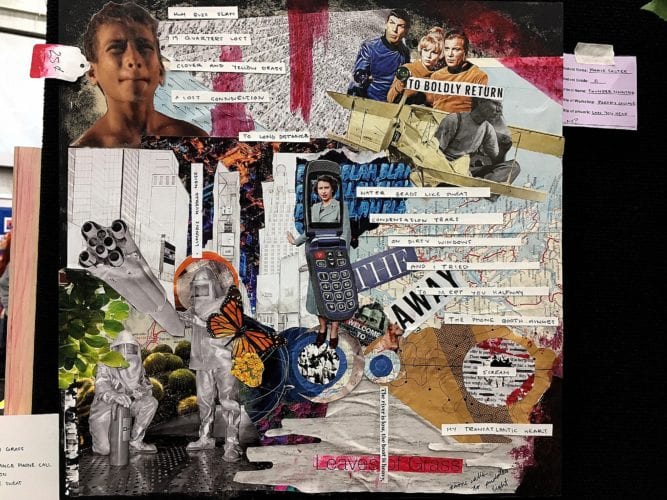 This poetry collage by Junior Ronnie Salter of Juneau won Best of Show in its category. Photo/Angela Denning