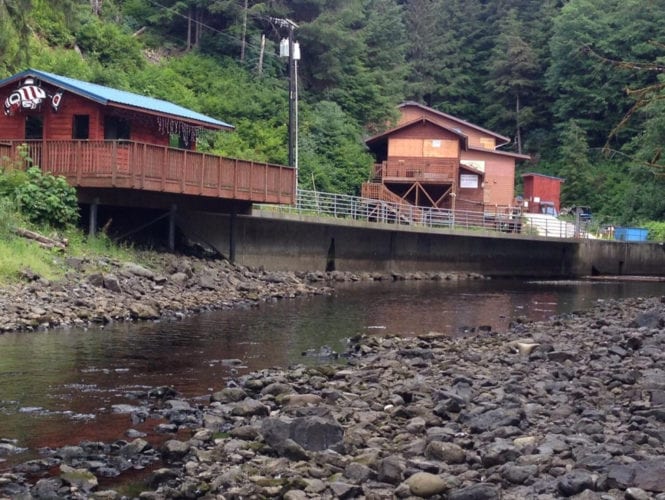 A regional fish hatchery private non-profit based in Sitka has purchased a hatchery in Kake that closed in 2014 under a mountain of debt. The Northern Southeast Regional Aquaculture Association, or NSRAA, plans to produce chum and Chinook salmon at Gunnuk Creek.

The Gunnuk Creek hatchery closed in 2014 owing around 22 million dollars to the state of Alaska. The state foreclosed on that debt and put the facility up for sale. Now it belongs to NSRAA, which completed the purchase this month.

Fred Parady, Deputy Commissioner of the state’s Department of Commerce Community and Economic Development, said the Division of Economic Development held title to the hatchery after foreclosure on loans to the prior owner, the Kake Non-Profit Fisheries Corporation.

“The division put the hatchery up for public sale via public notice and in doing so we were pursuing the best interest of the state in getting that asset back into production,” Parady said. “So the Kake hatchery is a permitted salmon hatchery and having it in production is far better than having it idle.”

Parady said NSRAA was the only bidder on the property.

“We were very happy to cooperate with the city of Kake and NSRAA in getting the hatchery sold,” he said. “We were in close communication both the city and tribe in Kake as we sorted out some easement issues. And one of the other doors the sale opens is to IPEC, Inside Passage Electric Cooperative, and their development of the potential hydro on Gunnuk Creek.”

IPEC is Kake’s electricity provider and is looking into building a hydro-electric power plant at an existing dam on Gunnuk Creek. According to a past study, that project could deliver about half of the diesel dependent community’s power needs.

With the purchase, NSRAA receives about three acres of land, the hatchery building, some residences and outbuildings, along with a small hydro generating plant and a pipeline that runs from the dam to the hatchery. When it re-opens it could employ a few permanent workers and other seasonal help for taking eggs from the returning salmon.

“It’s gonna take a couple years to get the hatchery program up and running,” Reifenstuhl said. “We’re gonna have to invest two and half million dollars to get there and then we’ve gotta wait, even though we can jump start this program by bringing fish from Hidden Falls to release in front of Gunnuk Creek, it still takes 3-4 years before those fish will be returning to Gunnuk Creek.”

Southeast Cove is a remote rearing site on Kuiu Island near Kake. Chums from Hidden Falls have been released there since 2013 and returns have been good in the first years, much better than releases closer to Hidden Falls. Over 200,000 chums are projected to return to Southeast Cove this year and cost recovery fishing on those returns will help pay for the upgrades at NSRAA’s newest acquisition. The Kake hatchery could also eventually produce chums for a new remote release site in Thomas Bay near Petersburg.

It won’t just be chums at that site. NSRAA has a permit to release 200,000 Chinook smolt there. Reifenstuhl said they don’t plan to produce those kings in Kake, because of the water quality in Gunnuk Creek, but will bring those fish over from Hidden Falls. He thinks those kings will have two benefits.

Both Parady and Reifenstuhl said they’d rather not disclose the terms of the sale.

“We got it for what we thought it was worth considering we have to invest $2.5 million,” said Reifenstuhl.

The hatchery in Kake started in 1973 as a high school project. Community members formed a non-profit and incorporated in 1976.

Dave Ohmer is plant manager at the Trident facility in Petersburg. His company has the cost recovery contract to catch NSRAA chums at Southeast Cove. He thinks the Gunnuk Creek purchase is good news on multiple fronts.

“There were jobs out there for a long time and activity, seasonal jobs for locals and things like that and with the closure that was lost,” Ohmer said. “I think just having more economic activity and job opportunities is fantastic. For NSRAA it gives them another site to be able to incubate and do some things and take brood stock and for fishermen, not directly with the buying of the hatchery facility, but just as Southeast Cove grows as a site for returning fish it’s going to be excellent for people here in central Southeast and trollers or fishermen out of Kake.”

The first young salmon are expected to go in the water at Gunnuk Creek in 2018.