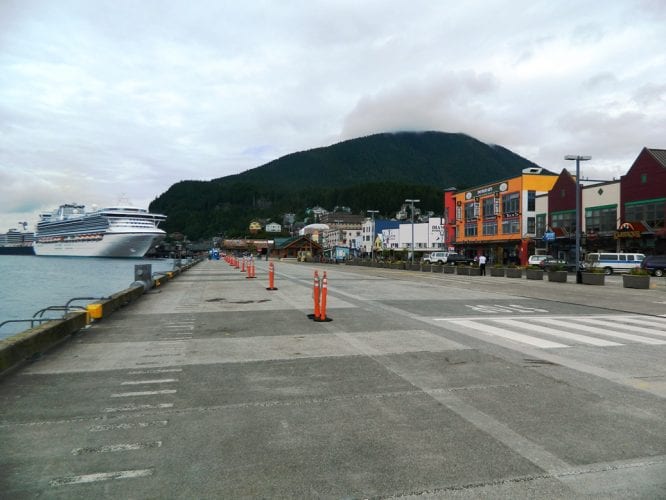 Ketchikan’s Berth 1 and 2, with a ship docked at Berth 3 in the background. (KRBD file photo)

Compared to other years, the state’s capital budget approved in late July is relatively sparse. It does have funding for some construction work in Southeast Alaska. Among the funded projects are replacement floats for a harbor in Wrangell, cruise ship dock improvements in Ketchikan and Hoonah and renovation of the headquarters for the Alaska Permanent Fund in Juneau. The legislature also authorized spending federal money on road, ferry and airport projects.

The capital budget this year amounts to $1.4 billion. Most of that, or $1.2 billion in the spending plan, is simply a decision on how the state plans to spend federal payments. Some of the construction work is funded by the state however.

Harbor master Greg Meissner said the concrete float there is 38 years old, well beyond its useful life. It will be replaced with a new wooden float.

“In the condition that thing’s in every year you lose another stall, they just start to rot, they fall apart,” Meissner explained. “It’s a balance of how much money you throw at this thing to keep it functional. So overtime you lose more and more moorage with this thing. You either got to pump a lot of money into an old derelict or you replace and we finally got the chance to replace it. So it’ll give us the opportunity to put a few more boats in there of the commercial size and offer almost everybody that has a need out there a spot.”

That harbor is used by commercial fishing boats and pleasure craft. Meissner expects the total project cost could wind up around $11.5 million. The city has some money saved up and will have to bond for some of the cost of the work. Meissner thinks the work could start up next year.

There are also several projects funded by the state cruise passenger vessel tax. Two and a half million will pay for safety improvements and new mooring buoys for cruise ships to anchor near Hoonah. Right now the community can accommodate one ship at its dock near Icy Strait Point.

Mayor Ken Skaflestad explained the ultimate goal is dock space to allow two cruise ships to tie up at once. “In the interim, this being a phased approach to additional docking in the future, this’ll provide secure moorage much closer to shore, reducing the lighterage expense of that additional vessel,” Skaflestad said.

The city of Hoonah and Huna Totem have partnered on the dock project for the Native corporation’s Icy Strait Point tourist destination. Skaflestad expects the second dock space eventually could cost around seven or eight million dollars.

“We’re thankful we’re getting it and it’ll go to good use,” said Ketchikan’s port and harbors director Steve Corporon. “I just can’t tell you exactly where it’s gonna go to use yet ‘til we finalize our budget with the city council this fall.”

Corporon said Ketchikan has an engineering firm working on a port development plan for larger ships that cruise lines are starting to use. “In January of this year Moffatt and Nichol presented their study to the city. It had numerous projects, both near-term, mid-term and long-term to address it. If you add up the cost of all these possible projects it’s between 50 and 70 million dollars. We’re gonna be working with the city council as we put our 2018 budget together this fall, identifying where this two million dollars for port improvements is going to best fit the puzzle, working towards several of these projects, both near term and mid-term.”

As for other Southeast projects, the capital budget funds just over four million dollars for renovation of the headquarters of the Alaska Permanent Fund Corporation in Juneau. There’s also a 75,000 dollar organizational grant for the state’s newest second class city, Whale Pass on eastern Prince of Wales Island. And there’s over 4.4 million for finishing up Alaska Class ferries under construction at Ketchikan’s shipyard along with 11 million for work on the existing Alaska Marine Highway fleet.

Other transportation projects are not listed specifically in the budget document. Instead, this year the spending plan authorizes block amounts statewide, 580 million in federal funding for surface transportation, nearly 130 million for international airports and another 140 million for rural airport improvements.

With no named projects for those dollar amounts, the Alaska Department of Transportation has already determined its top priorities around the state and in the region. For surface transportation, roads, trails and ferries, those are dictated by the Statewide Transportation Improvement Program. That means in Southeast over 55 million, most of it federal money, will go to the reconstruction of the Haines Highway. DOT also plans bridge, road and ferry berth work in Ketchikan, road rehab in Skagway and Juneau and bridge work in Pelican.

As for airport projects that agency plans design work for an airport in Angoon, rehab work and improvements to the taxiway and runway in both Haines and Klawock, planning for Ketchikan’s airport and a land purchase at Sitka’s airport.