Southeast researchers are keeping up with the humpbacks 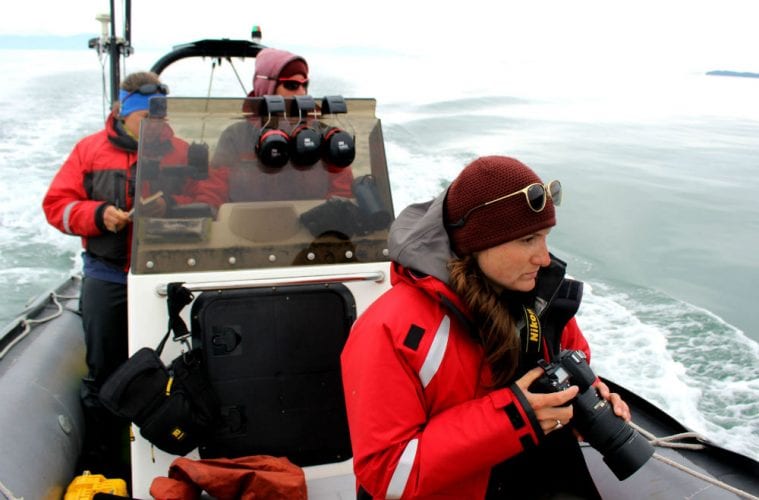 When animals are removed from the Endangered Species List, who keeps tabs on them? Often, the work of monitoring populations falls on volunteers.

This is true of one of Southeast Alaska’s most iconic seasonal visitors – the humpback whale. KFSK reporter Nora Saks spent some time in the field – or in this case, on the open water, with researchers have banded together to keep a close eye on these beloved marine mammals.

28 year-old Madison Kosma is perched on the bow of an inflatable raft, aiming her camera at a humpback whale working its way through Frederick Sound, north of Petersburg.

Kosma thinks of it like a game. It’s one that requires fierce concentration, and a surplus of patience, because whales are constantly moving targets.

“It’s like playing 2D chess with someone who’s playing 3D chess,” Kosma said. “And they always know where we are but we have no idea where they are.”

Kosma needs crystal clear shots of its fins, body and especially the fluke, because each one has a unique pattern. When she gets them, she rattles off numbers to her colleague, who jots them down in a waterproof notebook.

A pleasure craft motors over. Kosma yells across the deck, announcing that they’re researchers with the Alaska Whale Foundation and that they’re part of a big effort to photograph and document every humpback passing through this section of the Inside Passage.

“We just wanted to let you know, so you know we’re not some ‘randos’ harassing the whales!” Kosma said.

Afterwards, once the snapshots are taken, the crew zooms off. A few miles away, there’s a whale lounging cooperatively near the surface. The captain idles the boat parallel to it.

Kosma sets her camera down, picks up a crossbow and loads it without a word. She chooses a moving mark on the charcoal-colored mass, takes careful aim, and squeezes the trigger.

The arrow sails through the air and appears to glance off the whale’s side. It flicks its tail defiantly, and disappears with a splash. Kosma retrieves the arrow and removes the specialized tip, or bolt.

“The bolt does that big core sampling like a tree. But this has a barb on it, so once it goes in, it can’t come out. Once it pulls out,” Kosma said. 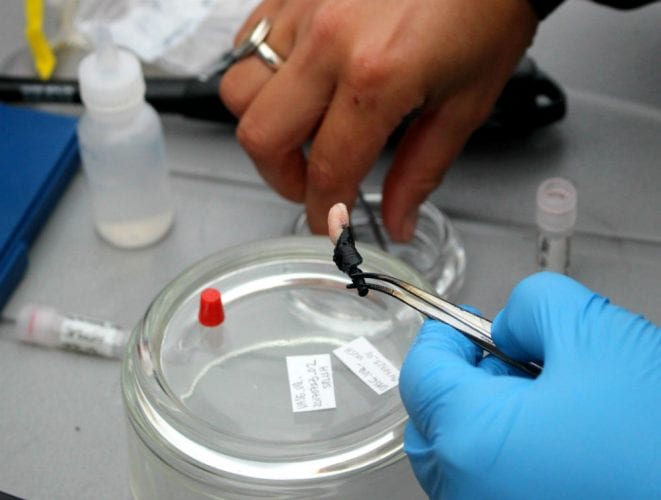 And, it worked. It’s filled with a crayon-sized amount of glossy black skin and blubber that is bubble gum pink. This is the way to get a biopsy, and Kosma knows that from the outside, it might not look like conservation.

“But then if you look on the inside, the crossbow is actually a child’s crossbow,” Kosma said. “It’s not that powerful. It’s kind of like giving the whale a shot or a bee sting.”

And, this one tissue sample contains powerful stuff. It will reveal the whale’s genetic fingerprint, and much about its biology and life history.

It’s all for a project called the Survey of Population Level Indices for Southeast Alaska Humpbacks. That’s a mouthful, but everyone calls it SPLISH, which is a lot more fun to say.

SPLISH involves teams from seven independent research groups, fanning out across the waters of northern Southeast Alaska during the same two-week period. Their goal is to find out how many humpbacks there are, where they are and how well they’re doing.

It’s a mini version of a larger project called SPLASH that was done over a decade ago.

That’s because, while most humpback populations were recently removed from the Endangered Species List – there’s very little federal money to keep monitoring them long term.

Phil Clapham is a large whale expert with the National Oceanic and Atmospheric Administration.

“The funding tends to go towards those species for which we know there’s a management problem, which are in some cases in the public eye. The thing about humpbacks is they’ve come back screamingly well,” Clapham said.

But not everyone agrees. Professor Jan Straley isn’t as comfortable calling it an ecological success story just yet.

“Not in Southeast. Not what I’ve seen in the last year. I’m not convinced the whales are doing that well,” Straley said.

Straley is a veteran marine biologist at the University of Alaska, and one of the brains behind SPLISH. She and her colleagues have recently noticed humpbacks that look sickly, and have fewer calves.

Straley wonders if the population is just reaching carrying capacity, or if the conditions in the ocean are changing so rapidly that they’re struggling to keep up.

Either way, and it could be both, it’s too soon to tell.

“If it shows that there is an issue with the health of these whales, we’ve got something big happening,” Straley said. “Or maybe not big, but at least something is happening that we don’t know yet.”

For now, Straley and her collaborators in the science community are keeping close tabs on humpbacks in the region, on a shoestring budget, with a lot of help from volunteers.

Volunteers like the ones on the inflatable raft. As the sun begins to set, the crew is still on the water, buzzing from GPS point — to whale — to GPS point.

It’s been a wildly successful day in the field, their best one yet. They’ve documented almost 30 whales, snapped over 300 photos and gotten two biopsies. But spending 12 hours with the same four people on an inflatable raft the size of a kiddie pool, with no protection from the elements, can cause even the hardiest of spirits to sag.

But then, the group gets a special surprise. Big bubbles appear on the sea’s surface and start swirling clockwise, forming a perfect circle that perks everyone up.

Three humpbacks emerge from the depths, right in the center of the ring, like the mighty cetaceans of the apocalypse. Their mouths are hinged open to gulp down massive quantities of fish. This is a cooperative feeding strategy called bubble netting. And it is a sight to behold.

“I’ll be so bummed out, and then it’s like boom! There’s a huge group of bubble netters, and then I’m warm again, there’s blood in my fingers, blood in my toes. I’m pumped, I’m excited, I’m awake,” Kosma said. “It’s just incredible.”

Even after a long day of repetitive wildlife spotting, for Madison Kosma, this still feels like something exceptional. 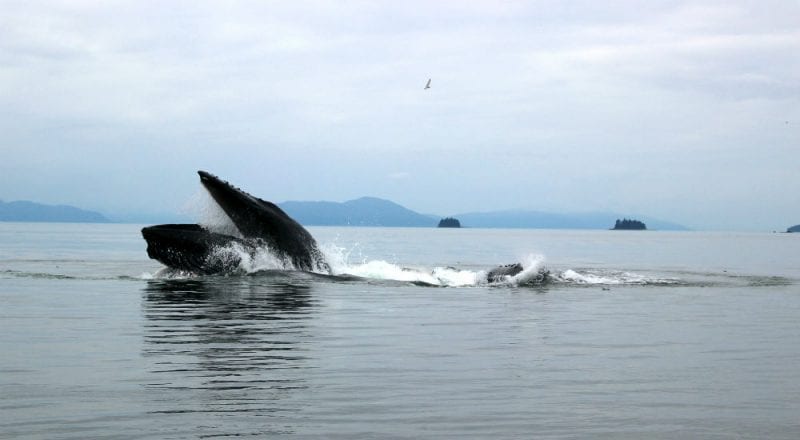 Three humpbacks treated volunteers to bubble net feeding at the end of a long day on the water. Permit 18529 issued to J. Straley. (Photo – Nora Saks)