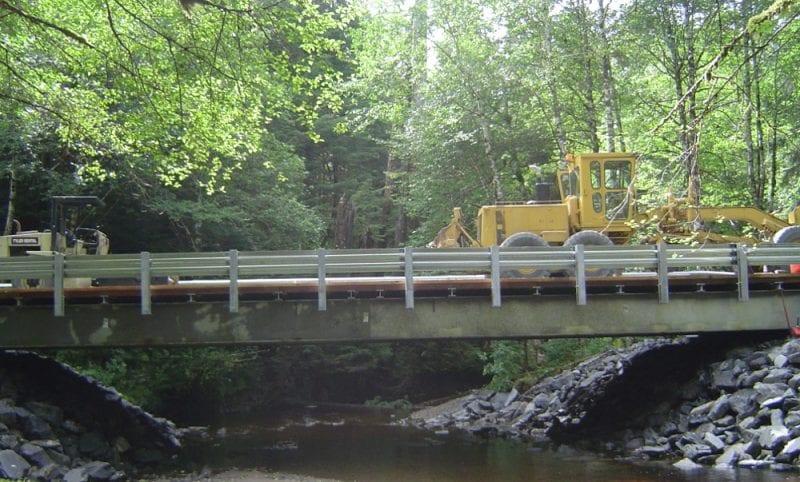 The newly installed bridge over Falls Creek on Mitkof Island’s Three Lakes Loop Road more than 10 miles south of downtown Petersburg was scheduled to be opened for vehicle traffic on August 31st. (Photo courtesy of US Forest Service)

A U.S. Forest Service road on Mitkof Island south of Petersburg has reopened this week after a contractor finished installing a new bridge. A portion of the northern end of the Three Lakes Loop Road has been closed for most of August while the bridge over Falls Creek has been replaced. It’s more than 10 miles south of downtown Petersburg. The road is used by people cutting wood, hunting, fishing or working in the forest on the central part of the island. 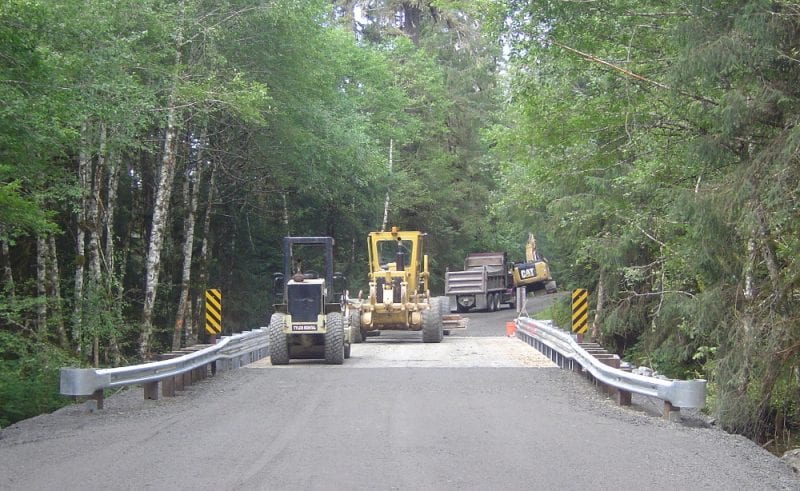 Construction machinery on the new bridge over Falls Creek on Three Lakes Loop road on Mitkof Island south of Petersburg August 29th, 2017. Rock-N-Road Construction of Petersburg was contracted to put in the new span this month. (Photo courtesy of US Forest Service)

U.S. Forest Service spokesman Paul Robbins explains the Falls Creek bridge is one of a number that have been swapped out or fixed this year on the 16.8 million acre Tongass National Forest.

“We have replaced quite a bit and repaired quite a few bridges on the Tongass so far this year with many more scheduled,” Robbins said. “Bridge replacement repairs across the Tongass are part of a regular and ongoing maintenance to ensure access and safety for our forest users.”

Rock-N-Road construction of Petersburg won the contract for the Falls Creek bridge totaling just over 424,000 dollars. That company hired design engineers, hydrologists and a land surveyor to design a new span that could withstand a high level of flow on Falls Creek. It was designed by an engineering firm in Missoula, Montana and fabricated by a company in Plains, Montana. The construction crew that installed it was all local residents.

The old span, made of four treated, glue-laminated wood beams, was built in 1965. One of the four beams had some rot. All four were removed and shipped to a forest science lab in Madison, Wisconsin for testing. 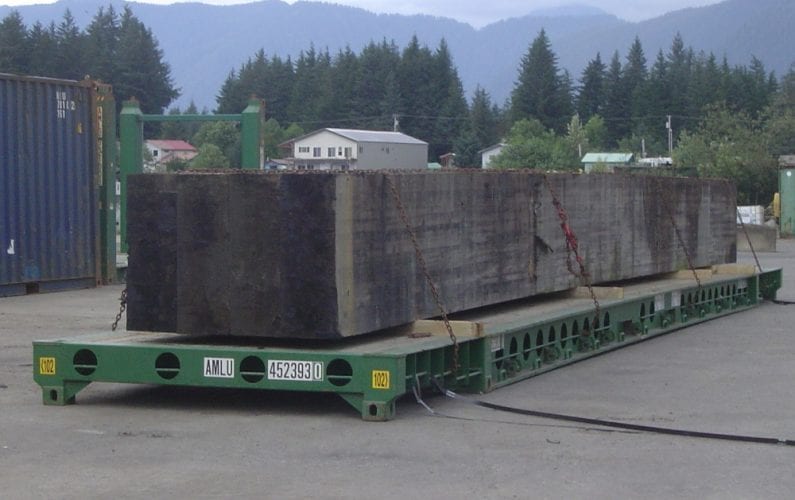 The new bridge is 20 feet longer than the old one, constructed with steel girders and a treated wood deck resting on a concrete foundation. It’s estimated the new span weighs over 188-thousand pounds and is designed for tractor trailers trucks up to 36 tons or up to 80-ton loads by permit. 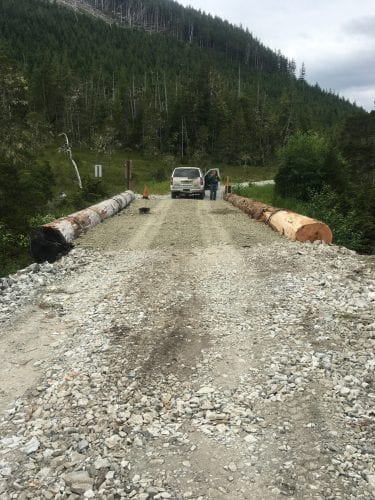 A log stringer bridge on Zarembo Island near Mustang Lake was repaired this summer. (Photo courtesy of US Forest Service)

Three other bridges have been replaced on national forest land near Hoonah this year and six more in that area will be done next year. Robbins said another bridge was repaired this summer near Mustang Lake on Zarembo Island, between Wrangell and Petersburg.

“It was repaired in July with one of our partners Evergreen Timber. Anytime we get a chance we wanna bring partners in to try and work on these projects as well. The reason it was repaired is it only had a five ton load limit and that prevented access for a lot of equipment whether it was logging or other traffic to go further down that road. So the repair actually raised the load limit for that bridge so it will gain more access to that community.”

A new bridge was also put in near Coffman Cove on Prince of Wales this summer.