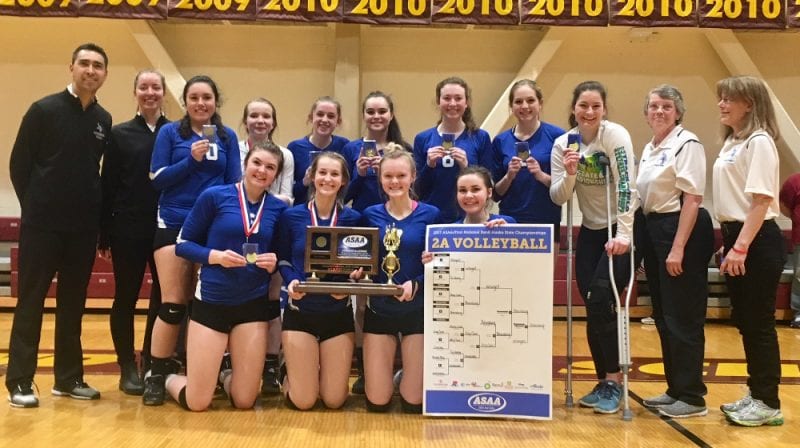 Petersburg High School’s volleyball team is the 2A state champion.

The Vikings lost to the Wrangell Wolves on Friday night in four games in a semi-final match after losing senior Elisa Larson to an injury. Wrangell won the first game 25-15. Petersburg won the second 25-16 but then the Wolves came back to take the next two 25-22 and 29-27.

“Well she was a huge part of our team mentally,” said senior Kaia Dahl of losing Larson during that match. “She was great at picking us all up and it was important for us to know how to adapt to overcome not having her on the court.

Senior Tanya Spears said the team was not mentally in the right spot in that match but the team was able to adjust. “I think losing made us want it more than we’ve ever wanted it and I think it was a good little reality check,” Spears said.

After that defeat Petersburg was able to battle back through the loser’s bracket, beating King Cove on Saturday in three games to make it back into the championship match of the double elimination tournament.

Petersburg had faced Wrangell multiple times in the regular season and at the regional tournament along with the three matches at state, but Petersburg’s seniors were not tired of playing the Wolves.

“We’re competitors on the court but we’re great friends off the court so it was kinda cool to have Southeast represented in the championship game,” Dahl said.

“Yeah, especially for the second year in a row I think it was super awesome that we were able to play them,” Spears noted.

The Vikings were runners up last year to the Craig Panthers and came in third at state the year before.

Seniors LeAnn Lapeyri and Elisa Larson won good sports awards at the state tournament. Dahl, Spears and Martha Johnson were named to the all-tournament team. Larson, Spears, Dahl, Katie Brock and Courtney Fredricksen were also named players of the game at the tournament.

It’s the third state championship in as many years for Petersburg High, following wins by both the girls and boys basketball teams. A noise parade to honor the team is planned for Tuesday afternoon.