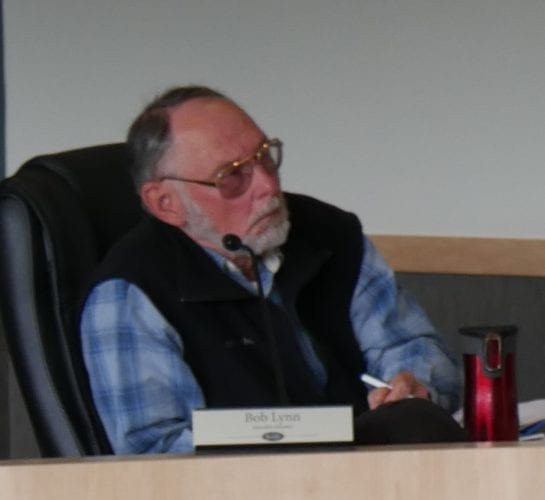 Petersburg’s borough assembly Monday voted a second time on who to appoint to the board of a joint agency that oversees hydro-electric power plants in southern Southeast Alaska. The assembly opted to stay with the same voting member on that board, chose a different alternate and agreed to stay away from anonymous balloting in the future.

The assembly November 20th used an anonymous ballot, writing names on scraps of paper, to appoint former assembly member Bob Lynn as the voting representative from Petersburg to the board of the Southeast Alaska Power Agency. Mayor Mark Jensen was appointed the alternate.

“The procedure we used is one that we’ve used in the past and it’s not proper according to our attorney,” Jensen said Monday. He and the borough clerk decided the appointment should be back on the agenda and he proposed appointing his brother John to the voting seat instead of Lynn.

“And if we would have used the proper procedure on the meeting on the 20th I would’ve done the same thing I intend to do today is to try to appoint the voting member as John Jensen and the alternate as myself,” the mayor explained. “The reason I would do that, I’m not discrediting Mr. Lynn’s knowledge and his ability it’s just John’s been there since before the divestiture of the Four Dam Pool and Thomas Bay Power Authority and then on SEAPA. And in fact Ketchikan mayor Bob Weinstein appointed him to be their representative once because our two representative positions were full.”

SEAPA owns the hydro-electric power plants at Swan Lake near Ketchikan and Tyee Lake near Wrangell. It sells electricity to utilities in the three communities. The Four Dam Pool included Swan and Tyee, along with other projects in Kodiak and the Copper Valley. That split up in 2009 leading to the joint agency between Petersburg, Wrangell and Ketchikan. The Thomas Bay Power Authority used to operate the plant at Tyee.

Lynn, who worked with the U.S. Forest Service for 30-years, told the assembly about the experience he would bring to the seat.

“As a former Tongass National Forest supervisor, I selected the personnel, set the team objectives and approved several of the existing transmission lines that are currently used by SEAPA and the former Thomas Bay Power Authority,” Lynn said. “I have followed the actions of SEAPA before while on the assembly, so I am not without some first-hand knowledge.”

Lynn also said he had reasonable experience with water diversions, hydro-electric projects, dam engineering, electrical transmission and agency coordination.
In lieu of the old system of anonymous ballot, borough clerk Debbie Thompson proposed an open roll call vote, with assembly members making a motion on the suggestion of the mayor. Under that new procedure, assembly member Brandi Marohl moved to appoint, first John Jensen, then Mark Jensen to the voting seat. She received no second. That left Jeff Meucci to move to appoint Bob Lynn. That motion got a second and it was approved 5-2 with Jensen and Marohl the “no” votes. Then Marohl moved to appoint John Jensen as the alternate. That also received a second. John Jensen was voted to the alternate seat by a 4-3 vote. Assembly members Eric Castro, Jeff Meucci and Nancy Strand voted against that appointment.

“On November 20th I thought even though we went about this procedurally wrong, I think our vote should have stood as they were and gone about it in the future,” said assembly member Jeigh Stanton Gregor. “Just because we voted in secret ballot like we have on many other things, I found it frustrating today that we’re having to try to nominate against the previously mentioned will of the assembly but it is what it is and the group has agreed to move forward on that.”

To be clear the assembly and prior city councils have used the secret ballot for appointments only, not for other votes in open meetings, and only when there are multiple people seeking an appointment. And it’s been used to fill contested appointments to vacant seats on other local boards and commissions. But this assembly plans to end that practice and also plans to take an annual vote on a resolution on how they conduct their business, including appointments.

Meanwhile, Monday’s vote means John Jensen makes it back on the SEAPA board but as the alternate member. Bob Lynn will be the voting member for the upcoming year. The SEAPA board meets in Petersburg December 13th and 14th.

(Editor’s note: The vote on John Jensen’s appointment to the alternate seat has been corrected.)