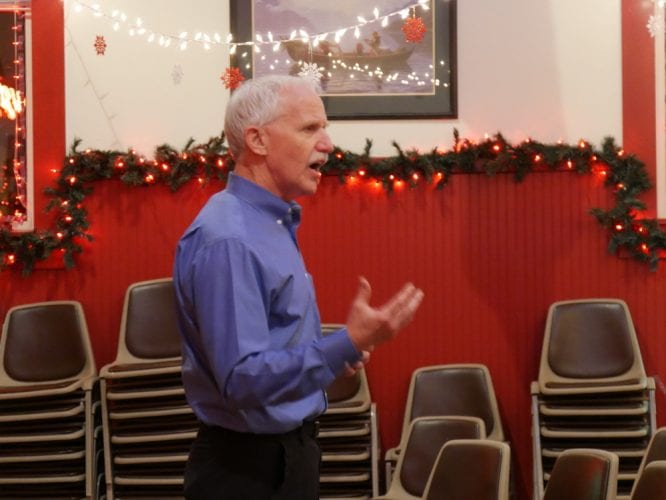 A panel of local and state officials answered questions and heard input on the opioid drug crisis in Petersburg Thursday, December 14. They outlined efforts that are underway to address the problem along with some of the ongoing hurdles for treatment and support for people who are addicted.

The panel discussion was organized by state representative Jonathan Kreiss Tomkins and included Andy Jones, director of the state’s office of substance misuse and addiction prevention. Jones said the state officials were hoping to get some input and had stops in Craig and Ketchikan prior to coming to Petersburg.

“We’re really here to hear your guys’ concerns, your guys’ recommendations, your ideas,” Jones said. “I will tell you, travelling to Craig and Ketchikan yesterday, we just gained a wealth of knowledge from the community. We’re taking this information. We’re going to actually use it to draft up actions plans for the communities, for the state. So that as we’re working to actually build a system and a capability, we’re doing it together.”

Jones answered a question on increasing the options for treating people who are addicted. “You know we are working to expand treatment through some federal grants but we gotta do it in a very systematic approach,” he said. “So what I was saying is a lot of times communities will say, as we travel the state, I need detox, I need treatment. But you also gotta consider do you have the sober living homes? Do you have the peer recovery services? Because there is a timeline you know that detox and treatment does end. But so often recovery is a life-long event. So if you don’t have those support mechanisms in your community, the scary part is that could really set that individual up for that relapse and failure.”

Both the state and federal governments have issued opioid disaster declarations. In Alaska, that has meant widespread distribution of around 8000 kits to save someone from an overdose. Dr. Jay Butler, chief medical officer of the division of public health said last year 96 Alaskans died from opioid overdose. This year that number is around 81.

“I don’t want to over-promise,” Butler said. “I’d like to think we’re not going to go above 96 this year, but it has changed in that we have seen some, looks like, some pretty dramatic declines in prescription opioid overdoses but the number of fentanyl overdoses is at least three-fold higher so far this year compared to what it was last year.”

Fentanyl is a strong, cheap synthetic opioid that can be mixed with heroin, sometimes without drug users knowing. Local police chief Kelly Swihart told the audience he has not heard of fentanyl use here but said that did not mean it isn’t being used in Petersburg.

The state’s Butler said a shortage of facilities and providers for treatment in the state is still a challenge. He thought the expansion of Medicaid coverage has made a difference in making that treatment more available. Butler said this was his third year on the job with the Walker administration.

“Prior to getting the call from the administration I was a real doctor and I saw patients because of my specialty many of them were in recovery or actively using drugs and it was very frustrating,” Butler said. “Sometimes people get to that point, where they, most everybody gets to a point where they’re driven by the addiction. They want help. They want out of this. It was one of the most frustrating things I’ve ever dealt with as a physician to not know how to help these people. I think we’ve made progress over the three years. We’re not where we need to be but I think we’re heading in the right direction.”

He’s also part of a task force on opioid policy that came out with recommendations in early 2017.

Butler said the state is seeking is a waiver from the Centers for Medicaid Services which could help with availability of beds in treatment facilities in Alaska.

Petersburg Mental Health Services director Susan Ohmer said in her experience people were waiting four months to get into a treatment center.
She thought the current physicians in Petersburg are the best during her time here in terms of working with addiction. And Ohmer wanted more second chances for people looking for a job or finding a place to live.

“That would be my biggest, the biggest hole that I see,” Ohmer said. “That I would love for us to become a community that was more able to figure out, how do we give people more chances in a way that doesn’t make us resentful? That we can give people an opportunity to become healthy and be a new part of our lives and not get stuck in that, ‘I knew him since high school and he’s always been that way.’”

Ohmer is also part of a local group called the SHARE coalition, Supporting Health Awareness and Resiliency Education. That group formed in 2006 to respond to the problems of alcohol, substance abuse and suicide in the community. It meets once a month.

Some of the discussion focused on the supply of legal prescription medication, often cited as fueling the addiction crisis. John Havrilek said he was prescribed pain killers after a hip replacement and quickly decided he did not want the 50 pills prescribed. He ended up throwing them away.

“Big pharma’s making hundreds of billions of dollars pushing this crap and as you started off with at the beginning, that’s what’s starting this and keeping this going,” Havrilek said. “Is there any option at all to ban opioids or to legislate against them? Because if we didn’t have that going we wouldn’t have all this problem.”

The state officials pointed to House bill 159 passed this year which made changes for prescribing pain killers. For people looking to get rid of medication, there’s also a new prescription drug collection box in the lobby of the police station installed this year and various agencies in town also have kits for disposing of pills.

SHARE coalition member Mark Kubo warned against marginalizing people who actually need pain killers. “People who do suffer from chronic pain who do need kindof these strong pain relievers, they’re feeling stigmatized and shamed because they use these things now,” Kubo said. “I think one of the unintended consequences of kindof this focus on fighting opioid abuse is that people who legitimately need them are feeling marginalized now.”

Panelists also discussed law enforcement’s role in reducing the supply of illegal drugs. Police chief Swihart noted that drug users will switch what they’re using if the supply of one type of drug is cut off. And the state’s Butler pointed out that alcohol abuse still kills more people than opioids.

The state officials urged the community to address the underlying reasons why people are turning to drugs and alcohol and seek to connect with people who are suffering from mental health problems or trauma from earlier in life.

Since the forum in Petersburg, governor Bill Walker released his proposed operating budget for next year. He’s seeking a $34 million increase in state spending to help pay for expansion of treatment programs and additional investigators and prosecutors. That proposal will be up to legislature to consider when it starts meeting in January.